Considering it has spread all over the internet these past few days, youâ€™ve probably already read Masayuki Uemuraâ€™s insights into the development of the NES. Specifically, the Powerpoint image from the 30th anniversary presentation revealing that the NES was packaged with a light gun simply because â€œAmerica loves gunsâ€.

This week Wii U owners get to try out two NES Zapper classics for themselves- Wild Gunman and Hoganâ€™s Alley are both heading to the eShop, priced Â£3.49 each. You will however need a Wii Remote. We also suggest tracking down the surprisingly sturdy Zapper accessory that came packaged with Linkâ€™s Crossbow Training. And a copy of Ghost Squad. And House of the Dead 2 & 3 Return. That’s gaming bliss right there.

Anyway, we digress. Apparently Wild Gunmanâ€™s re-release is to coincide with Back to the Futureâ€™s 30th anniversary – in BttF Part II Marty McFly steps up to a then antique Wild Gunman machine to show off his skills to a couple of kids. One of which is Elijah Wood, would you believe.

The only other new Wii U release for this week is Just Dance 2016, at a reasonable Â£29.99. It launches alongside the new Just Dance Unlimited service – which offers 150 new songs and regularly added tracks all year long – with prices starting at Â£5.49 for a 30 day pass. 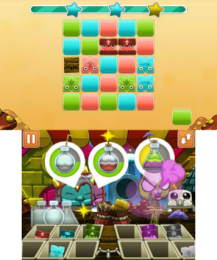 Speaking of 3DS, The Legend of Zelda: Tri Force Heroes – one of Nintendoâ€™s big Christmas hitters – is due out Friday at a slightly steep Â£34.99. Steep because itâ€™s currently Â£25.99 to pre-order at Base.com. Reviews are still under embargo. Hopefully itâ€™ll be lifted by the time we pen our weekly new release round-up.

Joining Link’s latest on the eShop are the colourful puzzler Wizdom (Â£8.99) and the pixel art 2D shooter Gunslugs 2 (Â£4.49), which launched on PC and Android back in January. Apparently itâ€™s not too bad.