Ignoring the fact that Platinum Gamesâ€™ staff probably resorted to sleeping in the office and putting in some serious overtime, Transformers: Devastation is proof of what a studio can achieve while on a tight schedule and what was likely to be a small budget too. Weâ€™d hazard a guess that it was more than the generally disliked digital-only The Legend of Korra tie-in but just a mere drop in the ocean when compared to the budget for the next Call of Duty.

But while Devastation may both look and sound the part, genuinely resembling the â€˜80s cartoon series in its garishly coloured glory, there is a hint of style over substance about it. Or to refrain from beating around the bush, it only takes around 5 hours to finish. The main reason to return is to beat the game on the hardest difficulty – as Platinum fans will know, many of their titles donâ€™t come into their own until played on the hardest setting – leaving just the numerous collectables to mop up. There are achievements linked to beating the game without ever alternating between the five playable Transformers to gain also, but itâ€™s fair to say that even the biggest G1 fans will struggle to find good reason to do so. 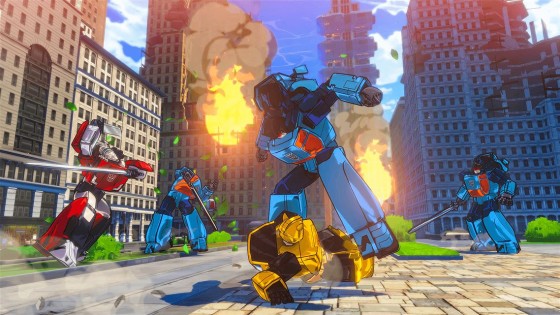 Of course, itâ€™s the G1 fans thatâ€™ll get the most out of this. Straight from the start itâ€™s evident Platinum has a secret passion for the Autobots of old, and in many ways this is the Transformers game that fans have always dreamed of. The plot is a slighter darker take on the events that would usually transpire during the Saturday morning cartoon – Megatron has stumbled on an ancient Cybertronian artefact and is using it to turn Earth into a new Cybertron. Each and every cut-scene fleshes out the storyline further, but not to a significant degree. Weaving the Insecticons into the story is a nice touch though, and a few unexpected faces show up towards the end.

The character roster is surprisingly lengthy, especially on the Decepticon side. True to the cartoon, most flee like cowards when first defeated, returning later with a few new attacks up their sleeves or buddying up with a fellow Decepticon. Usually we frown upon developers recycling boss battles, but here it never comes across as lazy. This is partly because melee combat is deeply satisfying, complete with â€˜80â€™s style explosions and neon laser fire. Platinumâ€™s own Bayonetta is the obvious influence for the combat system, featuring both a slow-mo ability – triggered by evading just at the right time – and the means of chaining attacks so that enemies can be struck in quick succession.

Whatâ€™s really neat though is that the vehicle modes are effortlessly blended into the combat system – Optimus can transform midair to crush enemies while in truck form, for instance. Turning on a dime, the vehicles get up to top speed quickly; vital for ramming enemies to break their shields or to start a combo. Vehicle sections are blended in seamlessly too, never feeling like filler or tacked on like in previous Transformers games. 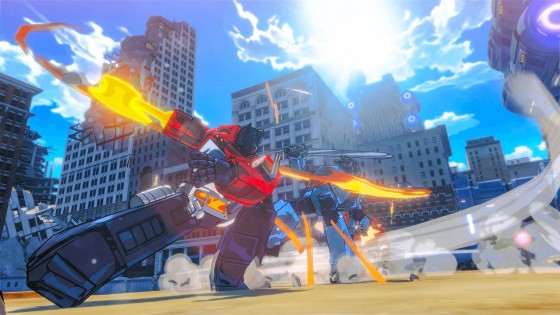 The majority of chapters are set inside a deserted city thatâ€™s perfectly suited for exploring in vehicle mode. The remaining chapters are a more linear and restrictive in design however, with the final chapter feeling more like a â€˜boss rushâ€™ mode. Itâ€™s still worth exploring the few nooks and crannies that they contain as thereâ€™s a rather compelling loot system in place. Cashes of new weapons are sometimes found in dead ends or uncovered by shooting switches in a certain order and such.

The list of weapons is surprisingly lengthy including various swords, axes, grenade launchers and sniper rifles, some of which hold elemental powers with different effects. Heavy weapons can only be carried by Optimus and Grimlock, allowing for some experimentation, while the sniper rifle makes gaining the achievement for 100 headshots a whole lot easier. Itâ€™s also easy to craft stupidly overpowered weapons with minimal effort and expense – the kind that can take down the likes of Soundwave with just two or three shots. Alas, this only makes a short game even shorter. 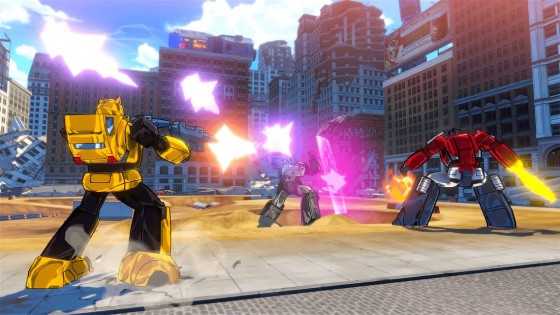 Every weapon can be levelled up and upgraded by consuming unwanted item against them, passing on their unique properties in the process. This is all carried out back at the Ark, where itâ€™s also possible to develop new stat-boosting tech, purchase new moves and swap between â€™bots. They all play slightly differently from one another, with Grimlockâ€™s move list focusing on grapples. Itâ€™s thoughtful touches such as this that really highlight how much effort has gone into Devastation. No character is misrepresented, from the Decepticonâ€™s cowardness and callousness to the delightfully dorky nature of the Autobots.

But while I did enjoy my time with Devastation, to the point where I do plan to go back and play through it again sometime soon, itâ€™s still hard to recommend something thatâ€™s almost full price yet can be beaten in an afternoon. As far as Transformers games go though, this sits comfortably between Atariâ€™s PlayStation 2 Transformers Armada tie-in from 2004 and 2012â€™s Fall of Cybertron.

Good Transformers games certainly donâ€™t come round often. At least we can class this one as being short and sweet rather than short and scrappy.