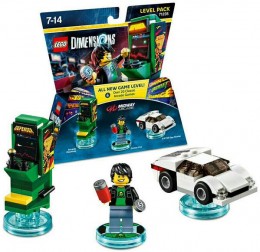 Other than the steep outlay, the fact that most of the add-on pack levels only offer around an hour of play seems to be the biggest criticism.

GameInformer wasnâ€™t impressed with the Portal and Simpsons packs at all: â€œThe best Portal and Simpsons moments are in the campaign. The open worlds for each brand donâ€™t offer much story content and mostly consist of fetch or escort missions. These worlds are entirely optional, and arenâ€™t great for anything other than mindless exploration and Brick collectingâ€ they said. We imagine the upcoming Midway Arcade pack – which contains over 20 arcade classics – will fare immeasurably better.

Most critics do seem to agree though that TT Games developing the whole thing internally has helped induce a degree of consistency. For those not aware, many of the additional Disney Infinity packs are handled by outside studios.

Hereâ€™s a round-up of all the reviews we could find:

8.75 – GameInformer: “Despite the extraneous content, Lego Dimensions is a hit. I haven’t laughed this much playing a video game in a long time. I couldnâ€™t wait to see what would happen next, and my wife even sat in to watch the story unfold in crazy ways. Whether you just purchase the core set or go bonkers purchasing figures, Lego Dimensions delivers big thrills and fun playability both in the game and on your living-room floor”

8.5 – God is a Geek: “Thereâ€™s no question that this will be an expensive hobby, but in (ever-so slight) defense of it, LEGO isnâ€™t cheap, full stop. But to those of you who love it, and enjoy the series (those frightened for their wallets stop reading right now), then really, this is kind of an essential purchase”

8.4 – Game Trailers: “If youâ€™re a fan of any property inside LEGO Dimensions, youâ€™ll appreciate their involvement in this grand venture, and you might walk away a fan of something new”

8.0 – GameSpot: “In any game within the toys-to-life genre, there’s sometimes an unspoken question: is this also a great toy or just a great game? In LEGO Dimensions’ case, the answer is easy: it’s both”

8.0 – Polygon: “While you can’t build anything in Lego Dimensions and the post-game play is mostly unstructured, it’s still the sort of game that makes we want to return and pick at its play”

8/10 – VideoGamer: “LEGO Dimensions is the most fun I’ve had with a LEGO video game since the whole idea was new back on the PS2. It’s full of cool new ideas and a story rammed with iconic references and witty humour”

3.5/5 – GamesRadar: “Lego Dimensions is the ultimate Lego game, a charming adventure that has glaring flaws. Its portal is a delight, but the reminders of the areas youâ€™re missing out on grate”