Prior to its late 2012 release, rumours circulated that Dishonored could be beaten within five hours. This prompted an unwavering waft of negativity, with some gamers even going as far as cancelling their pre-orders. While that rumour wasnâ€™t exactly untrue – it can be beaten in that timeframe if you zealously overuse the teleport ability, ignore all sub-missions and run past enemies – this is also the reason why Dishonored is an ideal candidate for a re-release.

Arkaneâ€™s magnum opus was designed with multiple playthroughs in mind, rewarding those who played in a certain way be it stealthily, violently or without purchasing any supernatural power other than the oft-required teleport ability. Those rewards range from extended cut-scenes to some rather elusive trophies and achievements for finishing the whole shebang without killing or alerting a soul. These are the kind of achievements that feel like a genuine honour to gain, and they certainly donâ€™t come easy. After completing the main campaign and the two DLC packs – The Knife of Dunwall and The Brigmore Witches – our time spent with Dishonored totaled 20 hours, and that was without taking the Dunwall City Trials challenge pack (which weâ€™d played on last-gen) for another spin. Those aiming for 100% completion are easily looking at around 50 hours of play. 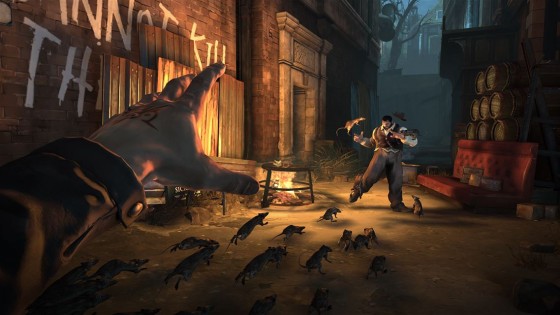 quiet and reserved for most part, but bold and brash when it needs to be

That time will be very well spent. Dishonored is a masterwork – quiet and reserved for most part, but bold and brash when it needs to be. You play as a Corvo Attano, a bodyguard with a skill set that would make the latest Assassinâ€™s Creed protagonist jealous. Possessing humans to scout ahead or lead them on a suicidal path is just the tip of the iceberg. After being framed for murder of an Empress, Corvo is falsely imprisoned. Times are grim not just for Corvo but the entire city in mourning – a plague is in full swing, leaving Dunwall in great disrepair. The rich and powerful have managed to escape the plague while sat in their ivory towers, leaving the poverty stricken to saunter the streets in a zombie-like state. Corvoâ€™s journey takes him from the richest areas – including an invite-only party with food and wine bountiful – to the downright trodden, including many rat-infested squalors.

Corvo isnâ€™t alone in his quest to restore his name and vanquish his betrayers. A small but well-rounded resistance party have formed a base in a pub near the city perimeter. Itâ€™s here that Corvo can rest, rearm and pick up the occasional sub-mission. A humble chap known as Samuel ferries Corvo to the next location; a simple man yet one thatâ€™s well-versed with Dunwallâ€™s current state of affairs, offering as much advice to Corvo as he can. After that, youâ€™re on your own.

To describe Dishonored as open-world would be inaccurate but not entirely so – missions and their objectives can spread across different areas, and there are many optional apartments and offices to explore either for Runes, which unlock new powers, or riches that can be used against upgrades. Corvo takes just a pistol and a wrist-mounted bow into battle, supplemented with different ammo types and improvements that enhance distance and power. Those expecting a whole wealth of arsenal will be disappointed but will soon learn that itâ€™s a better game for it. Weapons may be few, but theyâ€™re all useful in certain instances while items such as the spring razor mine – which is filled with coiled wire – are as vicious as they sound. 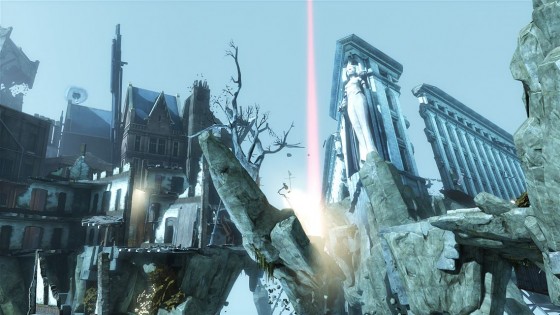 Itâ€™s the level design that really impresses though, even with Dishonored approaching three years old. Every single location features multiple routes, allowing exploration and experimentation. Sewer systems, rooftops, building interiors and the grim city streets – Corvo always has a choice of which path(s) to take.

It speaks volumes about the level design when even a mission set on something as narrow as a bridge offers an entirely nonlinear experience. Dishonored does however lose its way a little towards the end. After several hours of controlled chaos, in which itâ€™s possible to sneak and complete objectives in a non-lethal manner – usually the most rewarding option, incidentally – the story sees Corvo infiltrate an assassin base. Suddenly all plans for remaining ghost-like go out the window, for these assassins can teleport, ensnare with supernatural powers and drain Corvoâ€™s health rapidly by lobbing projectiles. Like it or not, the last mission or two will likely be spent in a frenzied state with little to no capacity to keep quiet.

This is the only real downer on an otherwise impeccably designed experience, save for some remarkably long loading times – a thirty second wait to reload a checkpoint isnâ€™t uncommon. At least the visuals benefit from the resolution boost. Dishonored was intended to resemble a water painting, with washed out pastel hued textures. Catch it in the right light, and at the right angle, and at times it does genuinely hold resemblance to a finely crafted watercolour.

it doesnâ€™t take long to reignite this old flame

Thereâ€™s another reason why Dishonored is the perfect candidate for a re-release. Two, actually – the aforementioned The Knife of Dunwall and The Brigmore Witches expansions. Itâ€™s believed that Arkane was instructed to hold off work on any significant DLC until Dishonored had proved itself to be a hit. As such, these two pieces of DLC were tardier than most and itâ€™s not hard to imagine some selling or trading-in their copy before they arrived. People such as ourselves.

These two add-ons are a treat to play, taking around 3-4 hours each and following on from one another. Itâ€™s even possible to carry on progress and items from the first add-on to the second. Theyâ€™re set alongside the events of the main campaign, only played from perspective of antagonist Daud. [Potential spoiler] The final mission retells the events of the main gameâ€™s ending, recycling the final location in the process, but donâ€™t let this put you off – there are plenty of other new areas to explore, including a partly submerged mansion – complete with a graveyard and an underground crypt – and a whaling factory in which enemies clutch bone saws. Thereâ€™s also a mission entailing a prison break-in, where it’s your call as to what cells to open. Cells that contain some very familiar faces, no less. Then thereâ€™s the Dunwall City Trials, which is something of an acquired taste. It certainly puts the skills of those well-versed with the game through their paces

Out of all the recent HD remasters, Dishonored: Definitive Edition makes the most sense. Even those who didnâ€™t overlook it first time round will no doubt find something to become smitten by, be it the belated DLC or the chance the take an alternative approach. Like a forgotten passion, it doesn’t take long to reignite this old flame.

Play it loud. Play it stealthy. We donâ€™t mind how, we just recommend that you do.