On initial inspection Flame Over appears alarmingly simplistic. As fireman Blaze itâ€™s your job to singlehandedly extinguish a raging inferno inside a London office block, occasionally stopping to escort citizens to safety. A tight time-limit is in place and a beady eye also has to be kept on water supplies, refillable at any water source. For every citizen saved an extra minute is added to the clock while leading a cat to the exit bags a bonus health point. Quite why there are so many cats inside each office is a mystery. Presumably the staff were having a â€˜bring your cat to work dayâ€™ when the blaze broke out.

Spend just a short while with Flame Over and its hidden depths quickly become apparent. Our intrepid hero canâ€™t remain next to a fire for long before taking damage, and as such itâ€™s essential to keep moving rather than lazily stand on a single spot while frivolously spraying water. Not only does Blaze take a hose into â€˜battleâ€™ but a fire extinguisher too – the only means of extinguishing electrical fires that emit thicker smoke. The upshot of sticking to the hose is that water douses the environments, preventing flames from spreading and reigniting previously extinguished rooms. 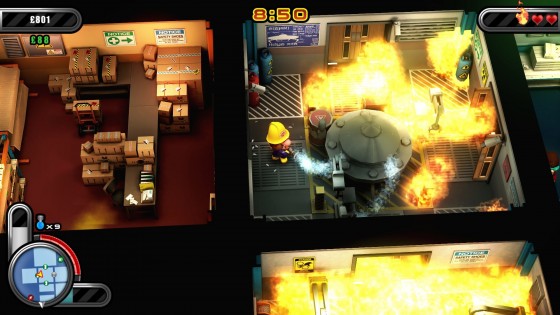 The wildly unpredictable nature of each inferno – coupled with the constant demand to swap between the hose and extinguisher – works wonders at keeping you on your proverbial toes. With the timer constantly ticking every second is precious too – dilly-dally for too long and the Grim Reaper will emerge. Fortunately his appearance doesnâ€™t instantly spell defeat as itâ€™s possible to give the ghoul the slip, forcing him to give chase while mopping up the final few fires.

If tapping into the random nature of fire wasnâ€™t enough to keep things feeling fresh, all levels are generated at random. Yes, weâ€™re in â€˜Roguelikeâ€™ territory here. The algorithms are incredibly sound with no dead-ends or anything of the sort. Often when the clock hits under a minute a citizen will appear in the very next room, setting the stage for a mad dash to the exit to add an extra minute onto the timer. Fetch quests likewise appear at random, as does a shop stocking three randomly selected items – everything from a more powerful hose to an extra supply of water grenades. 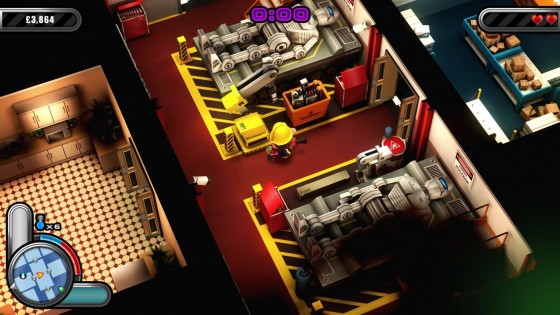 Completing fetch quests meanwhile bestows a token that can be used to access a store back at the main menu. The difference between these items and the ones purchased from the in-game shop is that they have permanent effects. Flame Over puts up a decent challenge, with each area requiring several attempts to eventually beat. With each and every item purchase chances of reaching the sixteenth and final floor increase. Itâ€™s worth pointing out that not all sixteen floors have to be beaten in one sitting – once a new area is reached itâ€™s then possible to start from that floor.

There is however a rather elusive Trophy to gain for beating the whole thing in one go, and another for doing so in under an hour. Rising up to this challenge is an inviting proposition – Flame Over is an instantly likeable game with appealing presentation, including a jazz soundtrack that fits surprisingly well, and an impeccably balanced difficulty level. Moreover, it has lost nothing during its jump from PS Vita to PS4. Itâ€™s just as compelling to play while sat on a sofa as it was on the toilet.