Itâ€™s not easy being a fan of match-three puzzlers. If there isnâ€™t some kind of saccharine-sweet license attached, then thereâ€™s often some horrid IAP system to contend with. EAâ€™s Bejeweled games are the exception, but even then thereâ€™s a stigma to overcome before becoming hooked. Specifically, the fact that bored housewives are Bejeweledâ€™s prime demographic.

Frozen Free Fall: Snowball Fight – available now as a FTP release on Xbox 360, Xbox One and PS4 – suffers from all of the above. The license is socially awkward – to the point where some may be embarrassed to have achievements from it feature on their profile – and out of all the FTP releases on Xbox this is easily the most money grabbing, requesting 79p from your virtual wallet to instantly continue a failed level.

That 79p extends to Â£7.99 for a fistful of power-ups and timer extensions, while the cost of unlocking all characters for use in multi-player is a rather extortionate Â£15.99. Refuse to pay up and youâ€™re stuck with Kristoff and his forever smirking mug. Kristoff vs Kristoff. Kristoff wins! 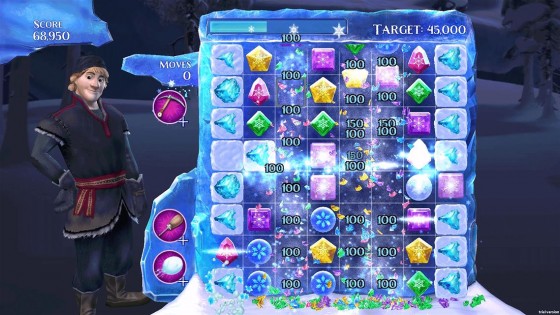 Of course, money isnâ€™t demanded straight away. The first fifteen or so levels are beyond simplistic, providing a handful of ‘free’ power-ups to try out and some ridiculously low score targets to beat. Final scores are often several times higher than whatâ€™s required. At the end of each stage Olaf then tells you that youâ€™re amazing and brilliant, gently easing players into the swing of things.

Thereâ€™s a fair bit of variety in the objectives, ranging from stages where a score must be beaten within a time-limit to stages where blocks of ice must be smashed by matching gems around them. Then there are the stages were a certain amount of a particular gem must be broken within a set number of moves. These stages quickly become commonplace and prove to be infuriating as you have no control over what gems appear next. You simply have to hope for the best. When the initial allocation of extra lives runs out youâ€™re then forced to play the waiting game. Or play something else. 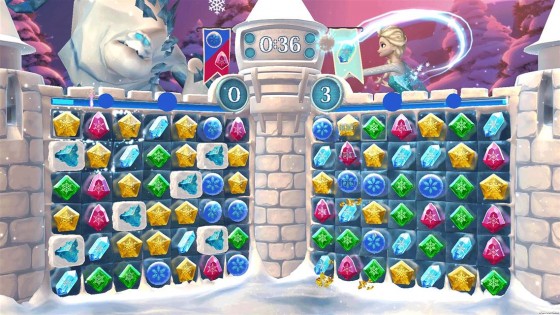 For a Disney production the presentation isnâ€™t quite as lavish as expected either. In the single-player mode the same tune plays over and over and there are no speech samples whatsoever. Slightly more upbeat music plays in the multi-player mode but thereâ€™s an odd lack of sound effects.

This mode isnâ€™t too bad though. The idea is to fill a power meter by matching gems. Once full your chosen character (read: Kristoff) will pelt their rival with snowballs, with the twist being that the barrage can be blocked if the opposition matches three gems while the word â€˜Incoming!â€™ flashes on screen. Every character has a â€˜favouriteâ€™ gem colour – matching these bestows a super snowball thatâ€™s more effective. Aside from an outlay to unlock characters there are no nagging IAPs here, which is mildly pleasing.

Whether youâ€™ll ever be able to coax a friend into playing multi-player is another matter entirely. Call us Captain Obvious, but surely a Marvel superhero match-three puzzler would have been a better fit for the console gaming demographic? Or Star Wars? Heck, we would have even settled for an Inside Out tie-in.