â€œWatch_Dogs was made by so many people that it feels like it was made by nobody at allâ€. We fail to recall which journalist said that – as does Google, bizarrely – which is a shame as that statement summed up Ubisoftâ€™s cybercrime adventure perfectly. The game’s development was such a large scale effort that it ultimately ended up with zero personality. Created by a tiny team in comparison, Grow Home is the complete opposite – a clear labour of love that has received plenty of attentive nurturing.

The connection between the two? Both are Ubisoft titles. Grow Home started out as a small experimental project within Ubisoft Reflections that over time, no pun intended, grew legs and evolved into a full release. Well, an indie-esque release – it’s currently free via PS Plus.

Thereâ€™s still an experimental feel to it, and a pleasing one at that. You control B.U.D (Botanical Utility Droid), a bright red robot seemingly influenced by those old-fashioned collapsible wooden puppet toys. As B.U.D starts to run he quickly builds momentum, staggering all over the place and occasionally toppling over. His clumsy nature – coupled with some incomprehensible robotic ramblings – gives the tiny chap a big personality. Disney Pixarâ€™s WALL-E has also been touted as an influence. Indeed, B.U.Dâ€™s quest does share some similarities with that of the trash compacting robot – grow a beanstalk of colossal magnitude and harvest the life-saving seeds once it blooms. 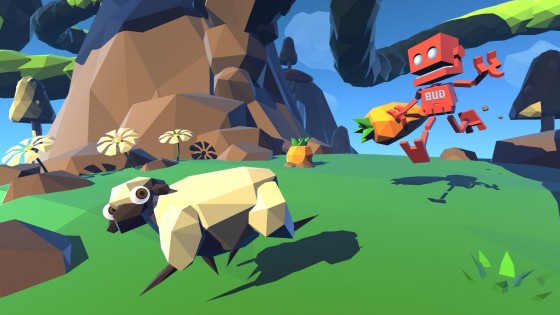 Itâ€™s one tall order, thatâ€™s for certain. B.U.D starts his adventure on a small island, with the beginnings of the beanstalk visible in the distance. Youâ€™re free to explore and interact with the other plants and creatures while becoming acquainted with the controls. The experimental streak notable right from this outset – B.U.Dâ€™s arms are mapped onto the joypadâ€™s triggers, allowing rock faces to be climbed and just about any object to be grabbed and dragged around, be it a carrot out of the ground or a hapless sheep. Or Meeps, as theyâ€™re affectionately known as here. Given time the controls soon become second nature – performing a last second grab to prevent a plummet to earth is oddly satisfying.

To propel the beanstalk onwards and upwards new shoots have to be grown, requiring B.U.D to scale the stalk in order to find flowering buds. Once found new shoots can be directed manually, with the idea being to guide them into glowing floating islands – the nutrients help the beanstalk grow, and once a milestone has been reached a large floating island can be accessed. Your reward? One heck of a view.

Teleports are found on some islands, helping to prevent B.U.D from having to work his way back from the bottom should the tiny tyke ever take an unfortunate tumble. B.U.D can also use flowers as makeshift parachutes, which makes reaching new floating islands and searching for buds somewhat easier. 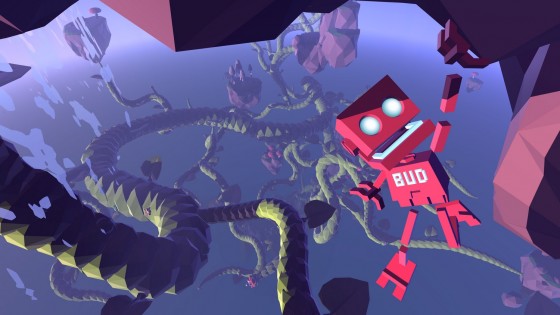 Thereâ€™s a strong sense of both progression and self-discovery throughout, while B.U.Dâ€™s mentor M.O.M provides gentle words of encouragement along the way. Each new location contains new fauna and flora ready and waiting to be scanned into a databank – a meaty little sub-mission – while collectable crystals improve B.U.Dâ€™s equipment and abilities. Even the low-poly minimalistic visuals hold much appeal, provoking memories of when 3D videogames were in their infancy. That and Bubsy 3D. (Joke).

Grow Home may only take an afternoon of your time, but it proves to be a memorable experience from start to finish – in this day and age of focus testing and whatnot itâ€™s a pleasure to play something that started out as a mere experiment. Like the saying goes, from tiny acorns mighty oaks grow.