No new Virtual Console releases are due this week, but worry not – Super Mario Maker has more than enough nostalgia to go around. 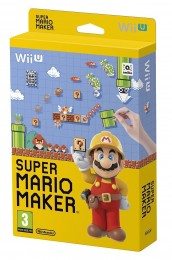 In addition to arriving at retail on Friday – packaged with an art-book as standard, and also available with a retro Mario amiibo – the incredibly well-received creation tool is also due for release on the eShop, priced Â£34.99.

Not everybody is smitten though – both The Metro and Cubed3 gave it 7/10 on the grounds that the toolset is â€œvery restrictiveâ€. â€œThereâ€™s also no ability to create a whole game using a world map or similar. You can chain together levels, and create sub areas, but thatâ€™s as complicated as the structure getsâ€ The Metro also noted.

Steampunk crime caper The Swindle (Â£9.99 until 24th September, Â£11.99 thereafter) hits Wii U this week too, as does Star Sky (Â£3.60) which is set in a starlight field and is billed as â€œan interactive poemâ€.

Over on 3DS SEGAâ€™s Hatsune Miku: Project Mirai DX (Â£29.99) makes its debut. Nintendo Life found much to enjoy in this rhythm action affair, giving it a lofty 9/10. â€œIts rhythm game core is inspired and addictive, the presentation is charming and fun, and there’s no shortage of activities to keep you happily busy between songs, with dress-up, interior decorating, choreography, and a full-on Puyo Puyo mode all providing enjoyable distractions from the dancefloorâ€ they said.

Etrian Mystery Dungeon (Â£34.99) is apparently worth a look as well, mixing elements from cult JRPGS Etrian Odyssey and Mystery Dungeon. Nintendo Life also reviewed this one, awarding it 8/10. â€œIt’s not always a perfect mashup – the randomly generated Mystery dungeons aren’t a patch on Etrian Odyssey’s memorable mazes, and the elaborate skillsets feel better suited to menus than button mappings – but the masterful mix of addictive exploration, strategic combat, extensive customization, and a real sense of adventure remains engrossing throughoutâ€ was their verdict.