Despite fast approaching its ten year anniversary, it didnâ€™t take very long for fond memories of Gears of War to come flooding back. We had the achievement for 25 active reloads by the end of the tutorial, managed to find most of the collectable COG tags during our first playthrough, took down General RAMM swiftly and soon got back into the swing of â€˜shotgun rollingâ€™ in multiplayer. Old habits die hard.

It offers the same bold and brash experience as in 2006, but this is something that can easily be seen as a drawback. Like the recent State of Decay revamp, the improvements over the Xbox 360 original are mostly in the visual department – the war ravaged planet of Sera has never looked better, with Epicâ€™s â€˜destroyed beautyâ€™ ethos shining even brighter now than before. The overgrown botanical garden in particular is a highlight, filled with all kinds of flora. But while it may look superb, and the campaign still flows seamlessly – even with the bonus inclusion of a previously PC-only segment – it lacks the refinements and improvements from the following Gears of War titles. 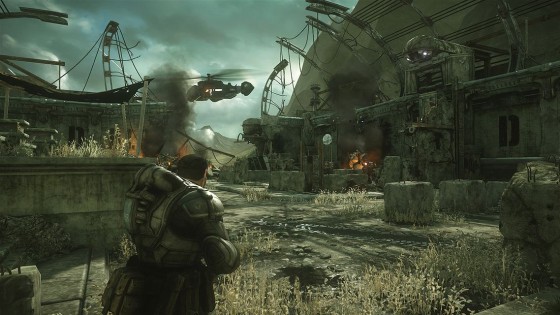 This means no horde mode, no lancer chainsaw battles and a stingy amount of multiplayer modes by todayâ€™s standard of seemingly never-ending playlists. The new ability to spot enemies in multiplayer is welcome, but it’s not enough to prevent online battles from being little more than shotgun-fuelled rampages. Newcomers will soon learn to make good use of valuable spawn protection time.

the hardest sell weâ€™ve come across in quite some time

Ah, newcomers. Those who have never played Gears of War will likely be surprised by how well the campaign holds up. The story isnâ€™t exactly pushing boundaries but thereâ€™s a rare air of consistency about it, entailing Marcus Fenix and his group of burly Gears soldiers on a last ditch attempt to quell the Locust Horde – a race of reptilian humanoids that dwell deep underground.

Despite a far smaller enemy assortment than we seem to remember thereâ€™s a fair bit of variety at hand. Standout moments include the trio of battles against blind Berserkers – which can only be harmed by the ridiculously overpowered Hammer of Dawn – plus a mission set during nightfall in which itâ€™s crucial to light up the path ahead. There are a couple of irritating moments (teammate AI is still pretty lousy) but for most part the campaign is enjoyable, if over a little too soon. Play it on casual difficulty and it can easily be licked in around 5 hours. Possibly even less if a co-op buddy has your back. 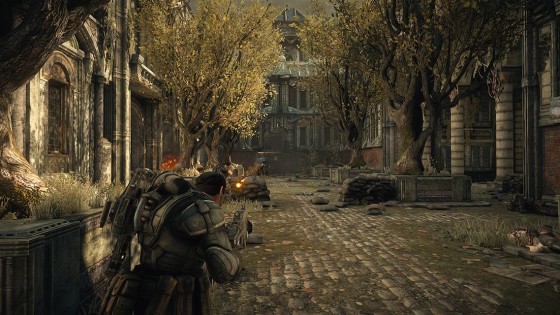 Problem is, itâ€™s doubtful that there are that many gamers who havenâ€™t experienced Gears of War before. Its ripe old age even makes Borderlands 2 – one half of the recent Handsome Collection – seem like a mere whippersnapper. Itâ€™s understandable that Microsoft wanted something Gears of War shaped to fill the void between here and now and Gears of War 4, but we would have much rather seen a remake of the far superior Gears of War 3. Perhaps we should just be grateful that those who play GoW: Ultimate Edition during launch will receive backwards compatible versions of Gears 2, 3 and Judgement for free. This doesnâ€™t bring GoW: Ultimate Edition up to the standard set by The Master Chief Collection but Microsoftâ€™s generosity here hasnâ€™t gone unnoticed.

Full of guts and grizzle and deeply satisfying shooting mechanics, Gears of War remains a very good game. Yet, this is still the hardest sell weâ€™ve come across in quite some time. When the rumours of its existence started to mount we did in fact envision it being given away for free as a â€˜Games with Goldâ€™ title – in order to coincide with Gears of War 4â€™s E3 reveal and E3 in general – or launching at an impulse price point of Â£14.99 (or thereabouts) due to age. As such, the Â£29.99 price tag is difficult to swallow. We wonâ€™t deny that starting points are an important part of a franchiseâ€™s history, but this isnâ€™t Gears of War at its finest.