Bad games. We’ve seen plenty since this site started in 2001, but in this day and age of big budgets and high expectations they’ve started to become few and far between. Godzilla on PS4 was the most recent, and itâ€™s fair to say that many were surprised by how awful it was. We’ve come to expect competency.

Every few years though we see the release of something that sets tongues waggling, and not for the best of reasons. Games so dated and unfinished that itâ€™s almost a miracle they managed to end up in consumerâ€™s hands.

Inspired by the negativity surrounding Devilâ€™s Third – which is finally released this week after a seven year development cycle – weâ€™ve rounded up five games that managed to escape development limbo.

Credit goes to Gearbox and Piranha Bytes – they managed to take something that was stuck in gaming purgatory since 1997 and turn it into an experience that was merely mediocre. Not terrible, but certainly dated. But it wasnâ€™t just the action that felt like something from the past – many found the Duke himself a man out of time. His corny one-liners and uber-macho visage may have seemed cool in the â€˜90s, but todayâ€™s gaming icons are rarely as shallow.

Boss battles, gun turret sequences, first-person platform jumping elements and a multi-player mode entitled â€˜Capture the Babeâ€™ – thereâ€™s no debating that Duke Nukem Forever was a relic from days gone by. Yet, it was playable – using the True Achievements website as a source, roughly half the people who purchased a copy finished the single-player mode.

Havenâ€™t played it for yourself? It can usually be found for around Â£2-Â£3 these days, and it’s well worth a purchase just for the extras – thereâ€™s a timeline video showing the game in various states of development, plus trailers from iterations that were cancelled. The credit roll raises a grin too. After scrolling for what seems an eternity, Gearbox basically put their hands up and say â€œItâ€™s impossible to name everybody who worked on DNF – big shout out to all the people who didâ€.

Here we have Gearboxâ€™s very own Duke Nukem Forever. After several delays and five years in development, the world was presented with something that looked incredibly different to the glitzy pre-release screenshots and even E3 gameplay footage from a year prior. Blurry textures, shoddy animation, lifeless explosions and poor lighting effects – Aliens: Colonial Marines was released in 2013 but was firmly stuck in 2008. This lead to a lawsuit against SEGA on the grounds of false advertising.

There are a few conspiracies regarding development, most of which entail Colonial Marines being placed on the backburner while Gearbox focused on Borderlands – their own IP. The rumour that holds the most water is that Gearbox simply took SEGAâ€™s money and then paid TimeGate Studios (developers of the F.E.A.R expansion packs and first-person flop Section 8) to create the single-player mode without SEGA knowing. TimeGate then went bust, forcing Gearbox to pick up the pieces and carry on their work. This is why the â€œfinishedâ€ version was more than a slight mess – the sight of AI teammates magically teleporting to the playerâ€™s location if they fell too far behind frankly ruined all chances of creating a tense atmosphere.

Weâ€™ve seen numerous sealed copies of Aliens: Colonial Marines in charity shops and at car boot sales over the past couple of years. It has become so notoriously rubbish that people canâ€™t even muster up the enthusiasm to remove it from the cellophane.

Over the space of three years Malice went from being a Microsoft published Xbox-exclusive to a budget-priced release that hit PlayStation 2 first. Ironically for a game starring a hero with a huge hammer, it was the final nail in Argonautâ€™s coffin – the UK studio had been struggling for quite some time.

Malice was revealed alongside the Xbox itself in 2001 – a brief demo showed the punkish teen running around some impressively detailed environments, walloping enemies with her morphing, mechanical, hammer. The demo ended with Malice standing in front of a huge robot that mimicked her movements.

After several delays and a change in publisher (incidentally, Vivendi was linked to the game for a short period), Malice quietly limped out the door as a Â£19.99 release. Evolve published it in Europe while Mad Duck – who also published Argonautâ€™s Powerdrome – handled it in the US. Gamers found that finished release had little in common with the 2001 demo. Visuals were notably poorer and although the giant robot was still present, it was now nothing more than a motionless statue. Vocal work from Gwen Stefani and music by No Doubt was also supposed to feature but dropped after Microsoft seemingly lost interest in the title. Reviews were middling at best, with many critics claiming that it was far too short and easy. Some were even surprised to find that it did actually exist – for most of its development it was shrouded in mystery, with some believing that it was nothing more than vapourware.

Fanatical about all things retro, we were determined to squeeze something undecidedly â€˜old skoolâ€™ into this feature. Superman 64 was a close contender, but Carmageddon 64 – also from Titus – pipped it to the post. Superman 64 has been mocked and ridiculed countless times in the past and, both patience and willpower permitting, it can be finished. The same canâ€™t be said for the absolute wreck that is Carmageddon 64.

Pre-release screenshots featuring brightly coloured ‘placeholder’ textures and graphic gave an early heads-up that development wasnâ€™t progressing smoothly. Why show off the game in this unflattering, and possibly misleading, state? We actually have no answer for this. 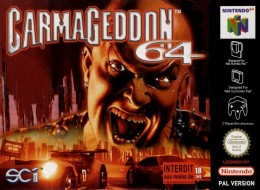 The gaming magazines of the era received their review copies just a day before its release. Suffice to say, Titus knew full well that they were about to drop another digital disaster onto the unassuming public. Itâ€™s easy to dismiss Carmageddon as tasteless tat, riding on the wave of controversy that the likes of Doom, Night Trap and Mortal Kombat created, but it does have a degree of originality about it. To wit: races could be completed in the regular fashion, by destroying all opposition by ramming them into walls and such, or – and depending on which version you played – by running over a certain amount of pedestrians/zombies.

In this N64 iteration though all three ways of winning were nigh impossible due to wayward controls and the most inept AI weâ€™ve ever seen. The opposition was seemingly programmed to follow a pre-determined path around the track. Crash into them – which, you know, is the whole point of the game – and they could then be found stuck behind lampposts and buildings, endlessly accelerating until the race finished. They simply lacked the intelligence to get back on track and carry on with the race.

Amazingly, it got worse – some AI vehicles didnâ€™t have enough power under the hood to get up steep ramps, so youâ€™d routinely find them gathered at the foot of a hill after rolling back down it. It was enough to make Superman 64 look competent.

This wasnâ€™t because the raunchy adolescent adventure didnâ€™t fit into their portfolio – it was allegedly because they were only interested in Vivendiâ€™s licenses that could be churned out annually, such as Crash Banicoot and Spyro. We can only assume Activisionâ€™s board members were unaware that this was the 11th game in the Leisure Suit Larry series.

Codemasters stepped in to pick up publishing duties, with fellow British studio Team17 at the helm of development. Spend just a few minutes with Box Office Bust and itâ€™s painfully clear that Codemasters had acquired something far from finished. In fact, we recall reading an interview in gamesTM suggesting the voice-over work was the only thing in a finished state when Team17 took over – over a dozen renown celebrities provided vocal talent including Josh Keaton, Jeffrey Tambor, Jay Mohr, Shannon Elizabeth, Carmen Electra and Dave Attell. Itâ€™s no surprise, then, that the voice acting is by far Box Office Bustâ€™s best feature.

Horrible controls, unfinished animation, maddening wall jumping mechanics, background music that only played on short loops, ugly character models…we could carry on for a long time yet. Worst of all, Codemasters knew full well that it was a stinker – it was released under the publisherâ€™s â€˜Funstaâ€™ label, which was seemingly set-up to release Box Office Bust in an anonymous fashion.

Easily one of the worst games of the last generation, if not the worse, Ride to Hell: Retribution is another with a rocky development history behind it. From what we can abstain though, this wasnâ€™t passed from one studio to another – it remained at Eutechnyx during its elongated five year development period.

It was first announced in 2008 as an open-world affair, with the first trailer reporting a 2009 release. The proposed release date came and went, and with all traces of the game removed from both Eutechnyx and Deep Silver websites many believed it had been sent to the scrap pile. What happened in the years to follow was a bit of a mystery, but we assume that it was put on hiatus while the studio focused on creating Activisionâ€™s NASCAR games.

Skip forward to 2013 and Deep Silver had seemingly regained faith in the Ride to Hell brand, announcing two new games â€“ XBLA & PSN download Route 666 and a beat â€™em up for mobiles â€“ alongside the resurrection of Retribution. Perhaps it was thought by somebody, somewhere, that they ought to try and scrape back the money invested in 2008. A small sum must have been paid out at some point as the cut-scenes were directed at Universal Studios while the story â€“ involving 1960â€™s biker gangs â€“ was penned by movie maker Tom Smetham.

If Retribution simply felt dated in the way that Duke Nukem Forever and Aliens: Colonial Marines did upon release, we could have begrudgingly lived with that. But not only did it look and feel like a relic from five years ago, it was also blatantly unfinished. Itâ€™s not hard to get the impression Eutechnyx were instructed to carry out the bare minimum to get it through the Sony and Microsoft QA processes and nothing more. Most of the open-world features were dropped, nay forcibly cut, leaving just a hollow husk of what was once promised. Rather than start anew some locations from the original open-world iteration remained, only now they were fenced off with invisible walls. The racing sections meanwhile suffered from poor physics and hilariously woeful collision detection, while the bar brawls resembled one of the early 3D Mortal Kombat games with huge spurts of blood gushing all over the place. On top of all this, Retribution portrayed women in the worst possible fashion – every female the protagonist saved jumped into bed with the game’s â€œheroâ€, leading to some embarrassingly distasteful cut-scenes.

We joked upon release that Deep Silver did the honest thing and put one of the review scores on the gameâ€™s box. Two years on, weâ€™re still unsure what that 1% reference refers to.