Reviewing BigBenâ€™s multi-format racer Motorcycle Club would make us appear even tardier than usual (it was released in March) and having spent just a couple of hours with it, it can hardly be considered for one of our â€˜Most Playedâ€™ features. Yet, I feel inclined to write something about it as itâ€™s the most schizophrenic piece of software Iâ€™ve encountered in quite some time. 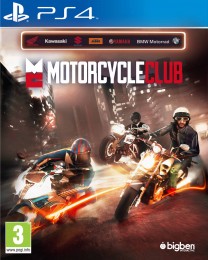 If youâ€™re as old as we are, youâ€™ll no doubt remember the cassette format era – a time where a gameâ€™s box art would often have little in common with the game itself. Motorcycle Club is packaged in a similarly misleading way – the front cover features a dark and moody colour scheme, mostly comprised of red and brown tones. Attention is drawn to biker on a â€˜fatboyâ€™ Harley Davidson style motorbike. So weâ€™re in for a gritty racer featuring Hellâ€™s Angels style motorbike clubs, right? The main menu screen would certainly suggest so – itâ€™s based around a rickety American tavern with bare brick walls and grubby wooden interior. There’s even a tattooed, bandana wearing, biker propped up against the bar.

After picking a race to partake youâ€™re then presented with an extremely bright and colourful racer, in which electric pink and bright blue hues frequently occupy the screen. Indeed, itâ€™s not a dissimilar colour scheme to whatâ€™s used on these hallowed pages. The sun beats down on the tarmac while glowing sparks fly across the screen every time racers collide. We can only assume that BigBen took one look at Milestoneâ€™s Ride – another two-wheeled racer released around the same time – and thought that theyâ€™d better distance themselves from it. Either that or there was a serious conflict within the art team in regards to direction.

Itâ€™s a very arcade-like experience, thereâ€™s no debating that. Handling is far from realistic, which in turn makes for a very forgiving experience – collide into an obstacle and in most instances youâ€™ll simply bounce straight back off it. When routinely presented with such ludicrous sights, itâ€™s very hard to take the game seriously. 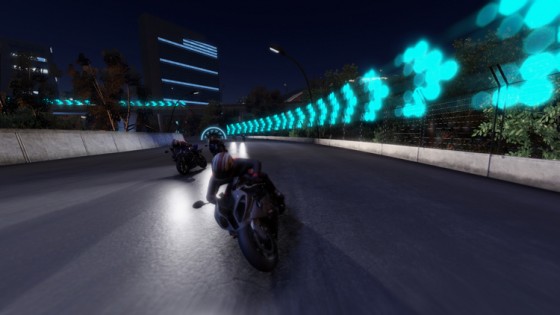 Even a wild stab at inducing a hint of originality has backfired. Rather than sticking with a single motorbike, a total of three – a roadster, custom and superbike – must be chosen before each race. They can then be swapped between via the shoulder buttons, with each track featuring several sections suited to particular model. The roadster is ideal for traversing rough and broken tarmac while the superbike can whizz down straights like no other bike can. The custom bike meanwhile is intended for bendy paths and winding roads; accidentally use a superbike for such and itâ€™ll end up ricocheting from one side of the road to the other. The ability to instantly swap bikes makes an unrealistic game even more so – thereâ€™s no short cut-scene or nifty transformation animation. They simply change in the blink of an eye, in an almost comical fashion. This isnâ€™t a game with a handful of easily fixable faults under the hood – itâ€™s a total mishmash of ideas, none of which really work.

At the time of typing Motorcycle Club can be found for a mere Â£5 in GAME, even on PlayStation 4. Unless you desperately want to add a few easy bronze trophies to your collection, we dare say it isnâ€™t even worth that. If this was an arcade game youâ€™d probably put a quid or two in before walking off mildly discontented.