In Unicube’s survival sim you wonâ€™t be fighting off zombies, giant mutated creatures and other nasties but rather hunger, dehydration and radiation poisoning. Itâ€™s Activisionâ€™s oft-forgotten retro classic Little Computer People gone post-apocalyptic, pretty much, putting the fate of a nuclear family (pun intended) in your hands.

Families – formed of two adults and two kids – can be customised at will and youâ€™re also given the choice of a pet cat or dog. While escaping the blast of a nuclear bomb the family is fortunate enough to stumble on an abandoned fallout shelter. Although in desperate need of repair, it contains all the essentials for survival – food, water and power. These are in limited supply however, forcing you to make a vital decision as to which family member(s) to send out into the wild to scavenge. As time passes the survivors have to travel further afield, consuming additional resources in the process and furthering the risk of radiation poisoning. 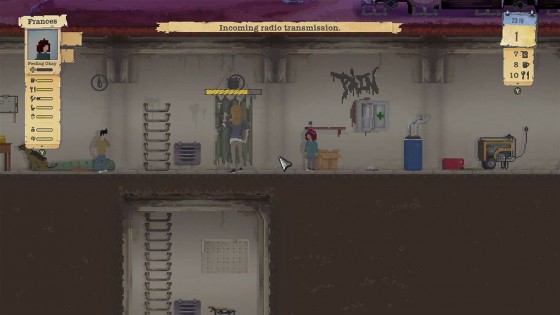 Death is inevitable – the idea is to last as long as you can, gaining knowledge and survival tips through failure so that the next family youâ€™re entrusted with wonâ€™t perish quite as quickly. Indeed, you soon learn by mistakes in Sheltered – within the hour we spent with the Xbox One version (available now as an Xbox Game Preview release for Â£9.99 and via Steam Early Access) we quickly discovered that a bed, toilet and shower should be crafted as soon as possible. Each member has mental and physical well-being means to keep a beady eye on, and moral quickly worsens without somewhere to sleep and wash.

A death in the family is the most traumatising blow of all, impacting all members. If things are really desperate the fallen can be turned into foodstuff – those handed this incredibly grim task are understandably left mentally scarred.

Relatively speaking, water is the most bountiful of resources – every time it rains the water butt fills up, and additional butts can be constructed quickly. Food, medicine and petrol – used to power the generator – are trickier to find, and there will be occasions when these run out. Thankfully visits from other survivors are frequent, bringing with them a small assortment of items to trade. Crafting items are easy to come by too. Building space, however, isnâ€™t – in its default state the shelter can house little more than the basics. Extra rooms require concrete to create, which is something we never came across in our savaging runs. It would appear wise to expand as soon as possible to squeeze in an extra bed or two – the family has to take turns sleeping otherwise, rendering them ineffectual until they get some shut-eye. 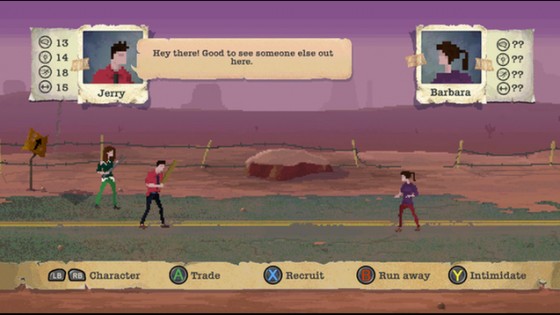 Like The Sims before it, Sheltered isnâ€™t going to appeal to all and sundry – itâ€™s slow paced and relies heavily on repetition, demanding that all four family members are kept healthy and content. Combat – of the turn-based variety – doesnâ€™t come into play until much later on either, although this does give plenty of time to master the basics beforehand. The ability to fix up an old campervan to explore the wasteland more efficiently also gives something to focus on once the fundamentals have been mastered, which we can safely say will take several â€˜trialâ€™ runs prior.

Sheltered is being created by a very small team – it’s the work of just three people, according to the Steam listing – and since being fully funded on Kickstarter, Team17 has taken it under their wing and relocated the team in-house. The time in Early Access will reportedly allow for balancing, while player feedback is already being taken onboard – the full release will include obituaries, due to complaints that itâ€™s not always clear why family members have died. Considering Sheltered was released just five days ago (at the time of typing), the fact that the developers are quick to respond to feedback and promise changes is highly encouraging.