With Rare Replay just days away we’ve busted out the Mr. Sheen and dusted off our Grabbed by the Ghoulies lookback from Halloween 2013.

Microsoft paid a vast sum for Rare ($375 million, if your memory needs a jog) and so it was understandable, at least from a business point of view, that they wanted a return on that outlay sooner rather than later. With Kameo: Elements of Power and the next Perfect Dark still some way off, Grabbed by the Ghoulies was called upon to begin filling Microsoftâ€™s coffins, sorry, coffers, with cash. 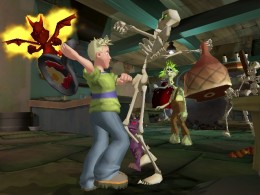 Rare’s first Xbox-exclusive was both announced and released within a six month period. For a Rare production this was uncommon – their games were objects of affection long before release, with new info and batches of screenshots slowly drip-fed to the press in order to whip up a frenzy every time something new was shown.

Even from an early stage it was clear that Grabbed by the Ghoulies wasnâ€™t going to be quite the labour of love as Rare’s previous efforts. Spiky haired protagonist Cooper could have only been more uncharismatic had Rare stuck a backwards baseball cap on his head, while his love interest – punkish teen Amber – was also rather undistinguished when compared to the company’s other creations. Together they were up against the eccentric Baron Von Ghoul, owner of Ghoulhaven Hall.

comparisons with Luigiâ€™s Mansion were easy to make

With each cob-webbed covered room presenting a challenge or obstacle to overcome, comparisons with Luigiâ€™s Mansion were easy to make. The plot too shared some similarities – Luigi and Cooper both had to venture into haunted houses to save the ones they loved (albeit brotherly love in Luigi’s case). Another difference was the hindrances Cooper faced could mostly be overcome with brawn rather than brain due to a focus on combat.

This wasnâ€™t the first game to feature melee attacks mapped out onto an analogue stick, but it was perhaps the most successful at doing so. Pushing the right stick caused Cooper to unleash a barrage of kicks in that direction, as well as a nifty elbow slam when attacking enemies from behind. Environments were fully destructible – after a ruckus the mansion’s rooms lay strewn with pieces of broken furniture along with the ghostly remains of whatever supernatural enemies Cooper had come up against. 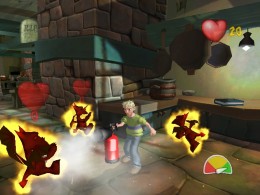 Weapons too were breakable, but not in a pleasing fashion – most would fall to pieces after a paltry three uses. This did however keep players on their toes, forcing them to search rooms for other ways to maim. Not all enemies could be defeated by melee combat either – mummies, for instance, had to be booted into fireplaces and furnaces with a well-timed kick.

Each room had a challenge to beat in order to unlock the door to the next area. These started out relatively simple, such as having to vanquish all enemies within a time limit, and became more elaborate as the story unfolded. Challenges to defeat a bunch of enemies with only a certain number of attacks, or without weapons, would usually take a couple of attempts to successfully compete. Failure to meet these objectives resulted in the Grim Reaper turning up and killing Cooper with one touch from his long pointy finger. The Reaper would also kill any enemies that crossed his path, prompting him to play his scythe like an electric guitar in an amusing manner. 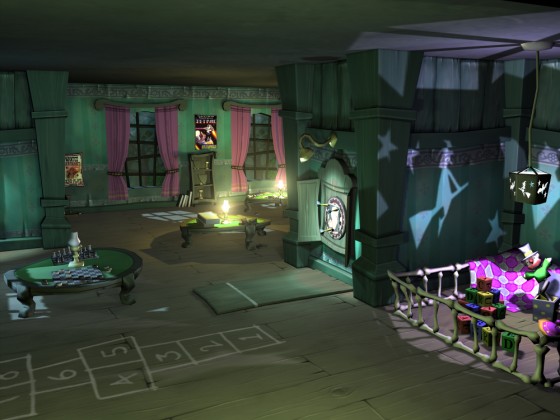 Similar amusing touches frequent, including some subtle nods to Rareâ€™s previous works. Posters for their 8-bit games adorned Ghoulhaven’s walls, while boxes of â€˜Mr. Pantsâ€™ Chocolate Treatsâ€™ could be found in the pantry. There was some typically British innuendo on offer too – when meeting grounds-keeper Mr. Fiddlestick for the first time he apologised for “playing with his tackle”, while later revealing that he had a nephew called Little Willy. The mansion’s maid also makes a sultry comment about finding a sticky residue on the mansionâ€™s floors. 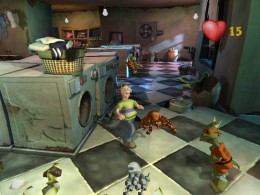 Incidentally, Baron Von Ghoul’s staff were curiously keen to help Cooper out by offering temporary use of various projectile-firing pistols. Presumably they were being kept in the house against their will.

The first two chapters of the story saw Cooper trying to locate Amber, while the third – set on the top floor of the mansion – entailed the two trying to find parts of a torn document that would help them put an end to Baron Von Ghoulâ€™s evil ways for good. Chapter four was set solely in the Baron’s quarters, while chapter five saw Cooper making an against-the-clock dash around the mansion in order to free the other children locked away in the Baron’s abode. Sinister. The amount of time allotted was more than enough, yet it wasn’t unusual to feel a sense of panic when first handed the task.

Towards the last few chapters the challenges started to feel sloppily designed, placing players in predicaments that required luck rather than skill. The manual camera controls – placed on the left trigger – become quite annoying by this time too, although to be fair itâ€™s hard to see how else Rare could have implemented a camera with the right-stick already allocated to melee attacks. Even before the final chapter though the game had some other notable faults. Control was taken away from the player far too often – upon entering a new room a cut-scene showed what to do or where to go next – while first-person corridor sequences also took manual control away while ushering Cooper from one part of the mansion to another. 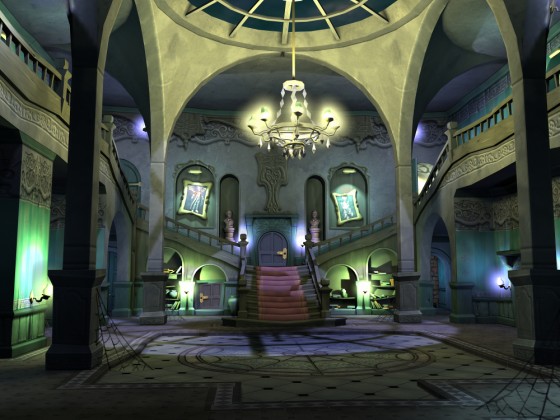 Rumour has it that Cooper’s adventure was originally intended for the GameCube, and so you canâ€™t help but think what it could have been with input from Nintendo themselves and a longer development period. We imagine Nintendo would have suggested getting rid of the anti-power ups that reduce health bars and reverse controls temporarily. Accidentally stumbling into one of these was maddening when at deathâ€™s door. The health system didnâ€™t feel that well thought out either – Cooper spent most of the adventure with next to no health due to Baron Von Ghoul constantly altering the maximum amount. 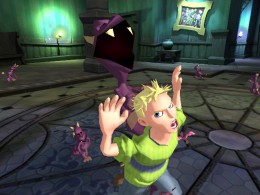 At least the stylised visuals have prevented it from looking quite as dated as some Xbox games do nowadays – a few of the special effects still look the part such as the mansionâ€™s shiny reflective floors. Music too was up to Rareâ€™s then usual standard, comprising of some sombre haunting melodies and Banjo-Kazooie-esque piano riffs.

Grabbed by the Ghoulies deserves to be remembered for reasons numerous. Alas, not all are positive. This was Rare under working pressure to make something – anything – quickly and get it out of the door. Even so it remains an amusing, if not particularly engrossing, adventure. The name alone also confirmed Rare had Microsoft’s blessing to continue filling their games with a distinctly British sense of humour.

Indeed, it does amuse us slightly that the whole â€˜Grabbed by the Ghouliesâ€™ pun probably went over the majority of American gamerâ€™s heads.