Published by SEGA and developed by Game Freak – yes, the same Game Freak who gave the world PokÃ©mon – Tembo the Badass Elephant recalls fond memories of the 32-bit era. Specifically, around two or three years into the Saturnâ€™s stunted lifecycle. While Sony was wowing gamers with the kind of stuff that showed off the PSoneâ€™s 3D abilities, SEGA was busy releasing such offbeat 2D titles as Three Dirty Dwarfs, Mr. Bones, Scud – The Disposable Assassin, Saturn Bomberman and the legendary Guardian Heroes in a pleasantly oblivious manner.

Not only does Tembo himself – an elephant dressed in commando attire – resemble a hero from days gone by, but the difficulty level rivals something from a past era too. Weâ€™re talking back when 2D platformers were tough to the point of being brutal, requiring enemy attack patterns to be memorised and level layouts learnt inside out. 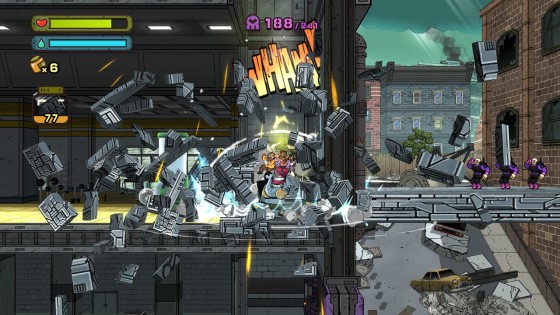 Despite their length and non-linearity, the majority of stages feature just three or four checkpoints each. To make things tougher still, Tembo can only withstand four hits before hitting the dirt…and due to scarcity you can bet that when low on health no pick-ups will be nearby. There are even a few instances when itâ€™s wise to leap over and then return to health pick-ups when at death’s door. Combine all of this with the fact that Game Freak have brought back the somewhat dated concept of lives – five of which being the default amount – and youâ€™re left with something that could only be more â€˜old skoolâ€™ if it feature a password system.

Even the cut-scenes shun new-fangled visuals, favoring delightfully drawn static images to summarize the plot. An enemy force known as Phantom are attacking the bizarrely titled Shell City with tanks, helicopters, mech units and more. The city has subsequently been left ablaze, and so Tembo is summoned from his jungle homestead to crush tanks, quench flames and save citizens. Heâ€™s the ideal man for the job. Well, elephant. You can read more into that statement if you so desire – it genuinely feels as if Tembo, the character, came first and then Game Freak designed a game around his numerous talents. As such, thereâ€™s a air of consistency present that some similar games lack. 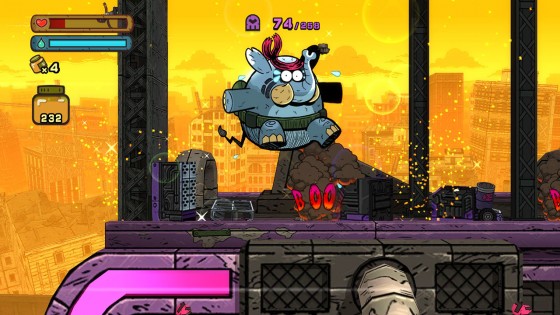 Given Game Freakâ€™s pedigree it’s no surprise that the level layouts are very Nintendo-like in design, full of hidden areas and the occasional visual joke in the background. Indeed, it has much in common with the studioâ€™s own Drill Dozer – one of the GBAâ€™s hidden gems. There are elements from the 16-bit Sonic games present as well, including a whole set of stages baring resemblance to Sonic 2â€™s Carnival Night Zone. A mission set astride a moving train provides another highlight.

the level layouts are very Nintendo-like in design

Controls are tricky to master initially but allow for a degree of experimentation once licked – Tembo can slide under incoming missiles in order to attack tanks unharmed and can also bounce off the ground after an aerial attack in hope of hitting additional targets. The first few levels are designed around speed and demolition but soon become more combat focused, incorporating arenas in which all enemies have to be destroyed to progress. One of the final stages is in fact nothing but a constant barrage of Phantomâ€™s toughest troops. By this point the weaknesses of each enemy type will be beyond familiar, but even so this level does frustrate due to a â€˜bullet hellâ€™ nature. A small target Tembo isnâ€™t. Bosses meanwhile take the form of huge mechanical beasts and have some good old fashioned attack patterns and bullet formations to learn.

With just four worlds to conquer the amount of levels on offer may be relatively few. Fortunately each has been designed to be replayed several times over. The challenging difficulty level also makes it likely that very few will be completed on the first attempt, so be prepared to be thrown back to the map screen numerous times. There are more than a few frustrating moments – one stage has mechanical crushers that kill with one hit – but the fact that we always dusted ourselves off and leapt back into battle speaks volumes. 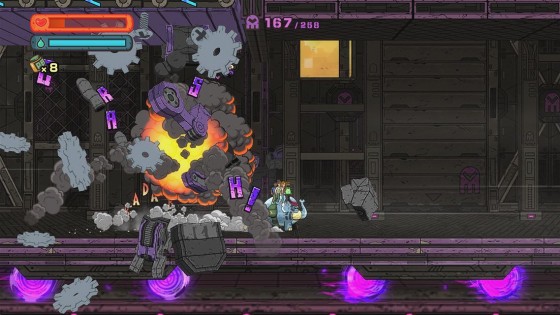 Thereâ€™s a rare satisfaction to be had by destroying all enemy units and rescuing all ten caged citizens in a stage. Progress trackers for both are located at the top of the screen and because of the non-linear level design itâ€™s not uncommon to miss a citizen or two until well acquainted with a stageâ€™s layout. Theyâ€™re often hidden away behind solid walls or on top of structures – all too often we smashed through a house or similar only to find that it was required to reach a higher part of the level. This did often irritate, but deep down we knew we only had ourselves to blame. Thereâ€™s fun to be had by smashing into obstacles, leaving nothing but scrap and rubble in Temboâ€™s wake. So much so that we wished wanton destruction played a slightly bigger part.

Like many of those oddball 2D titles SEGA released years ago, Tembo the Badass Elephant does have a rather experimental feel to it. The chance to extend Temboâ€™s health bar via an upgrade system would have done the game wonders, adding some much needed character development while smoothing out the unwelcome difficulty spikes in the process. Nevertheless, thereâ€™s much to admire here. There’s even solace to be found within its challenging nature – an estimated 10-12 hour playtime to see everything and save everyone is nothing to sniff at.

See, there’s still a bit of 16-bit spirit left at SEGA after all.