For what looks at first glance like a simple word game with cute bears, Alphabear is surprisingly complex. 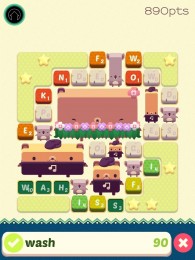 They had me at cute bears though, especially as they’re reminiscent of the chaps from Triple Town – which is because the game is from the same chaps, Spry Fox. And it’s a free download, so what’s to lose? A check of the IAPs is encouraging too, as unlimited honey – used up each time you play a game – is available for four quid, give or take. It turns out it’s not that simple.

But game before commerce. The aim is to make words from the letters available on the board, which clears space for your bears to grow bigger – and bigger bears mean bigger points at the end of the game. The first complication is that letters expire after a number of turns – and on doing so turn to immovable stone, inhibiting bear growth – so you need to prioritise.

Initially this is ample fun. Hit point targets, and you hatch a new bear – which I’m pretty sure is biologically sound. The bear says a couple of sentences of nonsense using words from the preceding game, and a social networking phenomenon is born. Sort of.

Those bears are the next complication, and are equipped before each game. Some give you extra points for playing a certain type of word; some earn you a percentage bonus on your final score; some mess with the letter distribution – more ‘G’s for example. The letter distribution – which also varies in some of the challenges – can make a material difference to the difficulty, so needs real consideration. Which is a nice complication. 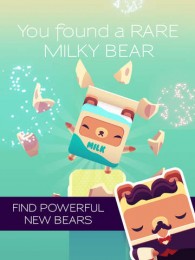 After a couple of chapters, the game starts to get tricky: the point targets increase by an order of magnitude, and the boards get tougher. At this point the stone letters start to play a serious part, as they’re all but unavoidable, so it’s about restricting them to the least bad positions – basically the edge of the board.

This is also when the freeness starts to bite, as the more powerful bears need rest after use, and only with them can you hit the targets you need to – and waking them up means coughing up coins, the other game’s other currency. So the unlimited honey IAP isn’t much use: although you can keep playing, you’re never going to get the scores you need. It feels a bit rough that there’s a paywall to be hit even after you’ve paid up.

Still, with challenges changing daily, it’s rather well suited to a couple of games a day – without spending a penny. That’s no bad thing, but it’s not quite the all-consuming obsession it might have been.