SEGA is on something of an unexpected roll at the moment – digital release Tembo the Badass Elephant launches on the download services tomorrow and has arrived to decent reviews while legendary brawler Streets of Rage 2 hits 3DS on Thursday. 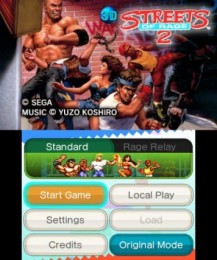 Unless SEGA has somehow managed to mess this 3D revamp up (which is unlikely – their 3D revivals of 16-bit classics have been excellent so far) itâ€™ll be Â£4.49 well spent. This is especially the case for those havenâ€™t sampled Streets of Rageâ€™s delights before – this sequel is often regarded as being one of the greatest scrolling brawlers of all-time.

Having played it recently, we can vouch that the soundtrack remains exceptional too.

While we’re on the subject we may as well rattle off the other incoming 3DS arrivals. Thereâ€™s the apparently very good (8/10 on Nintendo Life) and cheap as chips Ninja Battle Heroes (Â£1.79), isometric tactical RPG Mercenaries Saga 2 (Â£3.99 – a few screenshots here) and I Love My Cats (Â£19.99), a virtual pet thing in which itâ€™s possible to take your prized puss to the beach. Thatâ€™s the last place a cat would ever want to visit, Battersea Dog’s Home aside.

Yoshi Touch & Go (Â£6.29) is this weekâ€™s sole Wii U Virtual Console release. An early Nintendo DS outing, we recall it being a bit underwhelming. Stick with Yoshiâ€™s Woolly World or perhaps consider Canvaleon (Â£10.80 until 6th Aug, Â£12.59 thereafter) – a 2D stealth platformer starring a pleasingly gormlessly looking chameleon. Then thereâ€™s Blocky Bot (Â£1.89), a “mini platformer” which boasts of the first ever playable box of French fries. Presumably developers Mobot Studios – of Paper Monsters Recut fame – have forgotten about Midwayâ€™s Aqua Teen Hunger Force tie-in. Nintendo Life reckons this one is worth a look too, comparing it to Splatoonâ€™s Squid Jump.

A trio of discounts finish the week off, all of which are for 3DS. Conception II: Children of the Seven Stars drops to Â£13.49 (regular price Â£24.99) while Zombie Panic in Wonderland DX is down from Â£6.30 to Â£4.49. Those who have downloaded the Monster Hunter 4 Ultimate Special Demo Version meanwhile can bag the full game for Â£24.99 until 30th June. You might want to hold your horses on that deal however – a physical copy can be had for under Â£20 on Amazon currently.