Just like fellow PlayStation exclusive Hohokum, Entwined pushes the definition of the word â€˜gameâ€™ somewhat – a form of competitive activity or sport played according to rules. The only penalty for failure in Entwined is that it takes longer to reach the level’s end. Try, try again and eventually you’ll get there. Itâ€™s a testament to Entwinedâ€™s design, then, that the later levels take far longer to conclude than the opening few.

Developed by industry graduates and released during E3 2014, Entwined is an artistic endeavour in which two souls – that of a lovestruck fish and bird – gracefully soar through a narrow tunnel, navigating through coloured markers while collecting glowing trinkets.

One analogue stick controls the fish; the other the bird. Meet the two in the middle of the screen and they entwine. Collect enough trinkets (for want of a better word) and fly through numerous markers without breaking a chain and the two souls will eventually elope, morphing in a majestic dragon. 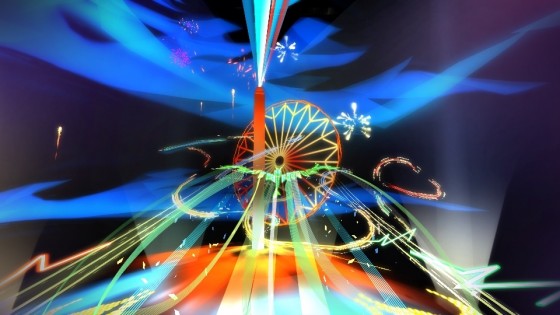 The end stages are free-roaming affairs in which the aim is to collect several glowing orbs. Again, there is no penalty. There is a reward though – for a few precious seconds the dragon leaves behind a permanent glowing trail. The camera zooms out to show off your handiwork, and then itâ€™s off to the next stage. Nine feature in total, mostly based around nature.

To see and play through them all takes considerably less than an entire afternoon or evening. Coupled with a lack of penalty and punishment for error, itâ€™s the perfect game to unwind with. Those looking for a challenge arenâ€™t completely ignored either – a â€˜three strikes and youâ€™re outâ€™ mode helps to round the package off nicely, evoking memories of Rez and Child of Eden.

Had we reviewed Entwined at launch we may have felt a little shortchanged after stumping up Sonyâ€™s Â£6.49 asking price, but under its current status of a PS Plus freebie, it’s now a recommended download for those after a couple of hours of gaming minus the usual hardship.