Even racers from as far back as the 32-bit era were known to feature car/soccer hybrid mini-games tucked away somewhere on the game disc. Weâ€™re pretty sure that one of the Psygnosis PSone racers had one, and weâ€™re even more confident in saying that Monster Truck Madness and Test Drive: Eve of Destruction did as we vaguely remember playing them.

As fun as they were, there was no escaping the fact that they were just mere mini-games. Rocket League – a sequel to 2008â€™s Supersonic Acrobatic Rocket-Powered Battle-Cars – takes this simple concept and expands upon it greatly, resulting in something that feels surprisingly substantial.

There are lots of things Rocket League excels at but arguably itâ€™s the handling of the cars that impresses the most. The sleek and stylish vehicles are a delight to control, getting up to full pelt in a jiffy and power sliding across the pitch with considerable ease. Gather up rocket booster fuel – found at certain locations within the various arenas – and they go faster still, allowing players to get from one side of the pitch to the other in a matter of seconds. Usually just in the nick of time to fend off a goal attempt. 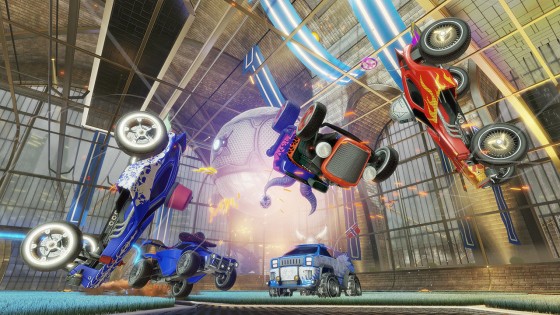 Vehicles can perform acrobatic maneuvers too, including flips in all four directions. Not only can a well-timed flip clear a ball from the goal area, but it can also be used to â€˜bicycle kickâ€™ the ball into the oppositionâ€™s goal. This leads to some brilliant, grin inducing, replays – the kind youâ€™ll want to show off to those on your friendâ€™s list. Which, of course, is entirely possible.

Another thing that gives matches a fluid, often chaotic, feel is that itâ€™s possible to drive up and along the ramped walls of the arena. This removes all chances of ever stopping dead by colliding with walls and such, keeping the pace of a match breakneck throughout. With this in mind, it may come as a surprise to find that the final scores are generally similar to what youâ€™d find in a regular football match. Well, similar to FIFA Soccer scores at least – weâ€™re yet to see a match end in double figures, although one or two have been close.

There are no penalties or such either – the only interruptions are the goal celebration replays which can be vetoed to skip. Even time searching for online matches (a customisable playlist of 1v1, 2v2, 3v3 and 4v4 matches is available) is kept to a minimum with matchmaking taking place behind the scenes and AI filling the gaps if no human players are present. 2v2 matches push and encourage unrivalled teamwork while 4v4 matches are pleasingly frantic. 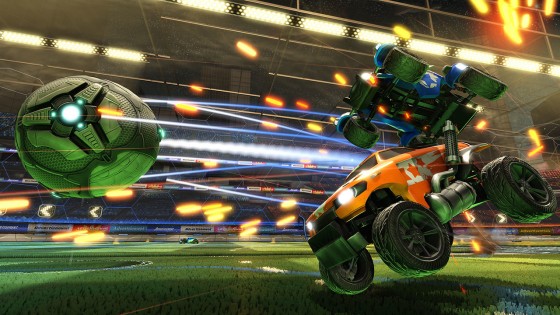 Just like FIFA and PES, tactics play a huge part. Thereâ€™s no allotted goalkeeper and so it falls onto an individual to fill that role. Shrewdly, both voice chat and quick chat – via the d-pad – facilities are present to give orders. Very few players seem to use quick chat though. Indeed, Rocket League falls foul of all the usual issues that crop up in online sports games, including sore losers who quit before a match has ended. A lack of commentary aside – which probably would have irritated over time anyway – they’re the only downer that springs to mind.

This is a well designed, refined and polished package. For those wanting to fine-tune skills and explore the numerous nuances available (aerial flips!) there are practice drills available, while those looking for something to sink their teeth into will no doubt enjoy the single player championship mode. The AI isnâ€™t perfect but provides a good challenge. 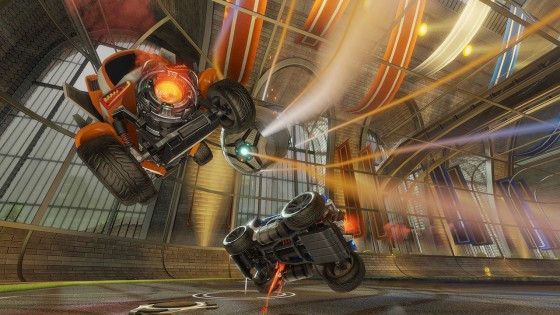 On top of all this, itâ€™s a treat for the eyes – developers Psyonix have gone well beyond the call of duty when it comes to visuals with lots of alluring lighting effects on show and plenty of minute detail present on the vehicles. An XP system holds it all together with unlockable skins, alloy wheels, delightfully daft accessories and more. XP is even handed out if a match is lost and as such thereâ€™s incentive to keep playing even if youâ€™re on a losing streak.

Demanding yet rewarding, Rocket League isnâ€™t just one of the greatest PS Plus giveaways so far – itâ€™s one of the PS4â€™s finest altogether. Trust us on this one.