The Joker is dead. Just in case your memory needs a jog, Rocksteadyâ€™s final entry in the Arkham saga begins with the Joker’s body slowly entering a cremation furnace. An unprovoked twiddle of the analogue stick ignites the fire and as soon as the flames touch his smeared, highly flammable, face paint Batmanâ€™s former nemesis is left burnt to a crisp. Itâ€™s a memorable, if grizzly, intro. Perhaps even grizzly enough to single-handedly allot Arkham Knight its 18+ age rating. Batman doesnâ€™t kill, after all.

This clearly presented Rocksteady with a problem when it came to incorporating Batmanâ€™s latest high-tech toy – a heavily armoured incarnation of the Batmobile. Ploughing into thugs and other hired muscle is possible, but instead of leaving a squishy mess all over Gotham Cityâ€™s pavements theyâ€™re merely sent spinning in an electrocuted state. The Batmobile packs some heavy firepower when in ‘Battle Mode’ too. It, quite literally, is a tank. When opening fire on criminals though the hefty metal shells are automatically replaced with non-lethal knockout rounds. Batman – the considerable crime fighter.

The Batmobile is called into action for a couple of very different reasons. Batman is up against a formidable duo formed of the Scarecrow and the titular Arkham Knight, a mysterious armoured foe who has a small army of skilled soldiers, aerial drones and unmanned tanks at his disposal. He knows Batman’s tactics inside out, and with armored APCs roaming the streets Bats is forced to bring out the big guns to even the odds. The other reason merely design related to prevent over familiarity with Rocksteadyâ€™s previous works. Itâ€™s fair to say even hardened fans would have had trouble stomaching another Batman game where Bats spends more time gliding through the air than fighting crime – something the disconnected Arkham Origins suffered from.

The Batmobile can be used remotely, summonable by the push of the button. As long as the bridges are down in the desired area at least – this is Rocksteady’s method of preventing players getting ahead of themselves. It’s a bit of a tricky beast to control at first, colliding into everything left in the wake of the evacuation forced by Scarecrow’s hand, but soon proves to be more than just a means of getting around – itâ€™s an integral part of the experience, used in puzzle solving, combat and beyond.

Although far from subtle, ‘Battle Mode’ vehicular combat is nuanced and satisfying, with each enemy vehicle type having a weak spot to exploit. Land a direct hit and the unmanned drones explode in a glorious shower of technicolour sparks. When parked nearby a Batmobile takedown can be performed during melee combat, while the winch and electric harness can be used to shift obstacles and power devices. Many of the optional Riddler puzzles in particular involve the Batmobile in some form, including a couple of underground race tracks. In the grand scheme of things, or at least in Riddlerâ€™s scheme, these races are trivial inclusions – thereâ€™s an elaborate side-story to free a captured ally from Enigma’s clutches. 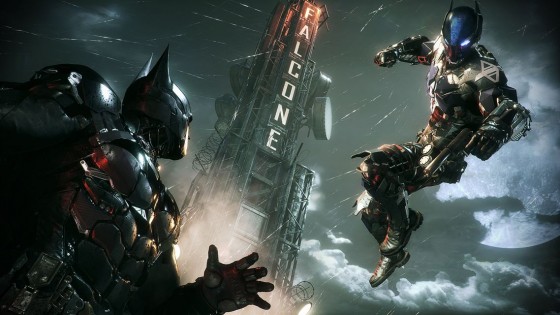 Allies may be few but they have a bigger presence, as does the GCPD. The police department is something of a focal point, with frequent visits to either drop off crooks or pick up new leads. Attention to detail is phenomenal throughout – as the story unfolds the prison cells start to overflow with convicts, while on a slightly unrelated note both the Batmobile and Batmanâ€™s armour becomes worn and damaged over time.

Attention to detail is phenomenal throughout

Speaking of which, a new Batsuit is granted a couple of hours into the storyline. Filled with liquid metal and whatnot, it allows Bats to take down targets in quick succession once a â€˜fearâ€™ meter has been filled. Just like the Batmobile, the new suit is integrated into the plot. Arkham Knightâ€™s guards are skilled soldiers, bringing deployable turrets, remote controlled drones and more into battle. Rely on underground passages too heavy and theyâ€™ll throw a thermal grenade into the vent; hide for too long and theyâ€™ll send a drone airborne to track your whereabouts. The new suit is designed to deal with these threats, catching the Arkham Knight off guard in the process.

The Batmobile, new suit and the Arkham Knight himself are all introduced within the first few hours of play. As such, the opening is remarkably fast-paced – something helped tenfold by the fact the storyline packs more surprises and unexpected moments than before. Indeed, the whole experience is based around the element of surprise – some missions start off in a mundane fashion but end with an unpredicted twist, be it a new plot development, the discovery of an optional side-mission or a run-in with another one of Batmanâ€™s foes. This gives the game a genuinely unexpected addictive streak, and the visual splendor only adds to this. To say it’s a treat for the eyes is an understatement. 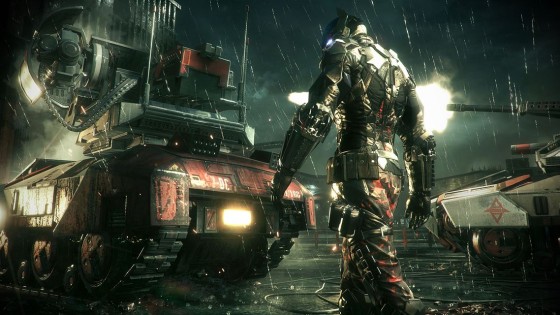 Moreover, Rocksteady knows how to keep the surprises coming. Side-missions are selected and tracked from a menu and new ‘Most Wanted’ missions are frequently added, each of which has a tantalizing conclusion to reach. There is some repetition – defusing bombs via the Batmobile soon grows old – but the majority of side-missions are meaty and substantial, including the chance to put Batmanâ€™s detective skills to the test to track down a serial killer. Bank heists meanwhile have online scoreboard elements, as do the wealth of AR and bonus challenge missions. Aim for 100% completion a good 50 hours of play can easily be rung from it. Considering Gotham City is but a footprint when compared to the size of the game worlds in GTA V and The Witcher 3, it’s an impressive amount.

The main storyline – which itâ€™s fair to say most will be coughing up the Â£50 entry fee for – does however lose some steam towards the end. After a memorable multi-staged boss battle, albeit one that does involve some unwelcome trial and error, being sent out to reboot a office server straight after is a complete anti-climax. Missions such as this feel like mere padding save for expanding a few minor plot details. The ending certainly wonâ€™t be forgotten anytime soon though. In fact, weâ€™re willing to bet that this generation wonâ€™t see a finer superhero sim. That may sound like a bold statement considering how young the current crop of consoles are, but with Arkham Knight coming incredibly close to toppling Arkham Asylum only Rocksteady themselves can prove us wrong. Like the world’s greatest detective himself, Batman: Arkham Knight is in a league of its own.