Yoshi’s Woolly World arrives in Europe this Friday, bringing along a trio of woolly Yoshi amiibo with it. Considering weâ€™re still yet to see a single Splatoon amiibo in the wild it’s sad to say that unless youâ€™ve pre-ordered chances of finding one are slim. 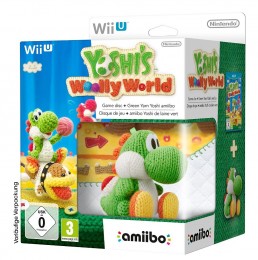 Best dig out your great gran’s knitting needles, then. Or perhaps hope your local game emporium has the game and amiibo pack in stock – thatâ€™s probably your best bet for bagging a fluffy Yoshi.

The US delay strikes us as a little odd. American gamers did receive Kirby and the Rainbow Curse a few months before Europe, so this could be the reason. Nintendo definitely felt need to put space between the Wii Uâ€™s big hitters, whatever the cause may be.

As it happens, Kirby and the Rainbow Curse and Yoshi’s Woolly World appear to be very similar in terms of quality – both are fun and well made, but lacking true innovation. This has lead to some mixed reviews – everything from 9/10 to 6/10.

Does the Â£30 price tag make up for any alleged shortcomings? Hereâ€™s a review round-up:

9/10 – Nintendo Life: “Yoshi’s Woolly World has been a long time coming, but it’s been absolutely worth the wait. It’s accomplished platforming within Yoshi’s quirky and unique template, and has enough soft cuteness to charm young gamers and melt the hearts of the most jaded of veteran gamers”

8.5 – God is a Geek: “If you are the type of person who plays a game just to finish it and see the end credits, then there is a possibility that after six to eight hours of solid play, you will see the end credits, the smile will disappear from your face and you will feel slightly disappointed that it ends so soon. However, for those secret hunters, for those who boast a full roster of PokÃ©mon on their 3DS, a complete collection of Amiibo on the shelf, or for those with young children they want to play games with, then Yoshiâ€™s Woolly World promises to be a real treat”

8.5 – Nintendo World Report: “Yoshi’s Woolly World is the best Yoshi game I have ever played. The controls feel extremely solid and the gameplay quirks just keep coming that makes it a unique experience. With over 50 levels to explore and many secrets to undercover, the game will keep you going for quite a while too”

8/10 – TheSixthAxis: “Despite a few technical problems and design missteps, the variety, and thoughtfulness, of the myriad mechanics make it a pleasure, as you advance through each world exploring every nook and cranny. Once again, the Wii U makes an excellent argument for its existence, especially when itâ€™s giving players time in the company of one of Nintendoâ€™s most beloved characters”

7.4 – IGN: “Yoshi’s Woolly World is a cute and colourful platformer, with plenty of ideas but only a few great levels”

7/10 – The Metro: “In Short: A perfectly competent platformer, perhaps Yoshiâ€™s best since Super Mario World 2, but one that is far less unique than its visuals suggest”

3.5/5 – GamesRadar: “A cute, well-crafted platformer that loses momentum fast, and plays things far too safe to ever be essential”

3/5 – Digital Spy: “There is the odd flourish of creativity, but it is hard not to feel like it’s all been done before, and better. There’s still plenty to enjoy, but it doesn’t quite carve out its own identity. In short: it’s finely crafted, if a bit woolly”

6/10 – VideoGamer: “Excellent occasionally, good in parts and downright dull in others, Yoshi’s Woolly World is a disappointment. On the face of it it’s everything I expected from a Nintendo game: charming, colourful, fun, and technically on point. This, sadly, is only part of the story, with Yoshi’s Wii U adventure unable to come close to Nintendo’s usual brilliance”

6/10 – GameSpot: “The excellent controls only makes Woolly World easier to finish without many issues. In fact, if you have experience playing the likes of Super Mario World or Yoshi’s Island, it’s likely you’ll be able to breeze through the game’s first half on autopilot: Run right, line your jumps along the craniums of Shy Guys and Koopas, eat foes with a whip of Yoshi’s tongue, and reach the exit on the furthermost-right point of the level. No real peril or heroics; just violent tourism”