Would you take orders from a talking chalice? You probably would if the survival of an entire nation depended on the powers within said drinking vessel. It also helps that the titular, all-knowing mouthpiece has quite the personality. Two, actually – male and female, both softly spoken and full of dry wit. The chalice is supposed to represent one of those illusional silhouettes that kept Victorian children amused for hours – the kind that are usually found nowadays in rubbish free-to-enter art-galleries.

The chaliceâ€™s aforementioned power is the ability to cleanse the kingdom of an alien race known as the Cadence. So far, so Mass Effect. The Cadence has been festering on the kingdomâ€™s borders from some time, attacking only when their offspring are fully grown and ready for battle. Because of this, battles are often decades apart. Double Fine has managed to nail the passage of time perfectly here, in the sense that your mere mortal heroes grow older and wiser before eventually kicking the bucket. 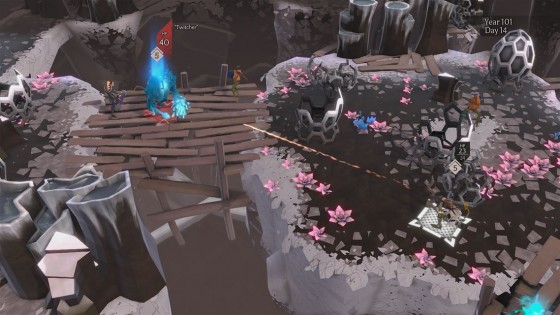 During the gameâ€™s opening – in which youâ€™re introduced to the basics of the turn-based combat system – youâ€™re prompted to place a Keep on the map. Keeps are where your heroes settle down and reproduce, carrying on their bloodline and passing on their traits – both good and bad – to their siblings. Once they reach adulthood they too will step into the boots of their forefathers to become protectors of the kingdom. Thatâ€™s unless you decide theyâ€™d be better suited to becoming a research-boosting scholar or extra XP bestowing combat instructor, anyway.

Such decisions are permanent, and this is where Massive Chalice can be seen as punishing – bad decision making during the first few hours can have an even more negative impact much later on. As a result thereâ€™s a rather steep learning curve and this is something that, potentially at least, could players off after just an hour or two. This is a demanding game, requiring your utmost attention whether youâ€™re in battle or back at the map screen making those all-important decisions. These vary from permitting your finest warrior to take a few years out on a soul searching quest, to allowing your researchers to try out an experimental new weapon. Positive outcomes can feel rewarding; the opposite disheartening. 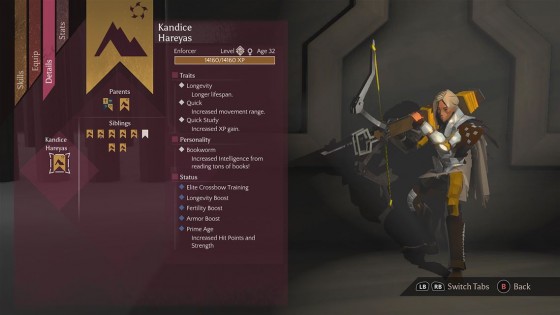 As mentioned previously, combat is turn-based. Think along the lines of Fire Emblem and X-COM and youâ€™ll get a rough idea. In essence, you move your five-strong party one hero at a time, select their attack – with most classes having 3-4 manoeuvres available – and pick a target. During the enemyâ€™s turn all you can do is sit back and hope for the best. Thereâ€™s no means of putting heroes in a defensive stance, and you can forget all about counter attacks. Oddly, thereâ€™s no healer class either and just a single health potion can be taken into battle per hero. Heroes do however level up and can be kitted out with improved weapons and armour once researched.

Although the battle system is functional rather than fancy – something not helped by the drabness of the landscapes – Double Fine has clearly had their thinking caps on when it comes to character classes and enemy types. Alchemists fill the role of grenadiers, able to lob flasks containing explosive chemicals over tall objects, while melee attackers clutch huge metal cabers with both hands. Hunters meanwhile carry a large bow and arrow that can be upgraded to strike multiple targets. Theyâ€™re also able to move silently around the battlefield, exposing enemy locations as they go. Once bloodlines have been expanded new classes are created, including Trickshots – Hunters who use arrows with explosive flasks strapped to the tip. 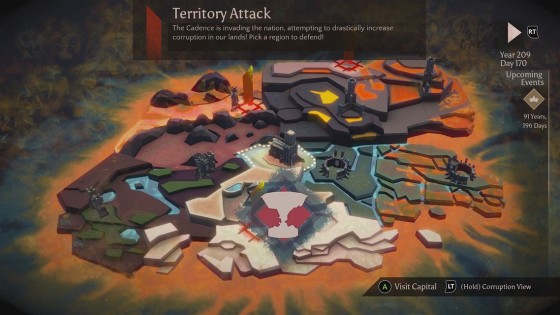 As for enemies, the crab-like Raptures leave puddles of corrosive acid behind while Wrinklers can age heroes with one fell swoop. Then there’s the ghoulish Lupes, who can wipe minds in order to reduce experience levels. The Chalice offers sage advice upon discovery of a new enemy type, but even so youâ€™re often forced to learn attack patterns the hard way. This leads to some trial and error, which in turn brings us back round to the steep learning curve.

One thing youâ€™ll quickly learn is that only a single territory can be defended at a time, and so itâ€™s inevitable that land will eventually become lost, taking all structures with it. Coupled with the soundtrackâ€™s sombre tones, this gives Massive Chalice an unparalleled sense of dread and despair. Thereâ€™s something poignant about sending a bunch of grey-haired 80 year olds out to defend the nation, and all because itâ€™s entirely possible to become attached to your battle-hardened heroes. Especially so if selecting the option for randomly generated nonsensical names. Alas poor Concubine Doodlebats, I knew him well. 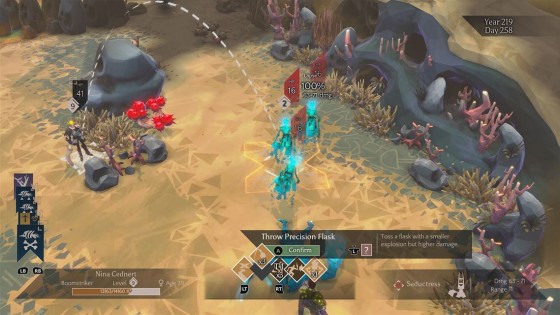 As a whole, Massive Chalice doesnâ€™t quite come together. Combat grows tedious way before the foregone conclusion – the story is based around the fact that the Chalice takes 300 years to draw enough power to wipe out the alien invaders. Providing battles arenâ€™t skipped this brings the average game time to around 10 hours. Those final few hours are tough old slogs, putting us in a mood that even the Chaliceâ€™s dry wit couldnâ€™t elevate. With few turn-based strategy games on current-gen consoles this still stands as a recommendation regardless, but make no mistake – youâ€™ll need both patience and time for this one, and probably a pot of strong coffee too.