If you can drag yourself away from Splatoon youâ€™ll find a few new arrivals of note on the UK eShop this week. 3DS owners meanwhile have Lord of Magna: Maiden Heaven to consider – a new JRPG from the minds behind Harvest Moon and Rune Factory.

Don’t Starve: Giant Edition (Â£12.59) is definitely the week’s biggest release, and having spent a bit of time with the PS4 version we can vouch for the praise it received during its initial launch. Itâ€™s a bleak and slightly twisted 2D survival game in which youâ€™re tasked with battling great odds while out in the wilderness. This means chopping down trees, making bonfires, finding food and fighting off the wildlife. This belated conversion throws in the Reign of Giants expansion pack, which adds new characters, seasons, creatures and challenges. Thatâ€™s not all – during launch period those who purchase a copy will get a bonus gift copy that they can pass onto a friend.

Another making a belated Wii U appearance is FullBlast (Â£4.40 until 2nd July, Â£5.39 thereafter), fresh from the…Ouya. Itâ€™s a vertical shooter that actually doesnâ€™t look too shabby at all. Take a look at the trailer and judge for yourself:

Thereâ€™s just one VC offering due this Thursday, and that’s the undeniable Nintendo DS system seller Big Brain Academy (Â£6.29). Weâ€™d be more excited about its Wii U debut if it wasnâ€™t for the fact that every charity shop in the country is filled with unwanted copies. We over exaggerate, of course, but in all fairness itâ€™s pretty easy to find for a few pounds nowadays. 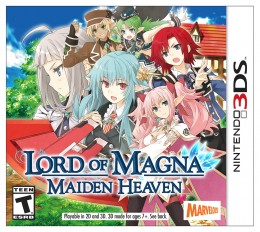 Then on 3DS thereâ€™s the previously mentioned Lord of Magna: Maiden Heaven. Featuring a similar art-direction to Rune Factory, the turn-based battle system is said to take influence from Valkyria Chronicles. It has had a little bit of a rough development history – original developer Neverland faced closure, leaving only key staff to finish the game off – but hopefully this wonâ€™t be noticeable when playing. Itâ€™s not as if it has been stuck in development for years – it was announced in February 2014 and hit the Japanese market during October the same year.

Right, back to Splatoon.