It so transpires when escaping from a heavily guarded enemy fortress itâ€™s essential to carry a piece of metal pipe. In the hands of chisel-jawed war hero B.J. Blazkowicz such a simple object becomes an invaluable tool of many uses, from prying open doors and breaking down broken walls to knocking unaware enemy soldiers off their feet, ready for a swift and silent final blow to the head.

The first part of this standalone prequel entails BJ and his comrade disguising themselves as Nazi soldiers to sneak intel out of a large cliff-based stronghold. Things donâ€™t quite go to plan, however, prompting a daring escape against great odds. Before making a hasty retreat, exploring the Naziâ€™s prison cells, unkempt kennels and other such delightful places provides an unearthly and harrowing experience. 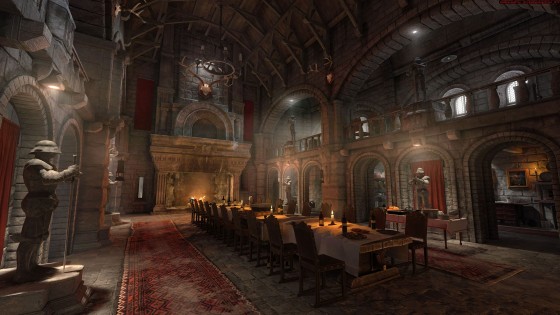 Like before, stealth is optional and handled well – BJ will automatically arm himself with a silenced pistol when patrolling guards are near, while a rough estimate of their whereabouts appears on the HUD. Trial and error is rare; once their location has been discovered they can then either be dispatched or avoided with ease. Shooting your way out of trouble is possible too, but a far more challenging method – even when dual-wielding a pair of shotguns that perforate eardrums as well as vital organs.

Both chapters have their own villain, each leaving a lasting impression

Set in a once picturesque village divided by a canal, part two mixes things up to the point where itâ€™s hard not to let any spoilers slip. Itâ€™s more of a â€˜grindhouseâ€™ experience, complete with crimson red skies and plenty of claret being spilt. Enemies are far greater in number, but worry not – by this point BJ comes clutching a handy, pistol-sized, grenade launcher thatâ€™s highly satisfying to use. Proficient shooting – such killing certain amounts of enemies while in cover or dual-welding weapons – unlocks perks that assist in combat too, including the ability to add a hulking â€œportableâ€ mini-gun to weapon wheel.

Both chapters have their own villain, each leaving a lasting impression. Tall, blonde and muscular, Rudi Jager is a curiously polite and well-mannered psychopath known for feeding prisoners to his beloved dog. Helga von Shabbs meanwhile is more of your typical egomaniac with a thirst for power, involved with excavating antiques with unknown and mystical properties. Confrontations with these two are tense, backed by well-written dialogue. Being in enemy territory and all, allies are few in number but those BJ is fortunate to meet up with are likewise memorable, including a British nurse who plies our hero with some much needed tea and biscuits. 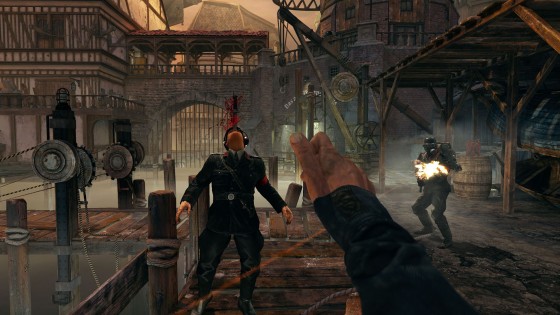 In terms of running time, The Old Blood lasts around 6-7 hours. Additional score-based challenge maps and a revisit to mop up collectables notwithstanding. A shorter experience than The New Order it may be, but one thatâ€™s no less enjoyable. We have no qualms in saying that we enjoyed it slightly more, in fact – the shorter length induces a pleasingly different, and notably faster, pace and although a lot of elements are recycled theyâ€™re reintroduced in ways that make them feel fresh all over again. It also helps that the visuals appear slicker and more detailed, which is presumably down to the absence of last-gen versions.

Weâ€™ve always had a feeling that the last-gen strap was holding the current-gen down. The Old Blood pretty much confirms it, while also reaffirming that Machine Games can do no wrong when it comes to reinvigorating the prestigious Wolfenstein brand.