One game eluded us during this weekâ€™s new release round-up. That game was the mysterious Toro, and as predicted (or possibly feared) itâ€™s a Spanish bullfighting simulator. Presumably developers Recotechnology believe thereâ€™s money to be made by finding the smallest gap in the market possible.

It launched today on both Xbox One (Â£15.99) and PlayStation 4 (Â£19.99). The difference in price is as baffling as Toroâ€™s very existence. The 12+ age rating equally so. We guess those who take the plunge arenâ€™t going to be treated to some grizzly confrontations; something that may have help induce even the slightest hint of appeal. 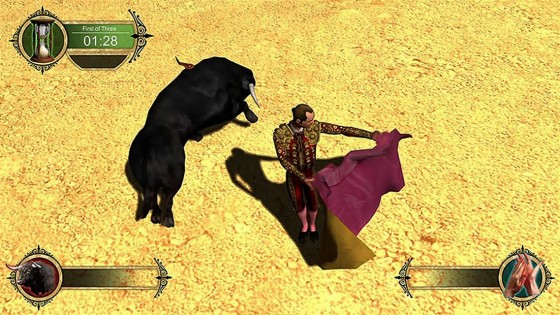 Try to contain your excitement while reading the blurb:

â€œToro, is the first bullfighting simulator game, that will challenge your skills, reflex and fast reactions interacting with 500kg bulls. You will be able to face the bravest bulls in the most famous bullrings worldwide, and become a number one bullfighter In an exciting and fun way, Toro offers the possibility to get in front of the most dangerous bulls and complete a stylish performance with the wide variety of passes that are available for each round Face the bull, combine different passes correctly executed to enrage the bull and do it with style to get the support of the demanding spectators and get the highest scoreâ€.

Had Toro launched at just a few quid – and yes, this price point is possible on the download services – we may have taken a look out of sheer curiosity but the asking price(s) strike us as way off the mark. Something as niche as this should arrive with an impulse buy price tag, like Goat Simulator before it. Heck, for Â£15.99 we could purchase a physical copy of Wolfenstein: The Old Blood and still have change.