Itâ€™s pointless in giving Happy Wars on Xbox One the review treatment as itâ€™s a standard, no-thrills conversion. Thatâ€™s to say, thereâ€™s very little in the way of notable enhancements – the visuals have had a filter applied, coating the landscapes in a gentle haze, and the menus appear to have been spruced up, but itâ€™s the same game underneath. Unfortunately, this means warts and all.

Three years have passed since the Xbox 360 version launched, and yet ToyLogic still hasnâ€™t managed to incorporate an efficient matchmaking service. A session from earlier today provides a perfect example of its ineptness – after being sat in a lobby for a good five minutes we were eventually put into a match with just three other human players. AI controlled teammates filled the slots of the 16 spare spaces. Sixteen. For a free-to-play release thatâ€™s barely a week old, this strikes us very peculiar. The lack of a â€˜mute allâ€™ option to silence other lobby dwellers is another oddity. If the matchmaking service actually put us into fully populated teams we could put up with listening to random people coughing and sputtering into their mics. 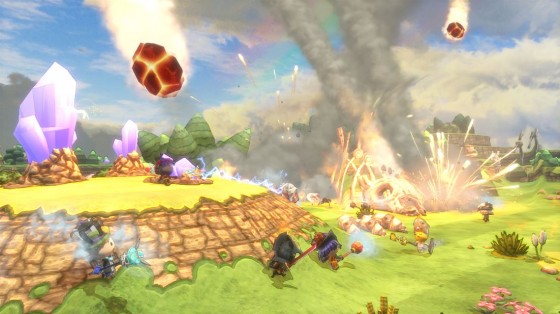 When the matchmaking service does work though, Happy Wars is a delight. Whereas some games can be too chaotic for their own good, Happy Wars gets the level of carnage and chaos just right. Thereâ€™s always plenty going on inside the saccharine sweet environments – which range from dry deserts to underwater arenas – and because of this your attention is grabbed within seconds of a match starting.

Happy Wars gets the level of carnage and chaos just right

For those not aware, Happy Wars is a 10 vs 10 battle game with a focus on capturing towers. Towers act as respawn points, so the more under your control the easier it becomes to dominate the battlefield. At each end of the battlefields a castle is found and itâ€™s here that players fall back to when all towers are lost. Castles are the last line of defence, fortified with stationary turrets and such to provide a fighting chance of survival should the rival team manage to make their way to the castleâ€™s doorstep. If the rival team gets inside and destroys the tower within, then the battle is over.

The key to preventing this is to ensure the team is balanced. Three classes are available – fighter, mage and cleric. Skills are assigned at random with additional skills unlocking throughout battle. Clerics always seem to be in short supply, which is highly frustrating – not only can they heal and resurrect, but also summon building materials allowing construction of battering rams and turrets. Mages meanwhile can add elemental abilities to teammates’ weapons, while fighters can knock the opposition off ledges and such by unleashing a hefty blow. All characters also have their own team attack, and these are both fun and satisfying to use. In some instance they can even help turn the tide of battle. 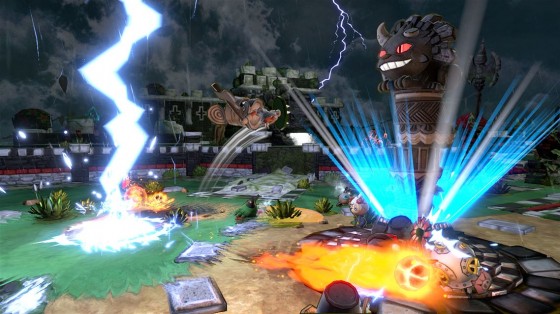 Itâ€™s the special abilities belonging to each class that make Happy Wars balanced, as well as offsetting the use of paid-for-items. Money (as in, real money) is used to buy Happy Tickets which can then be spent on mounts, temporary buffs and packs of trading cards that contain premium items. Trading cards can still be purchased using the in-game currency – Happy Points – but the majority of items are worthless. They are, quite literally, junk – swords made out of fish bones, cardboard armour and helmets formed out of old tin cans. For those not willing to pay, this is the kind of attire your three-strong squad will end up wearing. If you do get lucky and unlock a premium item then chances are that itâ€™ll be too heavy for your current characters to use, thus forcing you to play the game for a few more hours to get their weight classes up. Itâ€™s just as well, then, that Happy Wars has something of an addictive streak.

Considering the majority of Xbox One owners are Microsoft loyalists it stands to reason that most will have played Happy Wars in its previous form. For those who missed it, itâ€™s well worth a download. Just make sure you have something to amuse yourself with while waiting for the lobbies to populate.