Treasureâ€™s Sin and Punishment: Successor of the Skies makes its way to Wii U this Thursday. If youâ€™re a fan of shooters then itâ€™s something of a no-brainer, especially seeing that the Wii Uâ€™s library is hardly overflowing with examples of the genre. 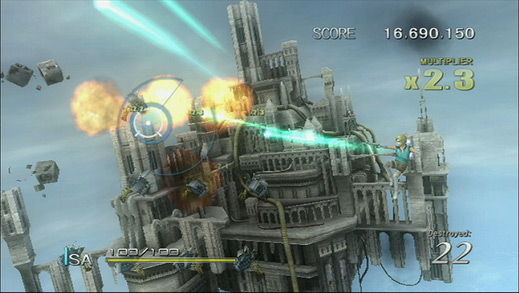 As mentioned during the last Nintendo Direct, amiibos will soon be able to unlock bite-sized chunks of Nintendo classics. Games (or â€˜scenesâ€™ as Nintendo calls them) vary on amiibo, and not all amiibos will unlock the same scene. The download required is cumbersomely titled amiibo Touch & Play: Nintendo Classic Highlights and launches this Thursday for free.

Now seems a good time to remind that amiibo can still be used whilst inside the box by making a small cut along the side of the packaging. Hear that? That’s the sound of their value rapidly decreasing.

The Wii U is also set to receive two Star Wars Pinball tables, via Zen Studios. Heroes Within contains four tables and costs Â£7.99 while the Star Wars Rebels offers a single table and costs Â£2.39.

Sticking with DLC, additional Super Smash Bros. content is coming too. Mewtwo can be had for Â£3.59 on either Wii U or 3DS, or for Â£4.49 on both systems. Hopefully this means weâ€™ll no longer see Nintendo fans on Twitter begging for codes. The Bundle Collection meanwhile costs Â£9.11 for a single platform or Â£13.12 on both. This contains Mewtwo and a bunch of Mii costumes, including a range of Mega Man attire.

The only other new arrival for this week is Excave II: Wizard of the Underworld (Â£8.99) on 3DS, a pleasingly bright and chunky top-down dungeon crawler. Nintendo Life reports that itâ€™s pretty good, if a little short.

The rest of the weekâ€™s discounts mostly comprise of Activision and Shin’en Multimedia titles, including a bunch of Spider-Man, Transformers and Spongebob games available for around the Â£20 mark. The savings are too slight for us to go into full detail, to be honest. Angry Birds Star Wars and Angry Birds Trilogy for Â£7.49 each may be of interest to some though, seeing that Angry Birds Trilogy on Wii U is still absurdly expensive.