Nintendo usually issues their eShop line-up on a Monday morning, but for whatever reason yesterday came and went without. In instances like this we always wonder what the holdup was. Did an eShop release get delayed at the very last second? Are Nintendo still debating internally about what VC games to release this week?

We guess weâ€™ll never find out. What we do know now is this – Thursday sees the launch of Mario Kart 8 DLC Pack 2, a host of Kirby discounts in preparation for next weekâ€™s Kirby and the Rainbow Paintbrush and two VC releases for Wii U.

Those VC releases are the GBAâ€™s Mario Kart Super Circuit (Â£6.29) and the NES cult classic scrolling brawler Street Gangs (Â£3.49). You may know that last one as River City Ransom. Or possibly Downtown Nekketsu Story.

Super Circuitâ€™s arrival is timely as two of the tracks feature in the new Mario Kart 8 DLC. Â£7 gets you eight new tracks – including F-Zero and Animal Crossing crossovers – three new characters and four additional vehicles. The above trailer reveals all.

The 200cc update is incoming too, and will be available to all for free. Thereâ€™s a lot of excitement on Twitter over this, all entirely deserved – MK8 is about to become another step closer to feeling like a new F-Zero. 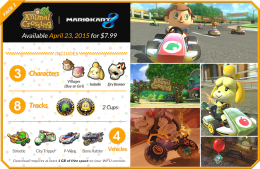 The aforementioned Kirby promotion entails three games on Wii U and three on 3DS. Buy any of these and youâ€™ll get 10% off Rainbow Paintbrush, bringing the eShop price down to Â£31.49. It can still be found cheaper in physical form online, mind.