Whereas many games will be nearing their conclusion once they hit the ten hour mark, Neverwinter sees only the surfaced scratched. As a fully comprehensive MMORPG – the kind consoles have only received in a butchered state in the past (Defiance and Ascend: Hand of Kul spring to mind) – it was always a given that there would be a learning curve. Whatâ€™s surprising though is just how gentle that curve is. Organic, even – instead of dull tutorials there are a handful of easy going missions cunningly disguised as such.

The first ten hours simply see your handpicked hero being prepared for the colossal 60+ hour adventure ahead. Your hand taken gently and the basics explained, all while trying to recover a sacred crown from a gang of mercenaries. This honeymoon period, if you will, also entails picking an AI controlled companion to join your side, while another early mission involves a trip to the stables to rent a mount. With money flowing freely though, you shouldnâ€™t be far off from buying a horse outright by the time comes. These summonable steeds make exploring the Sword Coast slightly less of a trek, ignoring the fact that it only takes a paltry three hits to separate horse and rider. They can’t be relied on to escape danger, that’s for sure. 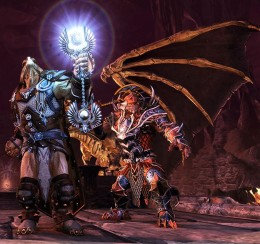 Another early mission teaches how to praise the lords – a feat that can be performed once an hour in exchange for a handful of random goods. It soon transpires that most tasks take an hour, whether it’s sending your AI buddy away for training or partaking in a dungeon crawl with four other players. Another example – it generally takes an hour of questing to level up, unlocking additional skills in the process. Older skills and attacks quickly become redundant, replaced by fancier and more efficient ways to heal and maim.

This near clockwork sense of progression makes an already addictive experience even more addictive, and with so many tasks achievable within 60 minutes (or thereabouts) we very much doubt this is down to coincidence. It more than likely boils down to being a design choice, enticing players into staying online for “just one more hour”. The logic behind even the most complex of aspects is incredibly sound throughout while the pacing, ergo sense of progression, is impeccable. Enter new area and every player you meet will be around the same level – no saviour of the Sword Coast gets left behind.

Every area has a unique enemy faction – Neverwinter’s swamp is suffering from a zombie infestation, for instance, while the local cemetery has been overrun with zealous cult members. Most enemy factions are formed of melee attackers who swarm to your location, projectile flingers who attack from far, spell casters that can evade attacks and damage-absorbing behemoths of various descriptions. Every now and then youâ€™re teased with a surprise appearance of a new enemy type – one early dungeon contains the devil-like entities that arenâ€™t commonplace until stepping into a blood-soaked battlefield much later on – thus giving a sneaky taster of whatâ€™s to come. 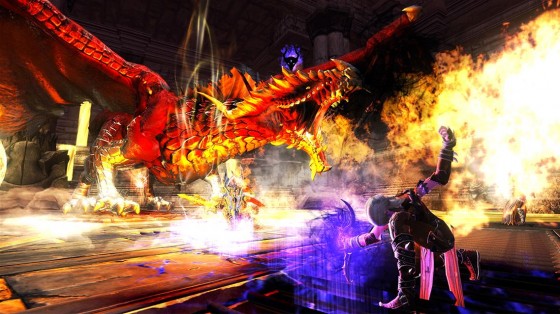 When it comes to the combat system itself, Diablo III is perhaps the closest comparison – a simple case of holding down the trigger buttons to unleash a barrage of flashy attacks while occasionally throwing a damaging cooldown metered attack into the mix. Glowing red patches show where an enemyâ€™s heavy blows are going to hit – evading these is just a case of hitting the R3 button in good time. Some characters evade by dashing out of harm’s way while others simply put a shield up. Over time these red areas become larger and more elaborate. All enemy factions have at least one enemy that only takes a few hits to defeat – a well placed magic attack can take several out at once, which is highly satisfying. Bosses meanwhile shouldnâ€™t cause too much trouble, providing you don’t forget to use a health or defence boosting potion before taking them on.

The same canâ€™t be said for dragon encounters. These huge beasts are quite the spectacle, requiring several players to defeat. They only appear in certain locations and once theyâ€™ve made their dramatic appearance they must be killed before the time limit has run out. When battling dragons the ease of joining up with other players really excels – youâ€™ll often find players that you can form a group with lingering around dragon spawn areas. Voice chat opens automatically and loot is then shared using a greed/need/pass system. Those wanting a break from quests can also partake in brief skirmishes against waves of enemies and PvP matches. Matchmaking is effortless and takes place behind the scenes – when looking for a team to enter a dungeon with youâ€™ll often be paired with various classes to keep the party balanced.

Neverwinter isnâ€™t punishing in the slightest, rarely penalising for mistakes or error

As many functions and abilities require more than one button to be pressed at once, the controls do take a while to consign to memory. Donâ€™t let this put you off, though – Neverwinter isnâ€™t punishing in the slightest, rarely penalising for mistakes or error. Health potions are bountiful and being a MMORPG there are usually other players nearby willing to heal and assist. Our first death didnâ€™t come until around 20 hours in, and even then it was falling off a bridge – a mistake of our own doing because we didnâ€™t realise that itâ€™s possible to jump. In fact, it wasnâ€™t until around 30 hours in that we could honestly say we understood every aspect of the game fully. There are a lot of things to learn and master, and the beauty of it all is that you’re free to explore and discover many of the finer elements at free will.

Oddly, there’s no definable main storyline to knuckle down and focus on. The plot is seemingly present only to accommodate the bulk of mission objectives. To wit – Lich Queen Valindra has summoned a vastly powerful army formed of undead creatures great and small. Everything from zombies and skeleton warriors to skeletal dragons and hulking beasts grossly formed of the bones of the fallen. It’s your job to travel to each of the thirteen areas surrounding the busting Protectorâ€™s Enclave social hub – arguably Neverwinter’s showpiece – and slowly whittle down Valindra’s armies in order to give humanity a fighting chance. Each location usually has two or three quest givers holed up in a makeshift base of some sort, while campfires act as respawn points. Supplies can be purchased and sold here and quests also turned in. 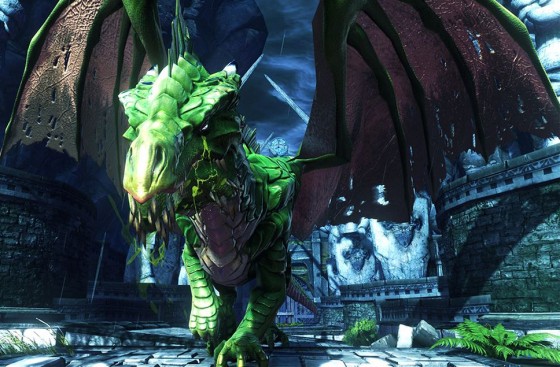 Speaking of quests, a handy journal keeps track of what’s on the agenda. Itâ€™s even possible to abandon quests should you find yourself with too much on your plate. Quests come thick and fast, especially when first arriving in a new area, and as such itâ€™s not uncommon to have three or four on the go at once. Killing a certain amount of enemies before collecting the special items they drop is a theme that soon becomes a little too familiar. The overabundance of fetch quests are at least punctuated with good old dungeon crawls. Loot flows just as freely as cash. So much so that if you pick up everything you come across the inventory will be full before the dungeonâ€™s end. As a free to play release, we did worry was that players would soon be bullied into buying a larger inventory but this pleasantly turned out not to be the case. A second backpack is bestowed not long into the adventure while one of the relics (an optional reward for one of the more in-depth quests) allows a shopkeeper to be summoned at any time.

So where does monetising come into effect, you ask? Well, it pretty much doesn’t – there’s nothing to stop you enjoying Neverwinter without reaching for your credit card. It genuinely feels as if Cryptic designed and developed the whole game before adding the optional, money making, extras. Rideable dragons, spiders and tigers can be purchased using real money that’s then converted into Zen. These beast are of course a tad more exciting than everyday horses. Zen can also be spent on XP boosters, clothing dyes, lockbox keys, extra character slots (two is the standard amount) and an entire new character class – a race of armour-clad bipedal dragons who stand out like a sore thumb against the standard knights, clerics and loveable rogues. The aforementioned lockbox keys are the only IAP Neverwinter draws to your attention to on a regular basis. Lockboxes are common drops – and there’s a chance one will contain a desirable dragon mount – but unless you buy a set of keys (Â£3.99 gets you five) theyâ€™ll linger in your inventory. Unsurprisingly, the auction house is rife with unwanted lockboxes. We were flogging them fifty at a time. 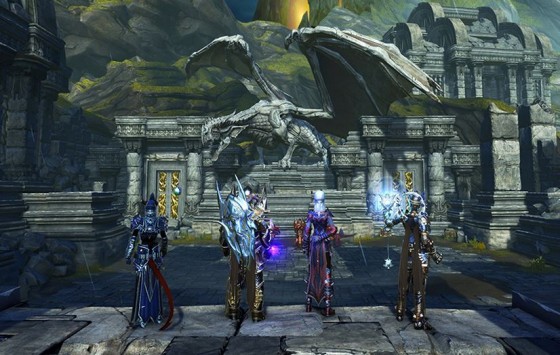 As well as the ability to auction goods, it is potentially possible to exchange Astral Diamonds – gaining from praising the lords – for Zen. We emphasised the word potentially there because itâ€™s hard to imagine any fellow player exchanging purchasable currency for something that’s gained in-game for free. At least thereâ€™s no need to stop what you’re doing and venture to Protectorâ€™s Enclave to access these services as most can be browsed from the main menu. You do however have to head back to the enclave to turn some missions in as Sergeant Knox, one of the main quest providers, is based here. Itâ€™s worth visiting the enclave once a day to pick up the latest dungeon keys too as without these itâ€™s impossible to open the treasure chests found at the end of a dungeon. These often contain armour way stronger than whatâ€™s for sale in stores or gained from random loot drops. 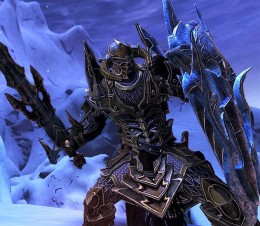 Neverwinter very much feels like a culmination of the greatest RPGs from the past ten years. It has the pleasingly daunting world size and rich lore of Skyrim, the social features that made World of Warcraft such a cultural phenomenon and both the accessibility and instant appeal of Diablo III. There are shades of Fable present as well, such as the occasional offbeat mission and a golden glowing trail that leads to the next objective. A minor inclusion, but one that makes it impossible for players to get lost and subsequently frustrated. Most importantly though, Neverwinter shares the capability of the previously mentioned to make hours fly past as if they were mere minutes. It both looks and feels like a current-gen game too – the humble Xbox 360 wouldnâ€™t have been able to cope with the size and scope of the game world and what goes on inside it.

This is a shining example of a fair and honest free to play experience. It can be enjoyed by all and sundry without spending a penny, all because the paid for extras are simply that – superficial extras. Itâ€™s like getting a sports car for free and then having the option to pay for leather seats. Well, dragon skin seats in this instance. You don’t have to pay out, of course, but it makes the ride a flashier one and you’ll turns heads in the process. If you want to pay for these extras, or throw a bit of money in Crypticâ€™s direction out of sheer courtesy, then itâ€™s entirely your call.