This single-screen platformer takes us back to the days when games required not only lightening quick reflexes but also a vivid imagination. Weâ€™re talking beyond the 8-bit era here and into Atari 2600 territory – a time when box-art helped illustrate a developerâ€™s vision, for all you were presented with on screen were super-sized pixels and a handful of flickering sprites. 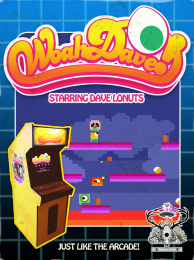 The faux arcade cabinet artwork for Woah Dave! depicts the titular lead as a green-skinned…thing…wearing trainers and a backwards baseball cap. In the game itself youâ€™re just a small pile of pixels; what appears to be Daveâ€™s arm is actually his nose. Daveâ€™s playable chums have slightly more distinguished features, including an appearance from one of the BIT.TRIP crew. This is from the same talent pool, and just like BIT.TRIP. Runner – Choice Provisionsâ€™s (nee Gaijin Games) most renowned title – itâ€™s feverishly addictive.

What we have here is a mixture of Bubble Bobble, Joust and Chuckie Egg. Daveâ€™s only method of attack against a constant onslaught of enemies is to grab and throw eggs – a simple task were it not for the fact that enemies emerge from the very same eggs. Oeuf! So not only do you have to constantly keep enemies at bay to keep their numbers low, but also make sure youâ€™re not stood near any eggs when theyâ€™re about to hatch.

Eggs that are about to turn fowl (sorry) flash red, as do skulls that have the capability to explode. It takes a while to get used to the timing of the flashes – and also the way the eggs bounce along the ground when thrown – but eventually everything clicks into place, and soon youâ€™ll be collecting shiny pennies in a manner thatâ€™ll make Super Mario envious.

Speaking of which, the throwable â€˜smart bombâ€™ power-up has been lifted straight out of Super Mario Bros. 2. At first we rushed over to use â€˜WOAH!â€™ blocks as soon as they appeared but over time we realised that itâ€™s best to save it until things really get hectic. Which they certainly do, because each of the three stages alters over time. On one stage lava at the bottom of the screen starts to rise (hence the Joust comparison), changing the level layout in the process, and usually this happens just when an assortment of new enemy types starts to appear. These include ground destroying UFOs and winged eyeballs that have the irritating habit of lodging themselves underneath platforms.

If you havenâ€™t already guessed by now, Woah Dave! is score based – the incentive is to keep playing, keep improving and keep climbing the score table. For those unable to get their head around such old school sensibilities, there are of course an array of trophies to gain – including some pleasingly daft secret ones – in addition to a faster â€˜Bonkerâ€™s Modeâ€™ that unlocks once the $1.50 threshold has been beaten. This new PlayStation 4 iteration also adds a local multiplayer mode in which two Daves can go head-to-head to collect the most coins.

As much as it pains us to say it, itâ€™s likely that there are gamers out there under the influence that something as simple and crude looking as this has no right whatsoever to be on PS4. Having read the comments that appear on social networking sites after Sony announces an indie-filled PS Plus line-up, we know full well gamers with this mindset exist. The fact that Woah Dave! utterly captivates within seconds of starting only exposes the hollowness of that belief.