As Rebellionâ€™s own Sniper Elite series proved, itâ€™s entirely possible to centre a whole game on one faultlessly executed idea. That idea was, of course, the gratuitous slow-mo sniper shots. This current-gen only series spin-off retains the grizzly sniper kills but the focus now lies on co-operatively mowing down zombie hordes. Every kill is as satisfying as the last, something Rebellion has clearly spent a long time refining to perfection. Craniums explode, limbs sever and despite hitting the dirt after just one or two shots, every member of Hitlerâ€™s undead army still poses a sizeable threat.

Taking on the FÃ¼hrer’s entire zombie army on your lonesome can feel like a slog; something not helped by the fact that the majority of missions involve little more than surviving relentless onslaughts. With additional players in tow though, ZAT really shines. Indeed, this is a game that was designed especially for co-op play. When hosting a game in which random players can join and depart as they please the amount of zombies alters depending on headcount, ensuring that there’s plenty of cannon fodder for all. Private games are an option too, while those seeking a helping hand with a single chapter in particular can join another player’s in progress campaign. Although a co-op experience at heart there is an underhand competitive element owing to the presence of a scoreboard. Every kill earns points and boosts a score multiplier; miss a shot and that multiplier streak ends. Simple yet effective. 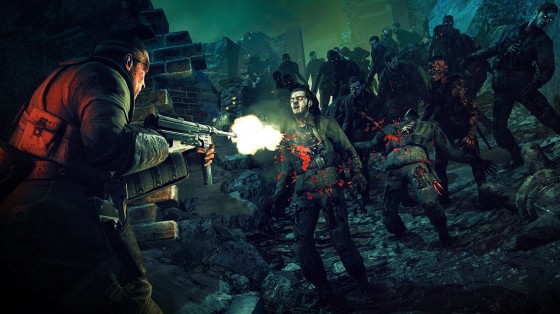 Each of the three episodes takes roughly five hours to finish, bringing the overall runtime of the trilogy to an impressive 15 hours. Set mostly in war torn cities, episodes one and two are much of a muchness. Progression is a simple case of making it from one ammo-filled safe house to the next, occasionally stopping to fight waves of enemies while hunkered down inside a rickety structure of some kind. Ensuring your satchel is full of explosives is nigh essential during these sections: often youâ€™re given a minute or so to fortify defences by strategically placing landmines, trip wire and dynamite. All three have the capacity to stop numerous enemies in their tracks, while a well placed grenade toss can make all the difference to the odds of survival. Those favouring one explosive type over the other can alter loadouts accordingly. Sadly, this is about as far as the character customisation options extend.

Episode three – titled Beyond Berlin – is leaps and bounds beyond the first two. Settings are more varied and elaborate, ranging from a forest with a sawmill to a moving freight train, and there are more ways to maim including incinerators and bear traps. Beyond Berlin also introduces something the series was previously lacking – NPCs, some of which offer sub-quests. Apart from a few grunts and groans, the eight playable characters (four male, four female – take that Ubisoft) are mute throughout and so it falls to the NPCs and the zombies themselves to induce a spot personality into the proceedings. 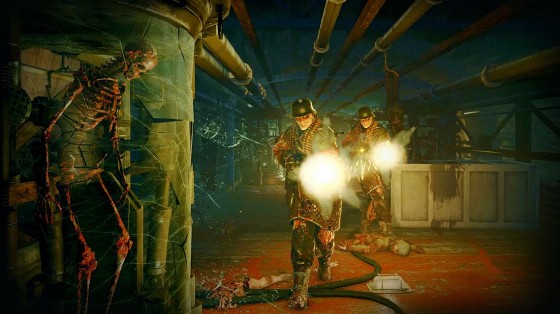 This is something ZAT struggles with and had the eight-strong cast had a voice, then this could have been easily rectified. They donâ€™t even make a sound when throwing a grenade, which we found often results in fellow players wasting valuable explosives. A minor issue in the grand scheme of things, but an issue all the same. Another odd omission is that the eight characters are identical – there are no perks or cons to separate them. Maybe Rebellion wanted the playing field to be even, or perhaps they simply didnâ€™t want to create a class based shooter. Either way, weâ€™d imagine that giving certain characters faster reload times, larger ammo reserves and such wouldnâ€™t have taken a great deal of effort.

And so it falls onto the zombie army itself to prevent ZAT from being entirely faceless. The motives of zombie Hitler drive the plot forward and his minions are bountiful in kind. Even the basic, garden variety zombies wildly vary cosmetically. Most simply make a beeline to your whereabouts, waving spades, knives, broken bottles and whatnot. Some come clutching firearms, but few attempt to use them. Then there are the â€˜elite’ zombies and the â€˜super elitesâ€™ that require multiple headshots to kill, as well as pesky teleporting zombie snipers. And just to keep you on your toes, some zombies have the ability to resurrect themselves. 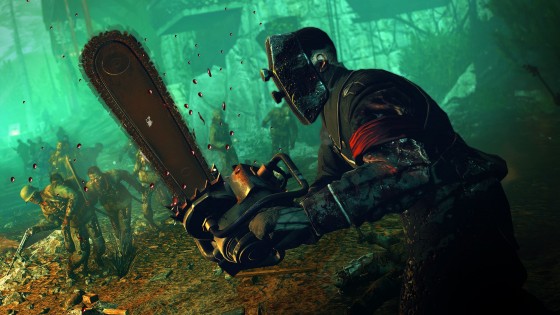 If the 15 hour campaign wasnâ€™t enough to sink your teeth into, thereâ€™s an additional Horde mode that features five maps. Four are large, multi-floored, affairs with plenty of vantage points, and in some instances a mounted turret to whittle down the hordes.

Then thereâ€™s â€˜Dead Endâ€™ which is, quite simply, one long alleyway. Players start with their backs to the wall while zombies shuffle from out of the mist clouding the opposite end of the alley. Now hereâ€™s the twist – ammo reserves are located at the end of the alley, thus forcing a â€˜suicide runâ€™ every time supplies gets low. When we first tried this map we were quick to dismiss it as being lazily designed but it eventually emerged as a work of twisted genius. Itâ€™s also a good place to grind out achievements. Incidentally, we bagged the one for killing 5,000 zombies way before the end of the third episode. If that doesnâ€™t give a good indication of how relentless the hordes are, then we donâ€™t know what will.

According to the Xbox Oneâ€™s dash we spent a remarkable 17 hours with ZAT before penning this review. The first two episodes did grow wearisome at times, prompting us to team up with random strangers to make it through to that chapter’s end, but we did find much to enjoy in the vastly improved third episode. That said, we did often find ourselves thinking about what ZAT could have been instead of simply enjoying whatâ€™s on offer. Rebellion has crafted an equally inviting and compelling co-op experience, thereâ€™s no debating that, yet with just a bit of extra effort it could have something more. It’s just not broad enough to rub shoulders with Dying Light and Dead Rising 3, and so it has to settle for third place in the current-gen zombie genre hierarchy.

Our advice is this: enjoy it for what it is – a sturdy shooter intended to bring friends together for a spot of undead deliverance. Everything else it excels at is simply a bonus.