Frontierâ€™s fascination with rollercoasters continues in ScreamRide, but unlike management sim Rollercoaster Tycoon this isnâ€™t something thatâ€™s quite as easy to categorise. ScreamRideâ€™s trio of distinctly different challenge types can easily be broken down and described though, taking the form of on-rails arcade-like racing, sandbox coaster construction and a spot of physics-based destruction. We were tempted to describe the destruction mode as â€˜3D Angry Birdsâ€™ but we arenâ€™t that callous.

ScreamRideâ€™s structure is sound, even if each mode – ScreamRider, Engineer and Demo Expert, to use the correct terminology – has some notable shortcomings. To wit: the career mode is split into six chapters featuring three score-based challenges for each mode. If you hit a brick wall, proverbial or otherwise, itâ€™s entirely possible to head back to the menu and try your hand at riding coasters instead of creating them. Those favouring one mode over another – something highly likely, seeing as ScreamRider races are quite literally on-rails – can simply plough through a certain modeâ€™s challenges without having to face any of the lesser liked modes. A five star rating system holds it all together; hitting the maximum rating for each challenge will take considerable time. 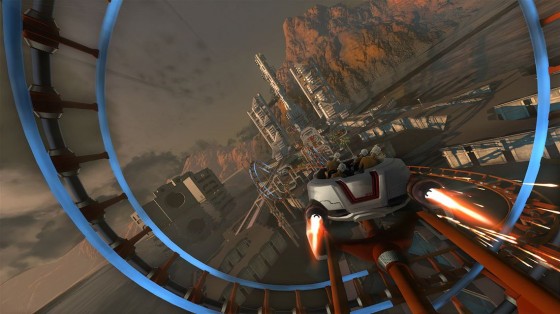 The career mode plonks you straight behind the non-existent wheel of a rollercoaster, so weâ€™ll talk about â€˜ScreamRidingâ€™ first. Itâ€™s a very arcade like experience, and all that it implies – the controls are mapped onto the controller in typical racing game fashion; hitting the accelerate button on the starting grid at the right time provides a boost start.

thereâ€™s something to admire about ScreamRideâ€™s futuristic, clean-cut, aesthetic

Gaining additional turbo boost via some well timed button presses is essential to beating pre-set lap times but not quite as necessary as â€˜leaningâ€™ into corners to stop passengers flying out of their seats. Worry not – the premise explains that no harm comes to the thrill seekers eager to try out your creations. They simply land in the watery depths that surround each and every coaster, waiting with a huge smile on their face to be recovered by Scream Worldâ€™s faceless staff. Faceless because they wear futuristic Daft Punk-esque helmets.

Problems with ScreamRider mode are both numerous and obvious; the on-rails nature is incredibly restrictive (we managed to pass some challenges simply by holding down the accelerator, and nothing else) and although new ideas are introduced from one stage to the next, they arenâ€™t as forthcoming as in the other modes. The dubstep soundtrack is something of an acquired taste too, although to be fair it does complement the bold and brash presentation quite nicely. Indeed, thereâ€™s something to admire about ScreamRideâ€™s futuristic, clean-cut, aesthetic. Visualising Faith from Mirrorâ€™s Edge running along those delectably destructible environments really doesnâ€™t take much imagination. 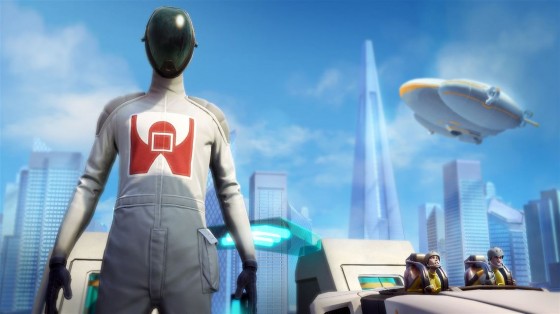 And so on to the Demo Expert mode; an entirely different and altogether more engaging experience from riding the rails. Here youâ€™re tasked with flinging test-subject filled capsules at structures rigged with explosives. Certain levels of destruction have to be obtained to move onto the next challenge while bonus points are gained by guiding the capsules through hoops, smashing through TV screens and activating chain reactions. Achievements meanwhile can be had by hitting the blimps, helicopters and speedboats that appear in the picturesque backdrops. Secret achievements, no less.

Two things really stand out in this mode – the physics engine and the rate that new things to play around with are introduced. Many of these lend a puzzle game element to the proceedings, such as having to land capsules on to huge magnets so that they can be fired in a previously unobtainable direction. Trampolines also allow access to stashes of explosives and whatnot, while nuances – such as being able to skim the capsule along the waterâ€™s surface – are ready and waiting to be exploited by those who experiment. Demo Modeâ€™s concept may not be cerebral, but thereâ€™s no denying that Frontier has wanton destruction licked. 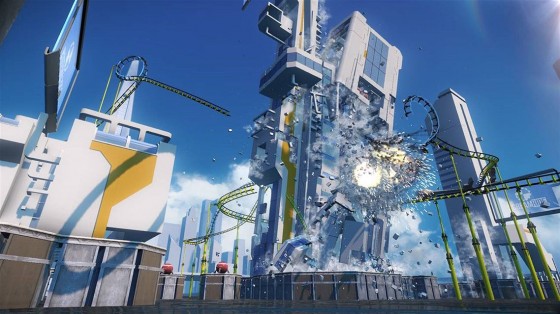 As youâ€™d expect coming from the home of Rollercoaster Tycoon, the sandbox construction and Engineer Modes are comprehensive too. The latter involves creating bespoke rollercoasters that must match certain criteria; length, speed, scream rating, proficient use of feature pieces and so forth. Rides can be tested at any time and then re-edited the very second riders start to fly off in all directions. Although there is a tutorial tucked away somewhere, itâ€™s safe to say that most will take to coaster creation like a duck to water thanks to the intuitive interface.

All modes have instant restarts, but here theyâ€™re integral to the experience – after testing a ride the areas in which your coaster needs refinement are highlighted, allowing you to then iron out the kinks. As progression in the career mode is made the challenges become more elaborate and in some instances are quite imaginative, such as having to craft a coaster around a series of spinning pendulums. 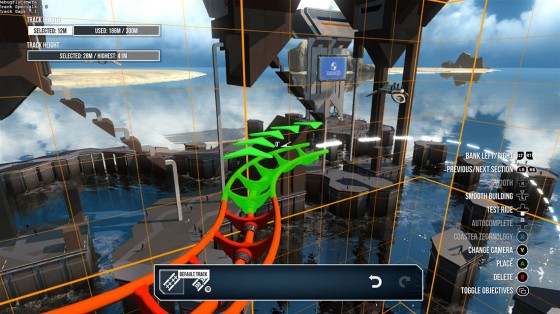 But while coaster crafting is a comprehensive experience, allowing both full creations and blueprints to be designed and shared online, it quickly became apparent to us that really there are only three potential outcomes after putting your coaster to the test – slow but safe, dangerous to the extreme or a death defying ride of high speed and thrills. Once we discovered this firsthand, we pretty much lost all interest in creating coasters; something not helped by the fact that some challenges in Engineer Mode can be â€˜one starredâ€™ simply by hitting the auto-complete button.

ScreamRide is something of a likeable but unsteady package, then. Weâ€™re glad that Microsoft still takes a gamble on things slightly different from the norm, especially in this day and age where videogames cost an absolute fortune to develop, but thereâ€™s an inconsistency here thatâ€™s hard to ignore. An experience full of ups and downs – ScreamRide is precisely that.