Regular readers will know that we have something of a soft spot for the SEGA Game Gear, having penned numerous 8-bit related features over the past couple of years. Itâ€™s one of those formats we could talk about all day long and for reasons aplenty.

We arenâ€™t blinkered to the fact that the ageing handheldâ€™s screen quality is atrocious when compared to todayâ€™s standards, but we do hold its software library in very high regard. SEGA was seemingly very picky about what games to publish in Europe, and because of this the handheldâ€™s catalogue is rife with hidden gems and import-only titles almost entirely unheard of.

Indeed, Europe really got screwed over when it came to the Game Gearâ€™s release schedule. Itâ€™s understandable that publishers would shy away from releasing US sports sims and text-heavy RPGs, but denying the release of comic book tie-ins, arcade conversions and even a few big-name first-party efforts from SEGA Japan is another matter. A good example here is the 1994 racing spin-off Sonic Drift – the sequel was released in Europe under the guise of Sonic Drift Racing in 1995 – but the original never left Japan. Incidentally, and rather lazily, Sonic Drift Racingâ€™s title screen still bared the name Sonic Drift 2.

This feature originally began as a straightforward list of games European Game Gear owners missed out on, but due to sheer number we ended up sorting them by category.

Next time youâ€™re feeling miffed that some little-known RPG is passing western gamers by, just remember that European Game Gear owners didnâ€™t exactly have the pick of the litter.

Just like the Mega Drive, the Game Gearâ€™s initial line-up comprised mostly of arcade conversions. The likes of Space Harrier – which was far more than a simple conversion of the Master System version – fared well on the system and were strong sellers. Namcoâ€™s Mappy however was never released outside of Japan, with the simple reason being that Namco didnâ€™t publish GG software outside of their home turf.

Out of the nine games Namco released for the format, Galaga â€™91 (aka Galaga 2) was the only one picked up for a western release.

Two from Taito escaped European gamerâ€™s clutches also. Itâ€™s easy to figure out why Bust-A-Move didnâ€™t make it – when it arrived in 1996 software sales were slowing down drastically in the US and pretty much non-existent in Europe – but as to why 1991â€™s Chase HQ didnâ€™t make it is a mystery.

Battle hardened gamers will know that the vast majority of â€˜80s and â€˜90s movie tie-ins were terrible – it was a time when publishers could always bank on licensed software to turn a profit, even if the game itself was an abomination. Say hello to Cutthroat Island, Surf Ninjas, Cliff Hanger, The Last Action Hero and The Lost World: Jurassic Park. At least we got Acclaimâ€™s True Lies tie-in, eh?

Majescoâ€™s re-issue of the long lost Super Battletank notwithstanding, 1997â€™s The Lost World: Jurassic Park takes the honour of being the Game Gearâ€™s last ever release. If it wasnâ€™t for FIFA 98, it would have been the last European Mega Drive game too.

As mentioned already, by 1996 the Game Gear was fading fast. Clearly, SEGA must have thought that the license was so prestigious that even such a belated release would still generate some cash. Although the ability to play as a dinosaur holds some appeal, both the 8-bit and 16-bit Lost World tie-ins were painfully average.

Surf Ninjas, Cliff Hanger and The Last Action Hero werenâ€™t up to much either, with Cliff Hanger in particular having all the hallmarks of a rush job. Acclaimâ€™s Cutthroat Island – based on one of the biggest flops of all time – isnâ€™t without merit though, borrowing more than a couple of elements from Prince of Persia. Itâ€™s one of those rare games thatâ€™s actually better than the film on which itâ€™s based.

Oh look – more arcade conversions. Pac-Man was, and still is, a great game. However, itâ€™s doubtful that by the time 1991 rolled around too many gamers would have coughed up the best part of Â£30 to play it their shiny new Game Gear. Especially when SEGA was busy shoving Sonic the Hedgehog in gamerâ€™s faces at around the same time.

As such, poor old Pac-Man failed to reach European shores. The same then went for Ms. Pac-Man and even the underrated Tetris-inspired puzzler Pac-Attack.

A fourth Pac-Man game was once due for release on GG – scrolling platformer Pac In Time, which was pencilled in for a 1994 release. Developed by French studio Kalisto, this one may have stood a chance of making it to Europe had it not been cancelled at the eleventh hour.

SEGA released three X-Men adventures, each a year apart. Oddly, only the second of these – 1994â€™s X-Men: GamesMaster’s Legacy – was granted a Euro release. And no, it didnâ€™t star Dominik Diamond.

SEGA wasnâ€™t the only one to dabble with the X-Men. Acclaim released Spider-Man and the X-Men: Arcade’s Revenge in 1994 as well, under their Flying Edge publishing label. Despite Spider-Man: Return of the Sinister Six and the original plain old Spider-Man gracing Europe, Arcadeâ€™s Revenge remained in America. The same went for Iron Man X-O Manowar in Heavy Metal – which launched alongside the PSone and SEGA Saturn versions, making it a very late release – and the notoriously terrible Captain America and The Avengers.

Weâ€™re also going to mention Bartman Meets Radioactive Man here. Although Bartman rarely appeared in the show, merchandise featuring Bartâ€™s superhero persona always proved popular with fans. Inevitably, a comic book series followed which was then accompanied by a rather unremarkable platformer for NES and Game Gear. Although the backdrops were well-drawn and Bartâ€™s ability to shoot lasers from his eyes is unintentionally amusing, it suffered from the same problems as Bart vs. The Space Mutants and Bart vs. The World before it – horrid controls and frustrating, pixel perfect, platform jumping. This doesnâ€™t stop it from being sought after by collectors though. Even unboxed copies can sell for around Â£20-Â£30, making it one of the slightly more expensive GG titles to acquire.

On the flipside, Europe did get an exclusive Superman game – 1992â€™s Man of Steel, published by Virgin.

When Desert Strike made its way to Master System and Game Gear many were surprised by how similar it was to its 16-bit counterpart. Sadly, this was the only instalment of the three-strong â€˜Strikeâ€™ series to grace European systems.

We pin this on EAâ€™s support for the GG in Europe being minimal at best. Confusing too – Madden 96 made it out, but neither Jungle Strike or Urban Strike did. Perhaps we should just be grateful that EA left Shaq Fu in the US.

Urban Strike, like Madden 96 and its soccer sim cousin FIFA 96, can be tricky for find nowadays due to having very small print runs. At the time of typing thereâ€™s just one copy of FIFA 96 on GG on eBay, priced at a rather eyebrow raising Â£75.

On a related note, Choplifter 3 was another that failed to land in Europe.

When talking about the Game Gear, people always seem surprised to learn that Mega Man made the jump to SEGAâ€™s handheld. Capcom’s involvement was limited; it was simply a licensed effort from US Gold that merged the best bits of Mega Man 4 and 5. Europe wasnâ€™t alone in not receiving this popular collectorâ€™s piece – it wasnâ€™t released in Japan either. 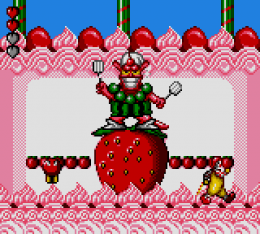 All of these are popular collectorâ€™s items nowadays, especially the version of Coca-Cola Kid which came on a red cartridge.

One import-only offering that isnâ€™t popular is Greendog: The Beached Surfer Dude – the amount of copies on eBay would suggest that nobody wants it. We recall the Mega Drive version being quite popular, so why this one didnâ€™t make it to Europe is yet another mystery.

Enough doom and gloom – the Game Gear did gain a handful of European exclusives, most of which which were based on European cartoons and comics such as Asterix, The Ottifants, TinTin and The Smurfs. Can you believe one of the SEGA magazines tipped German cartoon The Ottifants to be as big as The Simpsons?

Curiously, and for reasons unknown to us, Mortal Kombat 3 was a Euro exclusive too. The previous GG iterations of Mortal Kombat were surprisingly good, retaining the responsive controls and fast pace of the arcade originals. For this third iteration though the baton was passed over from Probe to Software Creations. The new team clearly struggled to get it running smoothly; the animation was so shoddy that it was akin to playing a Tiger LCD game. Weâ€™d rather play Rise of the Robots on Game Gear, and thatâ€™s saying something.