The original Shadow Warrior was released a year after Duke Nukem 3D. Whereas Duke Nukem went on to appear in numerous spin-offs – no less than 13 different studios have created games starring the cigar smoking macho man, in fact – Shadow Warriorâ€™s protagonist Lo Wang was consigned to obscurity. That was until Polish developer Flying Wild Hog thought it was about time Lo Wang came out of retirement, ready to star in this radical reimaging.

Itâ€™s fair to say that when Duke Nukem Forever finally limped out of the door in 2011 most found Duke himself to be almost entirely irrelevant to todayâ€™s gaming culture. Crass, egotistic and puerile – heâ€™s everything that todayâ€™s heroes arenâ€™t. This is where Lo Wang, name notwithstanding, has the upper hand. Flying Wild Hog did away with all racial slurs and stereotyping for their reboot, and as a result Shadow Warriorâ€™s humour is far more tasteful than it was back in 1997. Sure, Lo Wang may rely on sarcasm a touch too often but his sarcastic quips are still far more welcome than lowbrow innuendo. Collectable fortune cookies help to raise a grin also, with one humorously informing that â€œcardboard belts are a waste of paperâ€. 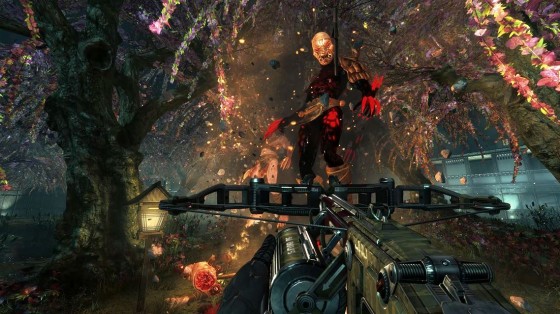 Lo Wang is joined by Hoji, a softy spoken spirit bound to a mask – the one possession they were allowed to bring back to our world. Conversations between the two often amuse (for a 200 year old spirit, Hoji is surprisingly well-versed with pop culture) and the fact that they canâ€™t recall why they were banished from Earth in the first place adds an air of mystery to the storyline.

Shadow Warrior feels like itâ€™s the game that Red Steel should have been, giving players the choice of slicing and dicing the demonic adversaries with various ancient swords or falling back on modern day firepower. Guns and swords can be swapped between at a push of a button, while a ‘quick swipe’ ability helps to keep enemies at bay while reloading. On top of this, Low Wang can throw shurikens and cast magic via beatâ€™em up style button combinations. The idea is to use as many different attacks as possible during enemy confrontations in order to achieve a five star combat rating. This brings a welcome sense of Bulletstorm into the proceedings, preventing you from relying on one or two weapons or just the sword. 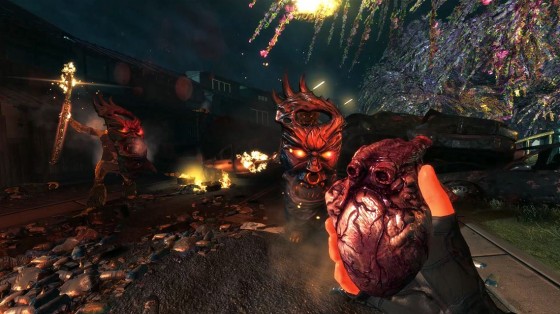 A quick way to rack up a high score is to use explosive objects to your advantage. Thereâ€™s a neat line of pyrotechnics that helps to mask the visual shortcomings in other areas – you canâ€™t but help to fire a round or two into the explosive barrels and such that litter the oriental environments. Arcade machines in particular explode in a highly satisfying manner, each of which is decorated with artwork from recent indie hits including Hotline Miami.

If there is a problem with combat, itâ€™s that the majority of weapons feel significantly underpowered. This is all down to one incredibly bizarre omission – the joypad doesnâ€™t rumble when filling foes with hot lead. Hopefully Flying Wild Hog will one day release a patch to rectify this, as the lack of physical feedback is notable throughout, especially when using the assault rifle. 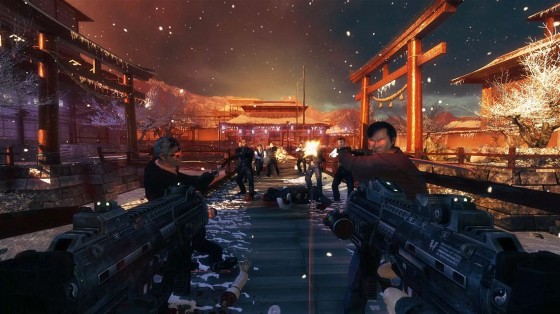 New weapons, magic attacks and enemy types are both introduced and unlocked on a regular basis to keep things fresh, while the secret areas – some of which will please fans of the 1997 original – provide a decent reason to stray off the beaten path.

In fairness, you never really have to stray that far – the level design favours narrow passage ways, often connected to larger areas with their own branching paths. The first few chapters are set amongst oriental villages and palaces (â€œCan you be any more fucking clichÃ©?â€ Lo Wang quips upon entering a garden full of cherry blossom trees and koi carp ponds) and the majority of these chapters have a focus on finding and destroying shines. These shrines may as well be coloured key cards, each of which opening a door of a certain colour. This is something that soon grows tedious, but at the same time itâ€™s easy to appreciate that the developers wanted to include aspects from the original within the level design.

Shadow Warrior was released on PS4 and Xbox One at around the Â£25 mark; a price that has been slowly falling ever since. Although far from ugly, itâ€™s probably not going to age as gracefully as some of the more recent first-person shooters, but for those looking for an alternative to Wolfenstein: The New Order et al its well worth investing. Should it ever appear on PS Plus or be given away via Microsoft’s ‘Games with Gold’ promotion, it would certainly silence those who claim the monthly freebies are always rubbish.