So there we were thinking that a Zelda eBay round-up would be pleasurable to write, when in fact it was actually pretty disheartening.

This is all down to the copious amount of limited edition New 3DS Majoraâ€™s Mask pre-order bundles being sold for vastly inflated prices. We even spotted some marked up as high as a grand. Thankfully it would appear people wonâ€™t abide for this nonsense, as the majority are yet to attract a single bid. 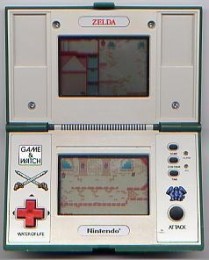 A few older Zelda-branded limited edition handhelds have sold for high amounts however. Not one but two Zelda: Minish Cap collectorâ€™s editions have broken the Â£2k barrier recently – one on a â€˜Buy It Nowâ€™ and another on a standard auction that received 38 bids.

Upon release these big-box collector’s editions could only be purchased with Nintendo Stars and were limited to a run of 300 units. Each came with a certificate showing their limited edition number (289 and 298 were sold, incidentally) along with a limited edition GBA SP, a black T-shirt, a copy of the game itself and a beanie hat embroidered with the Triforce symbol.

A couple of Zelda: The Phantom Hourglass Nintendo DS Lites sold for eyebrow rising amounts too. One was new and sealed and ended at Â£1,900 after 21 bids while another sold for Â£720 after 7 bids.

These simply featured the Phantom Hourglass logo embossed on a silver Nintendo DS Lite and came bundled with a copy of the game. A limited edition golden DS Lite including Phantom Hourglass also sold for Â£311 after 16 bids. 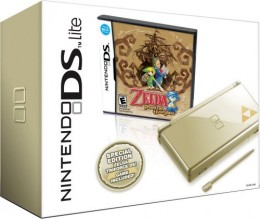 Proving that eBay can be a nightmare at times, one seller seemingly had a spell of bad luck. After selling a factory sealed copy of Zelda: Ocarina of Time on N64 for Â£370 the buyer refused to pay. It was then listed for a second time where it sold for Â£250. And then for a third time, where it eventually sold for Â£245. Third time lucky, eh?

A signed copy of Zelda: A Link to the Past on SNES meanwhile sold for Â£205. Signed by Shigeru Miyamoto, of course. The fact that his signature looks like a pair of boobs amuses us.

Going back to Club Nintendo-exclusives for a moment, it would appear that the golden Zelda: The Twilight Princess statue – which isnâ€™t actually made of gold, we should point out – has come desirable lately. This one here sold for Â£339, while another ended at Â£225.

Lastly, a link to the past of a different variety. Over the past month or so boxed Zelda Game & Watches have been steadily selling for for around Â£200 – approx Â£50 more than Nintendoâ€™s latest 3DS.

We canâ€™t help but feel that the New 3DS is sorely lacking a â€˜Water of Lifeâ€™ button.