The gaming community has had an influence on #IDARBâ€™s development right from the outset. It all began with a screenshot posted on Twitter showing a red rectangle stood amongst a few grey and white platforms. â€œWhere do I go with this?â€ questioned designer Mike Mika.

Suggestions came flooding in and soon a green rectangle joined the red one, along with gravity and collision detection. Use of the hashtag #IDARB – an acronym for â€˜It Draws a Red Box’ – gave the game its name, and over time #IDARB evolved into what you see today – a glorious mixture of NBA Jam, Worms and Super Smash Bros.

While it’s impossible to compare #IDARB to one game alone, thereâ€™s no debating that it doesnâ€™t fall within the sports genre. Just like Pong, the granddaddy of gaming, the aim of #IDARB can be summed up in a single sentence: avoid missing goal for high score. Controls have been kept purposely simple, and those weaned on NBA Jam will feel a welcome sense of familiarity with the three-button jump/pass/shoot set-up.

Thatâ€™s not to say that there arenâ€™t nuances however; itâ€™s not long after the basics have been mastered that #IDARBâ€™s hidden depths become apparent, including a bounce-based score multiplier and the ability to â€œfizzâ€ the ball by flicking the analogue stick back and forth so that it rockets across the screen like a shaken soda can. 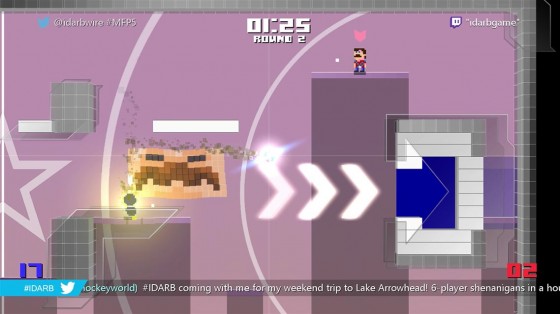 Community aspects extend way beyond influencing the overall design. Crude but functional tools allow for pixel art characters, banners and even short pieces of music to be created and then shared via QR codes. As soon as the game launched players were sharing their 8-bit style creations and looping chip-tunes on gaming forums and social networking sites. As to whom your next match will be against is a complete mystery, and all the better for it.

it’s impossible to compare #IDARB to one game alone

For those lacking in artistic skills thereâ€™s a wealth of ready made characters to pick and play as. The majority of these are stars from other indie games, including renowned faces from various Team 17, Double Fine and WayForward titles.

With its 8-bit aesthetics #IDARB may appear to be resounding simplistic but thereâ€™s a fair bit of technical wizardry going on behind the scenes. Twitch and Twitter iteration is a perfect example, allowing spectators to intervene by dropping â€˜hashbombsâ€™ – code words that trigger all kinds of effects to make scoring a goal a far trickery task. Reversed controls are just the tip of the iceberg – a pixelated Ricky Astley can be called in to â€˜Rickrollâ€™ players, while the pitch itself can be altered in numerous ways such as coating all platforms with ice.

This makes #IDARB just as entertaining to watch as it is to play. Purists (and spoilsports) should worry not as â€˜hashbombsâ€™ can be turned off. For such a simple game thereâ€™s a surprising amount of options. 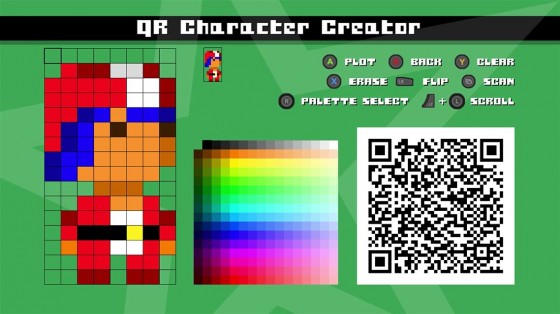 Also of the note is the presence of a single-player mode, complete with suitably daft cut-scenes and a Mortal Kombat-style progression table. Halftime mini-games meanwhile rip off the likes of Flappy Bird, Track and Field and Combat in a pleasingly tasteful and nostalgic manner.

What really holds #IDARB together though is the outlandish presentation. Numerous games have featured internet memes in the past, but this is one of the few were their inclusion doesnâ€™t feel like a cheap and lazy attempt to induce humour. Watch_Dogs, weâ€™re looking at you here. As well as a smirk inducing â€˜rage quitâ€™ screen, the match commentator has unrivaled enthusiasm, blurting out movie and TV quotes and making nonsensical pop culture references whenever a goal is scored. Which is often – matches ending with 50+ points on the scoreboard isn’t unheard of. 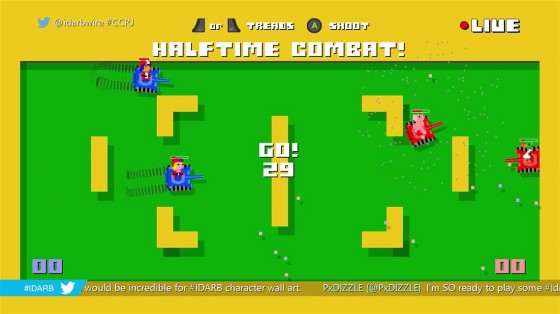 As you can probably tell by now, we have developed something of a soft spot for #IDARB. Sadly, a few issues prevented us from being totally smitten. The biggest of these by far is that when playing online in single-player you’re unable to join a team of random players, thus forcing all the lonely souls out there to go at it one-on-one. This goes against the whole grain of #IDARBâ€™s â€˜for and by the communityâ€™ ethos and weâ€™d even go as far as saying that it could damage the gameâ€™s popularity in the long run.

Slightly less damaging is the fact that thereâ€™s only one arena – surely the benefit of creating a fictitious sport is the ability to create numerous, and varied, playing fields for players to duke it out on? That said, the sole pitch layout present has clearly been tinkered and honed to perfection. When you start ricocheting shots off platforms – and even round the back of the goal itself – youâ€™ll soon appreciate the amount of playtesting #IDARB has clearly received, making those last second victories all the sweeter.