After making a splash on mobiles and tablets, Vector Unitâ€™s futuristic racer arrives on Xbox One. Donâ€™t let the fact that itâ€™s a mobile conversion put you off – there are no microtransactions in sight, and for something arriving with a mere Â£3.99 price tag itâ€™s accomplished enough visually. Not a stunner by any means, but the water effects are suitably inviting and it shifts at a fair old lick.

Although it may resemble Wave Race on first glance, Riptide GP2 actually has more in common with Hydro Thunder. Thereâ€™s sound reasoning behind this – Vector Unit developed the often forgotten XBLA entry Hydro Thunder Hurricane. It’s a shame the developers didn’t pay closer attention to Midwayâ€™s hit arcade series as the designs of the futuristic jet skis are rather unimaginative and thereâ€™s no excessively enthusiastic race commentator. The nondescript racers are mysteriously mute throughout, in fact – the occasional celebratory fist pump is about as much emotion as they show. 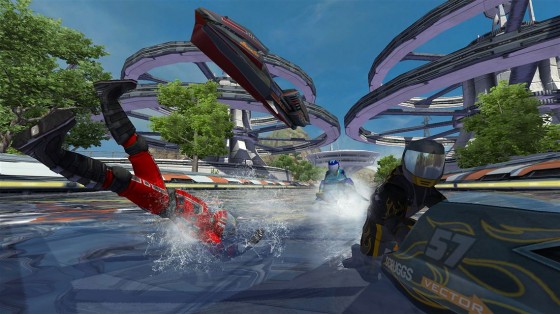 This has a huge knock-on effect on the atmosphere as a whole, leaving only the quiet hum of the jet skiâ€™s engines and generic trance, drum and bass and a few dubstep-esque beats to fill the void. Crafts and rider’s attire can both be given a custom colour scheme, but as youâ€™d expect, this falls way short of inducing any notable degree of charisma or identity.

Track design likewise fails to provide personality, with many indistinguishable from one another. After spending an hour or so jetting around numerous industrial and stadium-based tracks, being presented with a snow covered racecourse felt like a genuine breath of fresh air.

At least there’s plenty of variety within the race types – including elimination and hot lap events – and the vehicle handling veers on the right side of casual; easy going but you still have to rely on braking to get around tight corners unscathed. Indeed, its arcade roots are more than apparent – thereâ€™s no pitch and yaw to contend with while airborne, and as long as tricks are completed before hitting the surface your rider wonâ€™t find themselves treading water too often. Mess up a trick on a hot lap event though, and then you may as well restart again. The top tier time-limits donâ€™t allow for a single mistake. 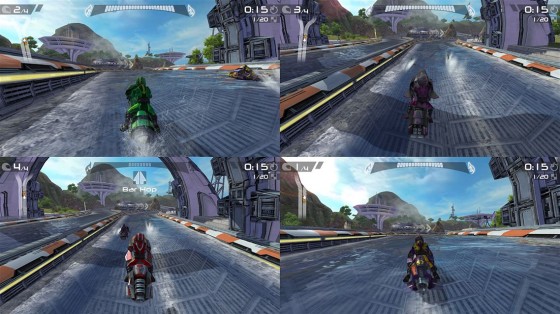 Performing tricks fills the boost bar, with just a small selection available at the start. Additional tricks can then be purchased after levelling up, as well as enhancements to the boost bar that prevent it draining quite so rapidly. These improvements soon become vital to progression, prompting a return to previously completed events to gain enough stars to unlock the next set of races. In other words, Riptide GP2 was purposely designed with grinding and replaying races in mind.

Saving up cash for a new craft can take a fair while, and itâ€™s here that the absence of online play becomes highly notable. If cash could be acquired by playing others online, then maybe grinding wouldnâ€™t be quite the chore. Perhaps we should just be grateful that thereâ€™s local multiplayer, including a somewhat unexpected 6 player mode.

While Riptide GP2 may stump up few surprises, itâ€™s still substantial enough to recommend to fans of arcade racers of yore. Itâ€™s pretty hard to dislike something that offers a wet weekendâ€™s worth of entertainment for the price of a pint.