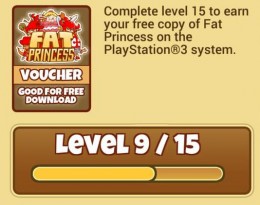 We plan to review it at some stage, but for now weâ€™re willing to say that itâ€™s yet another solid but unspectacular match-three puzzler.

It does, however, have a rather nice incentive to keep playing – once level 15 has been beaten a code to download the original Fat Princess on PlayStation 3 unlocks. Itâ€™s currently Â£7.99 on PSN ($14.99 in the US) so itâ€™s definitely worth the effort.

Weâ€™re currently on level 9 after around an hour of play, so by rough estimation level 15 should only take around two hours to reach. Donâ€™t quote us on that though – we do fear that weâ€™re about to hit a pesky paywall at any moment.