Nintendoâ€™s eShop schedule for this week includes the start of SEGAâ€™s second batch of 3DS revamps. 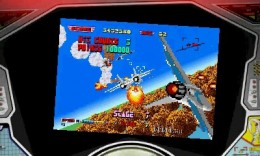 3D After Burner 2 is the first arcade classic to fly out the door, priced at Â£4.49. 3D Fantasy Zone, 3D OutRun, 3D Fantasy Zone II, and 3D Thunder Blade are then to follow in the coming months.

SEGA’s previous retro re-releases have offered more than just the original game with stereoscopic 3D – most have additional options and a few other refinements, such as new music. In 3D After Burner 2‘s case, there’s an assortment of arcade cabinets to choose from.

Then we have celebrated SNES shooter Axelay (Â£5.49) and Capcomâ€™s Ghouls â€˜nâ€™ Ghosts spin-off Demon’s Crest (Â£5.49). Both are well worth your time and money – Axelay was once awarded pride of place on the cover of Retro Gamer magazine.

As you can see for yourself, it’s heavily influenced by Plants vs. Zombies:

At least Namco-Bandai has sense, reducing a load of titles to prices that’ll suit those feeling this monthâ€™s pinch.

We recently spent some time with PAC-MAN and the Ghostly Adventures 2 and found it to be the biggest pile of nonsense ever.