The third year in a consoleâ€™s life is usually a jubilant one. By now the console will be well established, with a user base large enough to attract studios large and small, not to mention having a sizeable enough market share for publishers to take a gamble by releasing niche titles.

This isnâ€™t quite the case with the Wii U however. As the console enters its third year on sale, third-party publishers have all but deserted. Theyâ€™ll no doubt return towards the end of 2015 – even the humble Wii saw a slew of new software this winter, after several quiet months – but we can expect bare minimum support from the remaining Wii U publishers. By definition of which, 2015â€™s iterations of Skylanders and Disney Infinity, Just Dance 2016 from Ubisoft and whatever LEGO titles Warner Bros. has planned. LEGO Jurassic World, if LEGO Batman 3â€™s ending is anything to go by.

As for SEGA, who knows? The company as a whole is a mystery these days. The fact that the 16-bit Sonic games are still to be released on Wii U Virtual Console would suggest they have a colossal retro collection planned. After the commercial failure of Sonic Boom, this would be a low risk and low cost prospect to help make up losses. As youâ€™ve no doubt gathered, weâ€™re speculating here.

Weâ€™ll probably see a few movie and cartoon tie-ins from Little Orbit too, who have been quick to both spot and fill a gap within the childrenâ€™s market.

As disheartening as this lack of support sounds, thereâ€™s a very good reason not to worry. Nintendo hasnâ€™t sat back and twiddled thumbs while the release schedule thins. Theyâ€™ve hunkered down to ready enough titles to support the Wii U single-handedly.

Delays notwithstanding this year will see seven major releases, in addition to smaller titles such Mario vs. Donkey Kong, Mario Party 10, Art Academy and Devilâ€™s Third.

After a drawn out spell in development limbo – and an almost disastrous E3 showing – we do fear the worst for Devilâ€™s Third. If anybody can turn a project with such a rough history around though, itâ€™s Nintendo.

With a release date penned for February in the US, Kirby and the Rainbow Paintbrush looks set to be the first out of the door. In a somewhat predictable fashion, release dates for Nintendoâ€™s other big name titles are still unknown. Yoshi’s Woolly World and Mario Party 10 are likely to follow behind Kirby in the coming months, with the anticipated RPG Xenoblade Chronicles X, the exceedingly colourful Splatoon and level creation tool Mario Maker making their way in the summer. This leaves us with a double whammy of Star Fox and Zelda to end the year on a high.

Expect surprises too. Captain Toad: Treasure Tracker was announced at E3 2014 and released in December, so who knows what else Nintendo has in the pipeline – weak pun not intended.

On top of all this, weâ€™re still yet to discover what has become of Project Giant Robot and Project Guard. If your memory needs a jog, these two were demoed at E3 – the first a robot brawler, the second a tower-defence game. Some elements from Project Giant Robot may have worked their way into Star Fox as both use the GamePad for a cockpit view. Again, we can only speculate. 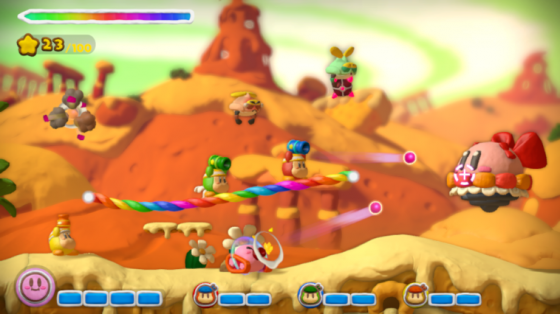 Nintendo also has the luxury of a steady slew of eShop indie titles to fall back on during the quiet months. Theyâ€™ve already shown a keenness to sniff out and promote key indie titles, either via Nintendo Direct show reels or on the eShop itself. The end of the year could also see the release of a Wii U classics range formed of Pikmin 3, NSMB U and other early software. With confirmations of Nintendo already planning their next console, a budget range is bound to appear at some stage. If not this year, then next.

Weâ€™d go as far as saying that weâ€™re more concerned about the 3DS line-up over that belonging to the Wii U. The Legend of Zelda: Majora’s Mask 3D, Code Name: S.T.E.A.M. and Monster Hunter 4 Ultimate are the only standouts at present. With the revamped 3DS nearing release in Europe, Nintendo will need more than a trio of titles to turn heads and open wallets.