Christmas issues of gaming magazines are usually packed to the rafters with reviews. Featuring just nine games – four of which were tiresome sporting sims – this wasn’t quite the case for the November 1998 issue of N64 Magazine. Considering The Legend of Zelda: Ocarina of Time was amongst the other five games though, it’s doubtful that N64 owners were concerned about their Christmas being a moderately quiet one.

A decision was made to make the Ocarina of Time review a two-parter, the reason being that Nintendo chose not to send advance copies to the press. Instead, journalists were invited to spend a day playing the game – and taking screenshots – at Nintendo’s European HQ. Sixteen years later, this is something that still occurs within the gaming industry. Anti-piracy measures, apparently.

Legendary scribe and illustrator Wil Overton was the individual lucky enough to spend a day with Link’s first foray into 3D. To quote the magazine’s editorial page: “He came back beaming a smile we haven’t seen since he first got hold of a copy of Super Mario 64.”

The first part of the review was a spectacular eight pager, detailing the sights of Ocarina’s early locations including Kokiri Forest, Lon Lon Ranch, Hyrule Castle and of course the small but perfectly formed Deku Tree dungeon. “Zelda is pretty much everything you thought it would be. And, dare we say it, probably a bit more as well,” claimed Wil. “In the day we played it, we didn’t find anything in Zelda that could seriously be called a problem. If anyone doesn’t like this game, then it’s video games as a whole they don’t like, not Zelda,” he continued.

Although no score was given (it went on to receive 98% in the next issue, for those curious) the review concluded with some wise words. “If you’re only going to buy one game for Christmas [though], we’ve got no doubt that it should be this one”.

To be fair, F-Zero X, Space Station Silicon Valley – both released a month prior – and Turok 2: Seeds of Evil aside, N64 owners didn’t really have that many major new releases to choose from. Turok 2 had a critical eye cast over it back in October, but as it was hit by a delay due to Iguana struggling to cram it onto a 256MB cart, an updated review was provided. Acclaim’s dinosaur hunting sequel walked away with a lofty 95%, with the visuals awarded a perfect 10/10. “The triceratops-riding is worth the admission price alone,” they flaunted. 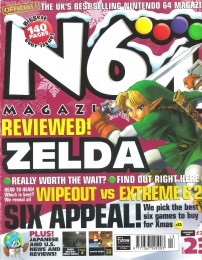 Two of the aforementioned sports sims were Madden NFL 99 and NFL Quarterback Club, which went head-to-head with one another. “QBC looks so much better than Madden you’d think the games were running on different consoles,” read the joint review, which weighed up the pros and cons of each.

Despite similarities, WipEout 64 and Extreme G 2 weren’t put up against each other in the same manner. Although both were given the elusive ‘Star Game’ award, WipeOut 64 ultimately came out on top. It was a very close call however – WipEout received 88% while XG2 – as the cool kids called it – gained 85%. In the breakdown WipEout received 10/10 for sound – “An absolutely storming soundtrack which is clear as bell.”

Would you believe a third futuristic racer was reviewed in the same issue? That game was Ubisoft’s SCARS. “If ever there was a time not to release a futuristic racing game, then that time is surely now,” began the review, taking into considering that F-Zero X had only just been released too. Although SCARS wasn’t a bad game (it received 79%) comparisons with the aforementioned racers were unfavourable.

Going back to annual sporting updates for a moment, NASCAR 99 had a single page spared to it. “You start a race and, by the time you finish, you’re 50 years old, with three kids and a semi-detached in Welwyn Garden City.” 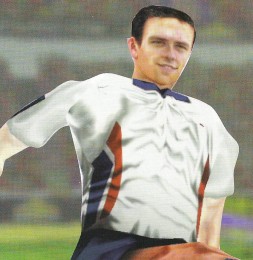 The final two games reviewed were Konami’s disappointing RPG Holy Magical Century (71%) – which had a lead character called Brian, we kid you not – and Japanese import Let’s Smash (67%), the console’s first tennis game.

Being an end of year issue and all, the six-strong team each chose their six top titles of the year. This tied in nicely with the fact that this Christmas issue came with a cart rack able to contain as many games. “You’ve got your free N64 game rack – all you need now is six brand new Christmas games to store in it,” began the feature, quite possibly forgetting that the majority of N64 titles were £60 each.

With the console only two years young at the time, a fair few games were unsurprisingly mentioned more than once. Turok 2, Silicon Valley, Body Harvest, 1080 Snowboarding and F-Zero X appeared in almost every writer’s list. Often forgotten 2D fighter Rakuga Kids did however receive an honourable mention as did Glover, albeit alongside fellow close contenders NFL Blitz and WWF Warzone. 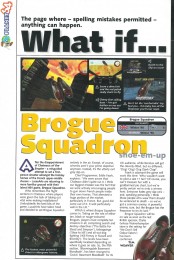 Issue 23 ended with a one of the magazine’s regular ‘What if…’ scenarios, detailing an imaginary game fabricated from the team’s warped mind. This month: the ‘shoe’em up’ Brogue Squadron, featuring several Star Wars: Rogue Squadron screenshots with Tie-Fighters and X-Wings replaced with shiny brown shoes. Missions would include “The Battle for Stead and Simpson” and “Bloomingdale Basement Bloodbath”… which allegedly was to be changed to “Dolcis’ Basement Bloodbath” for the game’s UK release.

Amusingly, when Beatles Adventure Racing (Beetle Adventure Racing with musical instruments and a presumably Liverpudlian vibe) appeared in the same section a few months later, the magazine received numerous letters asking where it could be purchased from. Further teasing could have potentially ensued with Penny Lane Racers.