A year has passed since Adventure Time: Explore the Dungeonâ€¦ was released yet we’re still dumbfounded as to how WayForward managed to create something so joyless. A harsh and gruelling slog, those who had patience to see it through to the end genuinely have our respect.

Whereas â€˜Explore the Dungeonâ€™ took influence from good old Gauntlet, this third Adventure Time tie-in takes inspiration from the 16-bit classic Zelda: A Link to the Past. The Zelda template not only suits the license like a glove but also gives it a wider appeal than some may expect.

It helps, of course, that it’s a very competent Zelda alike – WayForward are clearly well versed with Linkâ€™s top-down adventures, including what makes them just as compelling as one of Nintendoâ€™s fully fledged fairy-filled outings. Itâ€™s a somewhat shorter experience than the majority of Zelda games, which is mostly down to a far smaller – and less varied – world map but even so the 10-12 hour runtime is nothing for WayForward to be ashamed of. 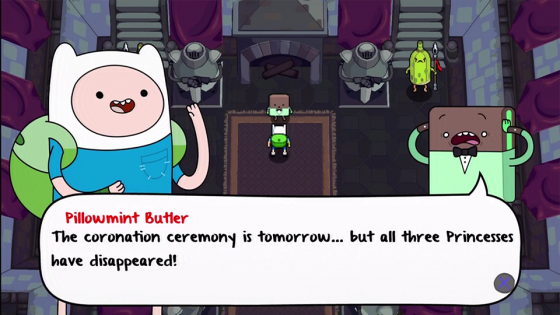 The plot sees Finn and Jake out to find three princesses who have mysteriously vanished inside the Nameless Kingdom. Although set in a realm unique to this tie-in, appearances from key characters are frequent. One unexpected element given the (presumably) low budget is that all character dialogue is backed by a voice over. Some vocal talent is seemingly provided by sound-alikes (Tree Trunks doesn’t sound quite right) but when combined with dialogue that remains true to the showâ€™s peculiar nature the overall presentation is solid enough. Some artwork has clearly been lifted from previous Adventure Time games but regardless the 2D sprites are nicely drawn and well animated.

Music impresses too. The upbeat main world music adds a jaunty vibe to the proceedings while the sombre tones that play during dungeon quests create a surprisingly eerie atmosphere.

Itâ€™s within the four dungeons that the majority of time is spent. For those unfamiliar with Adventure Time, the world of â€˜Oooâ€™ is in fact a post-apocalyptic iteration of Earth. Following suit, the dungeons are in pre-apocalyptic structures including a school that clearly favours the musical arts and an elaborate swimming pool that features puzzles based on rising and lowering water levels. A 2D version of Ocarinaâ€™s notorious Water Temple, if you will. 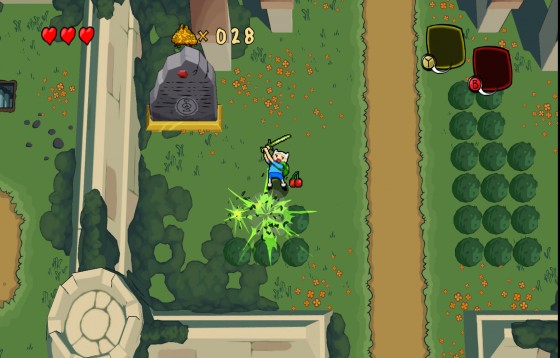 Itâ€™s fair to say the assumption is made that most will have played a Zelda game beforehand as the dungeon basics are never explained. In fact, for something thatâ€™s intended for younger gamers thereâ€™s very little hand holding or signposting, proverbial or otherwise. The world map simply shows which dungeon to head to next, leaving you to then figure out whatâ€™s required to gain access. To enter the first dungeon, for instance, a plastic bag is needed – the gameâ€™s equivalent of Linkâ€™s glass bottles. Four â€˜baggiesâ€™ can be found and carried in total, each gained in a different way. Not only do they allow a supply of vitality boosting trail mix to be carried but also wall-destroying dynamite. Now thatâ€™s canâ€™t be safe.

The bulk of development time has clearly been spent designing the dungeons as their layouts are surprisingly complex. Puzzles soon begin to span multiple rooms, and most dungeons feature a large centre piece puzzle that can take a considerable amount of time to complete, even if the solution is obvious.

Notepads and pencils (read: maps and compasses) are always found in chests early on in, highlighting the locations of other chests, locked doors and the boss key. Once found progression is then relatively straightforward, and around halfway into a dungeon a teleport opens up to prevent any potentially tedious backtracking. Sadly though an irritating loading screen occurs when using it, spoiling the flow somewhat. 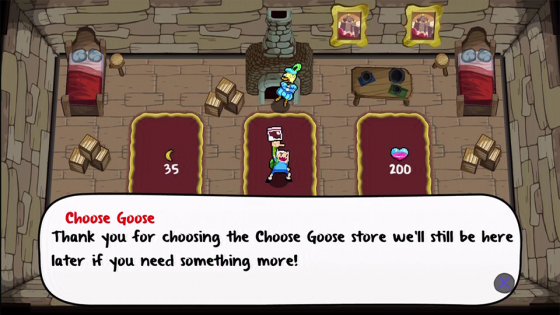 The bosses contained in the dungeons display further ingenuity. Predictably easy first battle aside, they can take a good number of attempts to defeat. Their attack patterns and weaknesses are entertaining to learn and discover, and never do battles feel unfair.

The final boss in particular puts up a very good fight, providing a decent reason to go hunting for heart pieces and finish off the optional quests. These include an on-going item swap quest similar to that found in Zelda: Linkâ€™s Awakening – fans will instantly recognise the objects that have to be swapped between the showâ€™s cast. Secret achievements provide another diversion with many linked to doing daft things. Spending fifteen minutes inside the Party Bearâ€™s rave cave is one fine example; trying to trap a fairy in a plastic bag another. WayForward has managed to tap into the cartoon’s warped sense of humour – there’s no debating that.

It’s touches like the above that help ‘The Secret of the Nameless Kingdom’ feel as if itâ€™s paying homage to Zelda rather than shamelessly ripping it off. Usually weâ€™re against plagiarism, but we found no grounds for that here. Amazing, really, considering how just many ideas it borrows.