Digital versions of ancient Activision titles, a couple of obscure Virtual Console re-releases and another handful of 3DS themes. If you’re finding it hard to get excited about this week’s eShop schedule then you’re not alone. 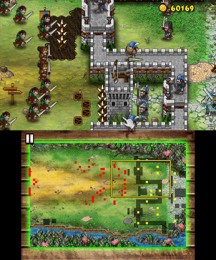 We can’t muster much enthusiasm for Activision’s incredibly belated downloads either. Transformers Prime and Angry Birds Trilogy arrive on both Wii U and 3DS eShops this Thursday while Moshi Monster: Moshlings Theme Park makes its way to 3DS. Despite knocking on a bit (Transformers Prime was a Wii U launch title, if memory serves) they’re being launched at full price – £39.99 for the aforementioned, no less. Oh, Activision.

As for new stuff, there’s Enjoy Up’s 99Moves on Wii U. The garishly coloured retro shooter is available for a mere £1.37 to those who already own 99 Seconds, Abyss, Darts Up, Rock Zombie or Unepic. £2.49 otherwise.

The Wii U also get an Art of Balance demo this Thursday. With a Metacritic of 83%, you should certainly give this addictive puzzler a try.

On 3DS meanwhile there’s a conversion of mobile puzzler Sumico (£2.69), which launches alongside Toys vs Monsters (£1.99 until 31st Dec).

Although developer Enjoy Up has released various trailers for Toys vs Monsters, we’re still none the wiser as to what it actually is. The press release simply mentions the ability to “build a squadron of toys and wage an all-out war on the evil monsters” but goes into no further detail. Oh well. That’s being join by medieval castle defence game Castle Conqueror Defender (£3.99) and a Glory Of Generals demo.

At least the new 3DS themes sound faintly amusing – Mario’s Mighty Moustache and Luigi’s Mighty Moustache themes both give the ability to prompt Mario and Luigi to fiddle with their ‘staches. Tomodachi Life and MGS: Snake Eater themes are incoming too at £1.79 each.