WayForward’s take on the Turtles franchise surprised us for a couple of reasons. Firstly, it isn’t a wscrolling brawler – the genre that pretty much every TMNT game in the past has favoured. Instead it takes the form of side-scrolling ‘Metroidvania’ adventure that has obviously been designed with speedruns in mind. Secondly, it’s surprisingly good. Not ground-breaking, or genre-defining, but certainly pleasing enough. We’d even go as far as saying that it’s better than it needs to be.

That’s not to say that it doesn’t have shortcomings. And to be brutally honest, it does have more than its fair share. Thankfully they’re the kind of problems that are easy to look past, especially when taking the £20 price-tag into account. The visuals are the biggest offender – it’s rougher than sandpaper. Character models during the cut-scenes aren’t too eye offending, but there’s still little reason to doubt that the original Xbox could have pulled this off without breaking a sweat. Collision detection is another issue. Not so much during combat, but notably so when leaping onto platforms and such. Once the double-jump move has been gained however this problem pretty much rectifies itself. 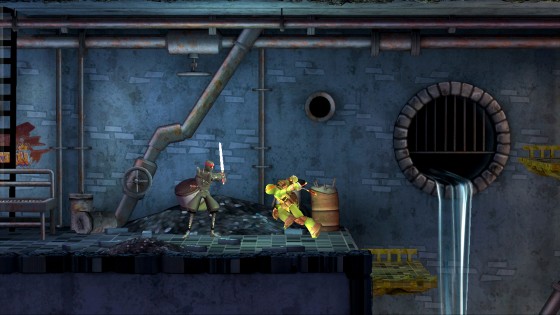 The plot also feels the wrath of a stunted budget, but it does at least allow for appearances from numerous characters from Nickelodeon series, including boss battles. Pleasingly retro boss battles, at that. Speaking of which, music during said fights will definitely ring a bell with those familiar with TMNT games of yore. Much later on there’s a subtle nod to Castlevania IV as well. Anyway, we digress – the plot sees Shredder teaming up with a creature from Dimension X to create a mutagen potent enough to power a weapon of mass destruction.

proof that a little fan service can go a long way

One nice touch is that extra lines of dialogue are unlocked by beginning boss battles and meeting NPCs when playing as a certain Turtle. Outside of cutscenes the Turtles refrain from cracking wise every few seconds, instead opting to use their power of speech sparingly. For those not aware, the speech samples in the last TMNT game – which we gave a miserable 2/10 – were so repetitive that they grew tiresome as soon as the second level. So WayForward gets a pat on the back there.

All four hard shelled heroes are playable and can be swapped between with the push of a button. Their upgradable ‘shell kicker’ combos vary – with Raphael throwing a few painful looking headbutts into the mix – but other than this they’re much of a muchness.

It’s crucial to swap between Turtles when they’re low on health because if they’re drained completely they become imprisoned at a random location. Oddly, this includes prisons in areas that are currently inaccessible, either due to not being discovered yet or requiring a certain upgrade to reach. We quickly learnt that when down to the last Turtle it’s far quicker to reload the last save then to go freeing the captured heroes. Save points – which take the form of meditation rooms – fortunately aren’t too far apart. They also update the map screen with new data, including icons indicating where to head next. 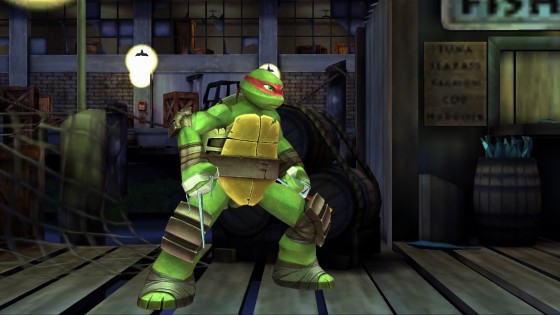 Being a ‘Metroidvania’ progression isn’t naturally straightforward. Upgrades that allow access to new areas are sometimes hidden well, prompting a degree of backtracking and a thorough search to find. It’s quite easy to go off the beaten path and end up in an area that you’re not supposed to visit yet, with the sewers in particular being very labyrinth-like in design. Most areas contain a gate or two that can’t be opened until much later on, and so revisiting these areas towards the end of the game is vital for those who want to collect all shuriken and health bar upgrades. For the record, we managed to defeat the final boss with three heath bar extensions still to find.

It’s a shame that there’s no Wii U version as an off-screen map would have been a blessing. Having to frequently bring up the menu to get a good look at the map did put the proverbial brakes on the otherwise fast pace. It’s because of this that we’d wager that the 3DS version is the one to go for. Another moot point is that this may be a little too tricky for younger gamers. That said, it does have a 12+ age rating – we’re sure anybody around this age can get their head around how ‘Metroidvanias’ are structured. 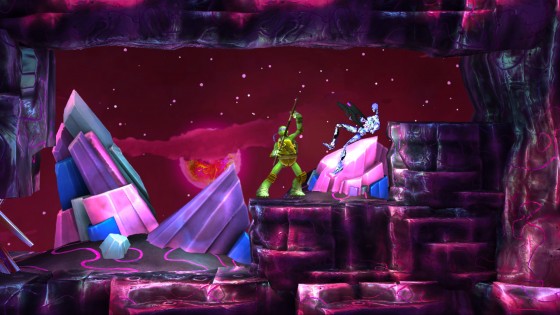 Indeed, structure is the key here – areas are interconnected, taking the Turtles above and below New York’s gritty streets. Because the locations are easily distinguishable from one another it doesn’t take long to get accustomed to the surroundings and thus learn how to exploit their shortcuts. As mentioned in the opening paragraph, WayFoward has designed this adventure with speedruns in mind. Achievements can be had for beating it within 4 hours, 2.5 hours and in under an hour. Our first playthrough, somewhat unfortunately, stood at 4:18. Despite some clear shortcomings it’s an enjoyable enough experience for us to want to try and beat that time in the future.

Danger of the Ooze is proof that a little fan service can go a long way, helping here to cover the cracks caused by a distinctly limited budget. Once the dust has settled on this season’s AAA releases, those wanting to revisit their childhood should bear this adventure in mind. Michael Bay withstanding, the Turtles really haven’t changed much over the years. The games they star in, however, are finally starting to evolve.