The suffering of sheep continues in this fourth instalment of Activisionâ€™s money making franchise. In fact, the first creature youâ€™re shown how to trap – using the new portal and a ‘Traptanium’ crystal – is of the woolly variety. This monumental mammal is far from innocent however. Going by the name of Sheep Creep, theyâ€™re an escapee of a recent break-in at Cloudcracker Prison.

Focusing on a ragtag bunch known as the Doom Raiders, the plot entails rounding up and capturing these vulgar villains. Most missions involve locating their whereabouts before putting an end to their plans, initially masterminded by pint-sized pest Kaos.

Once beaten in battle they can be caught in a crystal trap and â€˜tagged in’ at the push of a button. Keeping the focus squarely on the Skylanders, new recruits to your justly cause can only be used for a short amount of time. Their attacks are somewhat limited as well, restricted to just one or two moves each. 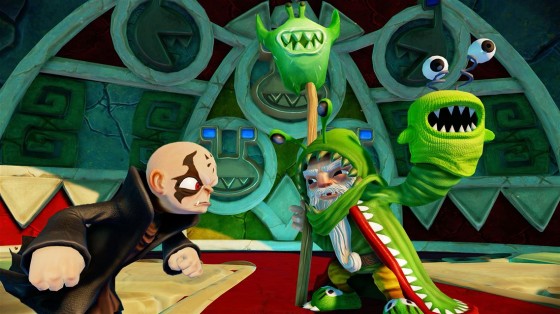 Crystal traps hold a maximum of two villains. Somewhat cheekily, they also have to be of the same element as the enemy youâ€™re about to capture. The first few trappable villains – who can be later persuaded to change their wicked ways via mildly amusing â€˜redemptionâ€™ side-quests – can be caught using the water and life traps provided in the starter set. Potential turncoats of said elements then start becoming scarce as early as the third chapter. In other words: cough up cash for additional traps or miss out.

At around Â£6 for whatâ€™s essentially just a small piece of transparent plastic, the traps certainly arenâ€™t cheap. Had they been nearer the Â£2 mark – just like Disney Infinityâ€™s pocket-money priced Power Discs – we could live with fact that you need to buy at least one of each element to catch ’em all (to coin a phrase) but at a cost that almost matches the figures themselves it’s hard not to think that Activision are getting a little greedy. 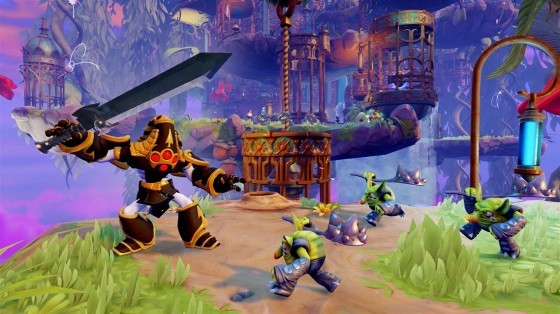 Itâ€™s a bit of a blow, really, as the new portal adds a lot to the experience. Build quality is vastly improved, and it now includes a built-in speaker that provides the former villains with the power of speech. This prompts some amusing dialogue while they complain about cramped conditions and whatnot. Save perhaps for Broccoli Guy – whoâ€™s quite literally just a piece of broccoli carrying a magic wand – the character design is mostly decent too. We wouldnâ€™t be surprised at all to discover that most of the villains were once destined to become plastic figurines. Speaking of which, two are included in the starter pack – trap masters Snap Shot and Food Fight.

reasons to dust off older heroes are rather few

Whereas any Skylander could open their respective elemental life gate before, now only the premium-priced trap masters can. If that sounds like a bit of a kick in the teeth (well, wallet) thatâ€™s because it is. Over the years weâ€™ve managed to amass a small army of Skylanders, pretty much all of which went unused when playing Trap Team. They arenâ€™t useless per say – as always we approve of the fact that all Skylanders are backwards compatible – but reasons to dust off older heroes are rather few. It doesnâ€™t help that Snap Shot has some vastly overpowered attacks, including a whirlpool that can drain even a larger enemyâ€™s health bar in a jiffy. In past Skylander games we usually used a few characters per stage, but here our faithful Snap Shot made it through entire chapters unscathed. A surprising lack of enemy encounters, especially during early missions, is another confounding factor for an easier difficulty level than before. 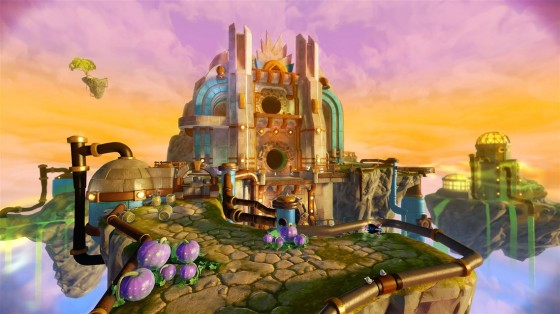 At least the new tower-defence â€˜Kaos Modeâ€™ puts Skylanders old and new to good use. Here waves of enemies attempt to break open a box filled with loot. Deployable turrets – each of which have elemental attacks, thus requiring a Skylander of that power to set-up – help to prevent Kaosâ€™ minions from overrunning the battle arenas. Due to Kaos popping up between waves to taunt and make fun the pace is a little slow and sluggish, but itâ€™s still an engaging enough addition and one that helps to add further replay value once the story mode has been beaten.

Improvements are just as notable in other areas. The main hub – the Skylanders Academy – in particular is arguably the best yet. This large castle-like structure has new areas added to it frequently, and its here that powers can be upgraded and Brockâ€™s battle arenas accessed. Itâ€™s also possible to check the Villain Vault in order to see what bounties are still out there to bag. 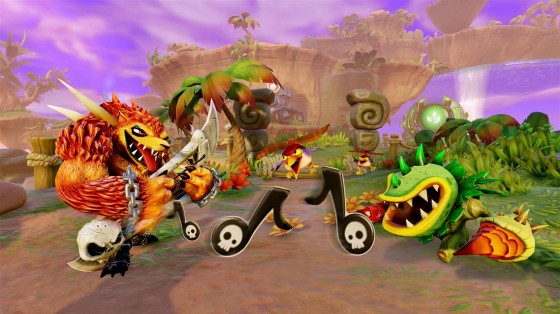 During missions puzzles are slightly more predominant than before, with the sliding puzzles that occur when opening gateways to new areas now two-player. The new Skystones Smash mini-game – with its own collectable battle cards – is only single-player however, so any friend brought along for the ride simply has to wait patiently while you play this pleasingly simplistic card battler. Fortunately itâ€™s not often that it has to be played in order to progress. Another advancement is the gameâ€™s length – 18 chapters in total, taking approximately an hour each to fully explore. Although the storyline is dragged out to a degree itâ€™s doubtful that younger gamers will notice and though the missions are very cutscene heavy they do still serve purpose, explaining what to do and where to go next. Thereâ€™s no worry whatsoever of young players getting lost, stuck and ultimately frustrated.

So itâ€™s one step forwards and one step backwards for Skylanders this year. The new portal is an inventive addition, and although the method of trapping villains is simplistic to the extreme (weâ€™re sure children could have mastered something slightly more complex – even QTE scenes would have livened things up) itâ€™s still the most entertaining gimmick yet. Unfortunately for parents, itâ€™s also the most costly.