When Insomniac began pitching Sunset Overdrive to publishers they took along a bag containing various comic books, DVDs, toys, masks and other bits and pieces to help illustrate the kind of vibe they wanted it to have. Noticing some heavy rock â€˜nâ€™ roll influences inside their bag of goodies, publishers feared that the studio wanted to make something similar to the critically acclaimed but commercially disastrous Brutal Legend. It wasnâ€™t until pitching the project in a more usual manner – by showing off the gameplay mechanics – that Microsoft gave Insomniac the go ahead.

While the former developer of the Spyro and Resistance franchises may have learned the hard way how not to pitch a new title, their peculiar pitch did highlight just how keen they were to fulfil a vision. This is something that theyâ€™ve always wanted to make, and after the whole EA/Fuse fiasco being able to flex their creative talent once again must have felt tremendous. 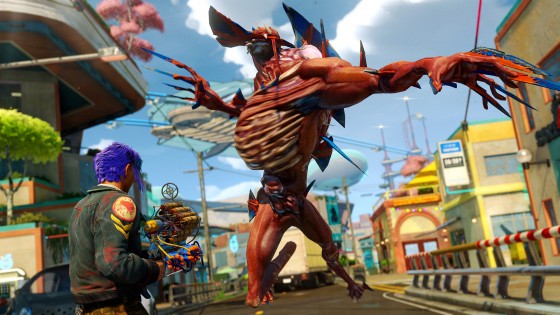 Going back to their original pitch for a moment, Sunset Overdrive does understandably draw from a lot of influences. Itâ€™s the lovechild of Jet Set Radio and Dead Rising, pretty much – a colourful, vibrant world filled with rails and ramps to grind on while countless enemies rampage the streets below. Youâ€™ll find no zombies here though – itâ€™s an energy drink known as Over Charge that has caused Sunset City to erupt with orange-skinned mutants. The opening sequence takes place during the catastrophic launch of said product, and itâ€™s here that weâ€™re introduced to the unlikely protagonist. He (or she, if you prefer) is a nobody, but this impending apocalypse has given them a sense of purpose – to become a hero.

Rather than see the apocalypse as the end, they see it as a beginning – a clean slate, and a chance to reinvent themselves. This is where the customisation options come into play, allowing you to kit out your character in all sorts of attire. Want to run around in a floral skirt while wearing a pair of fluffy leg warmers? No problem – there are no gender boundaries here. Customisation options extend to weapon upgrades, known as Overdrives and Amps. Both are intended to compliment your style of play, improving firepower by adding elemental or explosive properties or making it easier to get around the city with style. 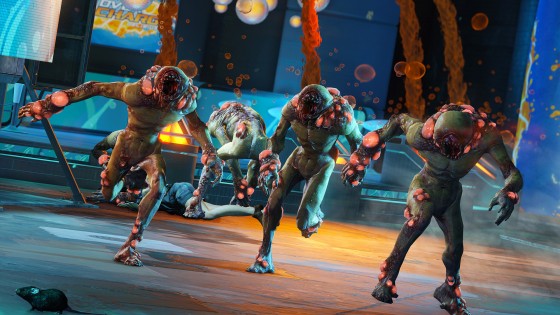 Building combos by wall running, grinding, skimming across water and bouncing off obstacles fills a â€˜style meterâ€™ which once full supplements attacks with electric storms, fireballs and waves of glowing energy depending on which Amps are equipped. These are gained by completing tower-defence battles, during which itâ€™s possible to place home-made traps. As the story progresses new areas unlock, increasing the amount of objects that require protecting from waves of enemies. As only four traps can be taken into battle, it’s worth mulling over which ones to take along. Overdrives meanwhile boost the amount of ammo per weapon type (which vary from automatic, single-shot and deployable), extend the health bar and increase damage ratios. These handy upgrades are unlocked by earning badges, awarded on the fly for proficient grinding and killing.

Grinding rails isnâ€™t just essential for getting around quickly. Itâ€™s downright essential for survival too. Mutants quickly swarm on your location, flinging projectiles and draining your health bar in a flash. In the words of S-Club 7, donâ€™t stop movinâ€™. Thankfully just about every object that can be leapt on, be it cars or trees, propels our hero up high. It also helps that the controls are responsive to the extreme, while the outlandish weapons have huge damage radiuses and overly generous auto-aiming. Thereâ€™s no call for fine tuning shots here; just hold the trigger down and let rip. 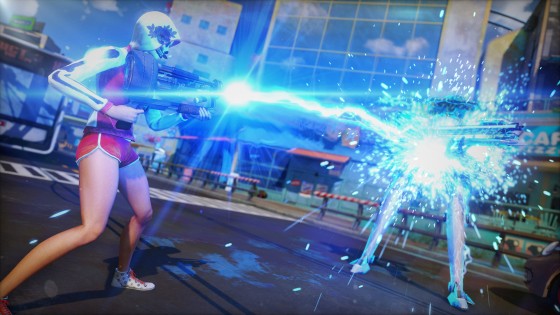 Changing weapons regularly is equally vital for survival. Not just because ammo depletes quickly but because some enemies are susceptible to different types of firepower. Flame rounds cause considerable harm to mutants – and as such we favoured fire-based weapons – while the robotic enemies are swiftly weakened by electrical bolts. Weapons level up through use, gaining extra ammo reserves and improved firepower. Itâ€™s a neat little set-up, adding to the sense of progression nicely.

The story unfolds at a brisk pace, with the likeable lead in charge of rounding-up other survivors and anybody else who can assist in escaping Sunset City. Fizzco – the creator of Over Charge – are rather keen to keep their fubar under wraps, and that meant shutting the city off from the outside world and deploying robotic patrols.

Playing heavily on stereotypes, one of the first survivors you meet is a redneck gun nut. Fortunately survivor factions encountered later on display a touch more originality, including a troop of scouts who have barricaded themselves inside an oriental museum and put the exhibits inside to good uses. There are also live action role-players who take their hobby far too seriously, as well as a group of posh university snobs who have holed up in garishly coloured indoor playground. Boss battles too show similar levels of creativity, often causing you to traverse the sizeable city’s rooftops while whittling their health bar down. 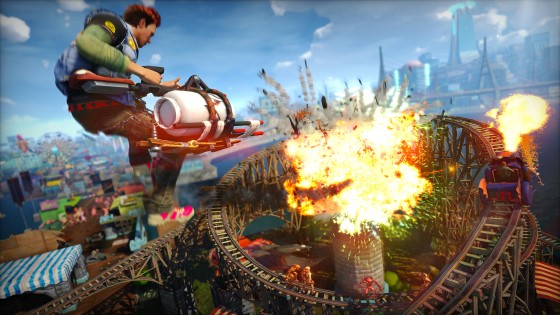 In most instances fellow survivors request you run an errand or two before aiding your cause. Towards the end of the game it even becomes something of an in-joke that everybody you meet is in urgent need of a favour. Indeed, Sunset Overdrive is incredibly self-aware, right to the point where the hero often refers to the fact that theyâ€™re the star of a videogame. Social sites such as NeoGAF and Reddit are referenced a couple of times too. Such attempts at humour donâ€™t always hit the mark; much like a Pepsi Max advert from the â€˜90s, Insomniac does come across as trying too hard to be cool.

like a Pepsi Max advert from the â€˜90s, Insomniac does come across as trying too hard to be cool

They have at least managed to leave a lasting impression by different means. The amount of colour and energy on display even puts some of Nintendo’s efforts to shame. The firework-based weapons in particular emit dazzling effects, and the frame rate copes with the carnage effortlessly.

However, those who choose to stick to the main story missions will soon discover that the carnage comes to an end surprisingly quickly. Weâ€™re talking after just a few evenings of play here. The smooth difficulty level may keep frustration low, but it’s also a confounding factor to the gameâ€™s overall shortness. Aside from the tower-defence sections, penalties for failure are pretty minimal. Thankfully optional side-missions are well worth undertaking, including a mock RPG quest provided by one of the role-players. There are both score and time-based challenges to try and beat too, along with an unprecedented amount of collectables to find.

Rounding-up collectables isn’t the most stimulating of endeavours, we know, so itâ€™s a good job that the multi-player Chaos Squad mode doesnâ€™t feel like a tacked on extra. This mode opens up after a few hours of play, accessible only by using phone booths found in the city. Although this co-op mode has a focus on working as a team to beat target scores thereâ€™s still an underhand competitive element present. Screen time is given to those first to reach new objectives, while leaderboards show whoâ€™s pulling their weight and who isnâ€™t. 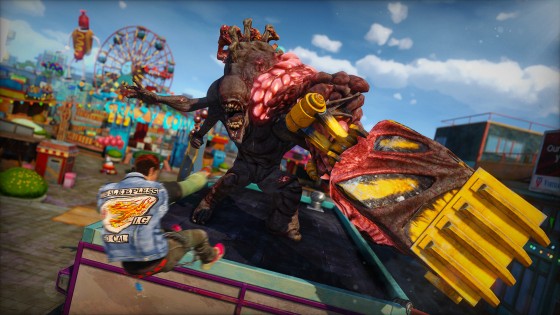 Also between missions thereâ€™s the chance to vote on which task to take on next, which vary from destroying a Fizzco blimp to hacking generators while fighting off swarms of mutants and armour-coated gang members. Meeting bonus objectives boosts your personal score and also increases the amount of energy available for traps deployed in the final tower-defence battle. The high-end target scores require heavily upgraded firepower to obtain so rest assured that you wonâ€™t beating every Chaos Squad challenge on your first attempt.

Bearing all the hallmarks of Insomniacsâ€™ finest, Sunset Overdrive is instantly likeable and the tale of this being the game they’ve always wanted to create makes it even easier to admire. When youâ€™re faced with yet another fetch quest however you have to wonder if they were given enough time to fully achieve their vision. The quests are creative, mostly, but even so some subtlety wouldnâ€™t have gone amiss.

Sunset Overdrive is very much built the American way – bold and brash, and boy howdy it wants you to know it.