Auto-saving has made gaming considerably easier over the years. No longer do we have to remember to save progress every few minutes; if we die we simply go back to near where we left off, making the consequences of failure minimal at the most. Thatâ€™s not the case in Alien: Isolation. This deep space survival horror uses save stations that in some instances – at the start of the game, in particular – can be far apart.

This isnâ€™t down to lazy or bad design though. Itâ€™s actually the opposite – when the stakes are high youâ€™re more determined not to die, thus making the experience all the more tense. Our most chilling moment came when the Alien was stood right in front of a save station. With a good 15 to 20 minutes of play at stake we hid under a desk with baited breath and sweaty palms, hoping that it would give up trying to discover our location. It wasnâ€™t until it climbed back up into an air duct – its usual lurking place – that we breathed a deep sigh of relief, and finally reduced grip on the joypad. 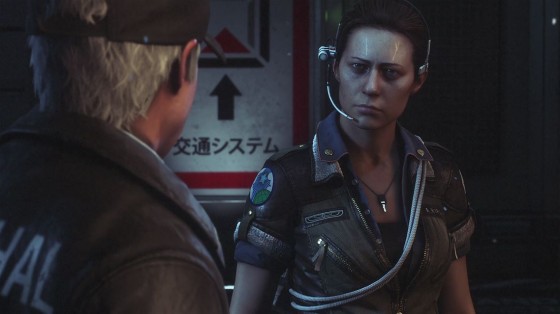 Especially in areas where enemies are numerous, failure comes at a high price. This does mean that Alien: Isolation isnâ€™t going to appease the typical first-person shooter crowd. Amanda Ripley – the pain-stricken daughter of Ellen Ripley – has new weapons added to the inventory frequently, but resorting to violence and bloodshed isnâ€™t always the answer. Amandaâ€™s battle with the Alien is one of wits and wagers, and also one where a smoke grenade rather than a shotgun can save your life. That said, the high amount of ammo on hand does prevent this being an altogether scarier experience than ZombiU.

Thereâ€™s always enough scrap around to construct medkits and other ordnances too. Having a full supply of medkits doesnâ€™t guarantee survival though. The Alien kills with one hit, and cannot be outrun. You can try, sure, but the noise of running away usually results in the Alienâ€™s spiked tail swiftly puncturing your chest. Thankfully an invaluable motion tracker is found early on, and remains useful throughout, while noises of the Alien rattling around in the air-vents above is an incredibly effective way to tell if danger is nearby. 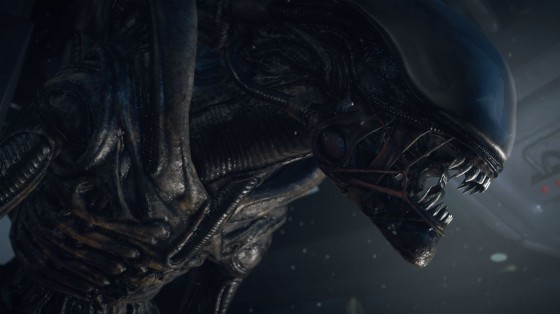 Sound draws the Alien out of the depths, including the use of firearms. The first time the Alien makes an appearance is a harrowing experience and one thatâ€™s likely to remain with gamers for a while to come. Way before the end of the game however we had become accustomed to the way it acts. It comes, you hide, and then it vanishes into the air ducts. There it sits, waiting for you to expose your location once again, accidentally or otherwise. The flamethrower is the best (and most satisfying) method of defence but even using this has a price to pay. The Alien doesnâ€™t take kindly to being set ablaze and will return even angrier.

attention to detail is impeccable throughout

The Alien isnâ€™t the only threat to contend with. Space station Sevastopol is in a state of emergency; something Amanda and her crew werenâ€™t aware of until boarding. As Amanda tries to make sense of the situation in hope of discovering what exactly happened to her mother, she has to deal with looters (also known as scavengers) that are so frightened of whatâ€™s out there that they shoot on sight. Itâ€™s up to you to make the moral decision to harm fellow humans, with achievement as a reward for remaining passive. Thereâ€™s no moral compass to take into account when it comes to malfunctioning synthetics though. Whereas scavengers use firearms against Amanda, the androids (officially called â€˜Working Joesâ€™) will grab, throw, punch and even attempt to strangle. They donâ€™t go down easy and even stunning them with a well placed EMP grenade or stun baton is a temporary solution. With their glowing red eyes and relentless nature theyâ€™re a highly unnerving adversary. 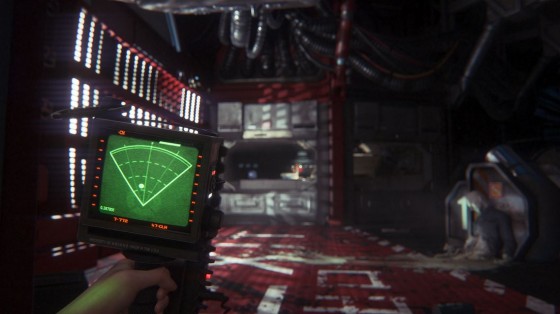 Theyâ€™re still far from being the biggest of Amandaâ€™s problems. With the Sevastopol in a constantly increasing state of chaos, electronic systems are either malfunctioning or destroyed completely. The majority of time isnâ€™t spent hiding from the Alien but rather rebooting systems, hacking devices via various mildly engaging mini-games, locating back-up generators and finding ID cards that open up new areas. Tools too are vital for progression, including a maintenance jack that opens locked doors – as well as acting at a melee weapon – and an upgradable blowtorch that can remove emergency panels.

Like EAâ€™s Dead Space, a shuttle service links areas together, and while there is some backtracking it’s rarely tedious. When revisiting previously explored areas chances are theyâ€™re in a worse state than you left them, or may now be cloaked in darkness. New tools may also give access to rooms that were inaccessible before, and itâ€™s usually in these locations that audio logs detailing the backstory can be found. 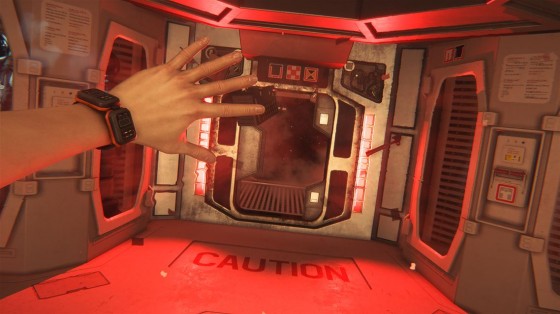 Moreover, the Sevastopol is fascinating to explore. Somewhere at Creative Assembly thereâ€™s a very well used Alien box set. From the glow of the bulky green-screened computer terminals to the bushy beards on the few friendly NPCs met, the attention to detail is impeccable throughout. To say that Ridley Scott fans will be in their element is an understatement. You could argue that a lot of the Sevastopolâ€™s corridors are near identical, but to do so would be foolish – itâ€™s a functional space station, not Ikea.

But while Sevastopolâ€™s locations are just about varied enough to keep interest levels up – taking Amanda through the medical ward, power reactor, shuttle terminals and more – her quest for sheer survival does lose steam around halfway. With 18 chapters lasting around an hour each, this is a surprisingly lengthy game. The first ten chapters are utterly compelling, but after the climatic and set-piece heavy 11th chapter what follows fails to match previous thrills. It could simply be the case that Creative Assembly felt that players deserved a break around the halfway mark, but regardless thereâ€™s still a bit of flab around the middle that could have easily been cut. The story then shifts for the remaining few chapters, but with the Alienâ€™s AI routines soon becoming predictable the gameâ€™s second half canâ€™t quite match the first. 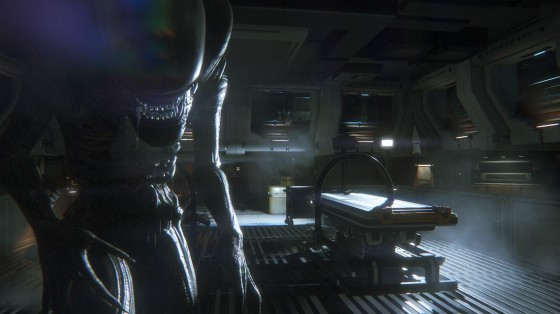 Presumably the gameâ€™s length can be attributed to the fact that thereâ€™s no multi-player. A survival mode does however give reason to return. Set in different scenarios, the clock is forever ticking and the score forever falling as you try to complete objectives and locate items while the Alien lurks in the shadows. The fact that there are no achievements linked to this mode does strikes us as a slightly odd decision, although a chance to appear on the online leaderboards provides incentive to better previous scores.

Alien: Isolation isnâ€™t the game that Aliens: Colonial Marines should have been. Itâ€™s something better – a tactful battle of brains over brawn. With ambition, love and dedication Creative Assembly has managed to create an experience that excels on all levels. After Amanda finally gains some long-awaited closure, you too will feel like a survivor.