Thinking of trading-in Titanfall towards one of the big name new releases? Hold your fire – Update 8 has just dropped. Instead of simply adding a few more Titan insignias and whatnot, it includes a very good reason to dust off your copy – a highly substantial four player co-op mode.

Frontier Defense sees yourself and three others fighting off waves of AI controlled enemies. Waves start off easy, with just a few grunt soldiers and robotic Spectres to fight off, but quickly escalate to the point where there can be a good half-a-dozen enemy Titans swarming towards the Harvester that requires protecting. Some Titans come packing nuclear threats while others can mortar bomb the Harvester from afar. As such, huddling around the Harvester doesnâ€™t guarantee success – the team needs to spread out while working together to take the Titans down.

Resulting in cheap deaths, the new ‘Suicide Spectres’ can be a pain, but setting off a chain reaction by killing a batch in close proximity can be rather satisfying too. 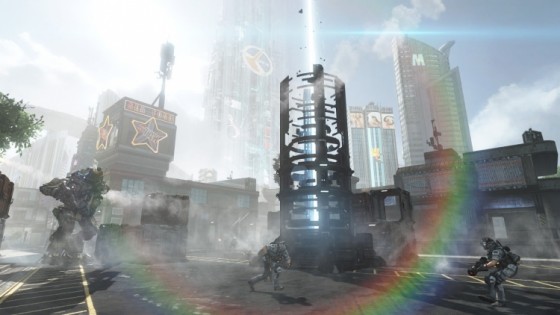 Dotted around the maps are ammo refill chests which is where loadouts can be changed in an instant. This, coupled with the ability to place gun turrets, gives Frontier Defence a slight tactical slant. The ever helpful battle narrator will sometimes comment on the proficient positioning of your turret – a nice little touch. We also approve of the ability to rain fire from the side of the dropship during respawn periods, all while getting a good view of the raging battlefield below.

New achievements (17 worth 400G), daily challenges and star-based rating mode – which now features in all modes, not just in Frontier Defense – additionally help to give Titanfall a new set of prosthetic legs.

But thatâ€™s not all – next month another two modes and being added. Marked for Death Pro is due 26th November while Deadly Ground comes next week (5th November). As the name suggests, touching the floor in this mode is fatal. The floor is lava (read: electrified fog).

Update 8 is available now for free. If youâ€™re really looking to get more out of Titanfall before the inevitable sequel is announced – which is heavily rumoured to be multi-format – at Â£6.60 (down from Â£19.99) the Season Pass is currently cheap too.

A last ditch attempt to draw back players before Call of Duty: Advanced Warfare launches? Probably, but thatâ€™s not grounds for criticism.