As a relatively new publisher on the scene – at least when compared to EA, Activision et al – Warner Bros don’t quite get the credit they deserve.

The LEGO games have improved massively while under their watchful eye, Mortal Kombat is the best it has ever been (save perhaps for that one time in the â€˜90s when pulling out a chapâ€™s spine was genuinely shocking) and Batman: Arkham Asylum and Arkham City are not just the best Batman games of all time, but two of the last generationâ€™s finest. Middle-Earth: Shadow of Mordor does for The Lord of the Rings what Arkham Asylum did for the Dark Knight.

Protagonist Talion is different to most on account of the fact heâ€™s already dead. Murdered during a grizzly blood sacrifice, the Aragon lookalike returns to the world as a Wraith – a ghostly entity denied from both heaven and hell. The fellow Wraith who resurrected Talion comes along for the open-world ride, in an attempt to remember, well, everything. It would seem that becoming a Wraith makes one quite forgetful. 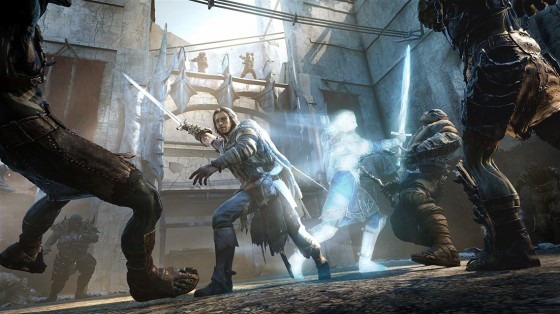 Usually we cast a wrinkly frown when a developer has blatantly copied something from another game. Monolithâ€™s decision to have Talion wall running and sneaking in the shadows in a highly similar manner to Ezio and other Assassinâ€™s Creed stars does however make a lot of sense. Developer Monolithâ€™s previous outputs have mostly been first-person shooters, including FEAR and Condemned, and so by studying ACâ€™s animation routines very carefully theyâ€™ve managed to provide Shadow of Mordor with a control system that arguably took Ubisoft years to perfect.

This also means that most gamers – with the AC games being as popular as they are – will take to running up walls, shuffling across ledges and leaping off buildings like a duck to water. Being a ghostly Wraith, Talion doesnâ€™t require a hay barrel to land into when jumping off towers and such – he simply slams into the ground in a manner that would make Iron Man jealous. Another benefit of being six foot under already (the plot is one of revenge, if you havenâ€™t guessed) is that Talion canâ€™t die. Instead, each failure passes time – Sauronâ€™s armies grow and shift, and as they do new missions and challenges not only open up but also change location. You may find that the Orc Captain that left you slain has relocated to a different stronghold, and as such is now surrounded by his peers. This provides the choice to try and take them all on at once, or simply wait until heâ€™s on his lonesome again. 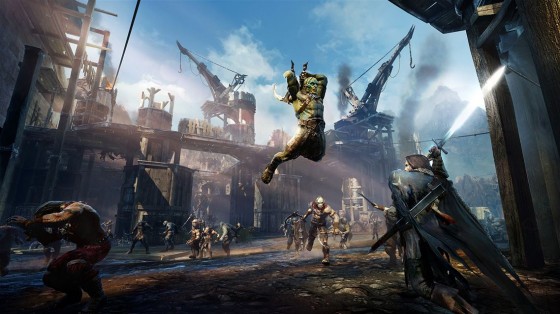 The combat system too has an inspiration, and this time one thatâ€™s closer to home. Namely, the Batman Arkham trilogy. When facing a large number of enemies the camera pans out to give a full view, with Talion automatically leaping from one target to the next in the blink of an eye. Countering is a simple case of hitting a button in good time, while as the story progresses new enemies are introduced that either have to be stunned before attacking or attacked from behind. Talion even borrows a few moves from Batman, such as performing a sweeping kick to knock an enemy off their feet before slamming them back to the round with a well-placed punch to the gut. Sadly thereâ€™s no chair throwing, but whereas Batman doesnâ€™t kill enemies, our hero here is more than happy to decapitate those in his path. This degree of ultra violence does actually serve a purpose – killing enemies in a brutal fashion can scare those nearby, causing them to flee like cowards.

While itâ€™s true that Shadow of Mordor has some clear sources of inspiration, it has its own merits too. The â€˜Nemesis Systemâ€™ is one fine example. Orc Captains roam Middle-Earth, each of which can be tracked and traced from the menu screen. Theyâ€™re boss characters, pretty much. Coated in strong armour theyâ€™re tough to defeat, sometimes even when you know their weaknesses. Every time a Captain defeats Talion they grow stronger and during the passage of time they move up the ranks to eventually become Warchiefs – even tougher adversaries. 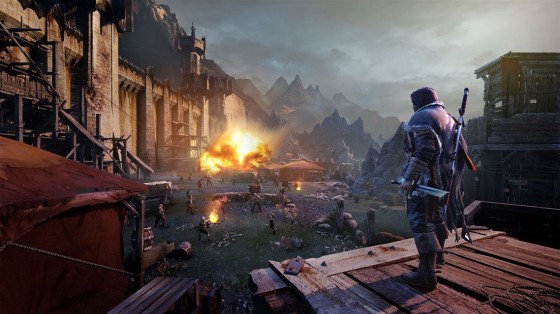 When taking on a Warchief itâ€™s advisable to track and kill their bodyguards first as taking on numerous army leaders at once often results in defeat. Believe us when we say that the only time youâ€™ll experience frustration here is if you go rushing into things. We experienced this briefly during the gameâ€™s first half, but after taking down the bodyguards first – who incidentally drop Rune Stones that improve Talionâ€™s trusty sword, bow and dagger – we soon emerged from our Warchief battles victorious. Stealth is another option too and handled well. Talion is able to lure enemies into shadowy areas for silent kills and can also launch surprise attacks from above. Enemy strongholds meanwhile often have bait hanging that can be dropped to lure captive Caragors out of their cages.

an hours’ worth of play can feel like fleeting minutes

Itâ€™s not Talion and his mysterious ghostly comrade that are the stars of the show. Nor is it Gollum, although his appearance is an undeniable highlight, mimicking the schizophrenic nature of his silver-screened counterpart perfectly. It is in fact Sauronâ€™s armies and their Captains that steal the limelight. The Uruks and Orcs bicker between their ranks, backstabbing one another for even the faintest chance of a promotion. Theyâ€™re motivated by greed and grog – the internal power struggles are fascinating and having to intervene executions where Uruks are slaughtering the weaker, green-skinned, Orcs is not an uncommon occurrence.

No creature is safe from Middle-Earthâ€™s wildlife however, and as you stroll the wastelands Sauronâ€™s armies have left in their wake youâ€™ll often observe enemy camps being attacked by Ghuls and other mythical beasts. In addition to the way that camping grounds move location, this is something that really helps make Middle-Earth feel alive. The same goes for the near-constant enemy chatter. They talk of taunting their human slaves, diminishing food supplies and their apparently useless Captains. Voice acting is superb throughout, especially that of Ratbag – a scrawny Orc that Talion hesitantly befriends – and also a rather arrogant dwarf hunter who helps to steer the gameâ€™s second half in a welcome different direction. 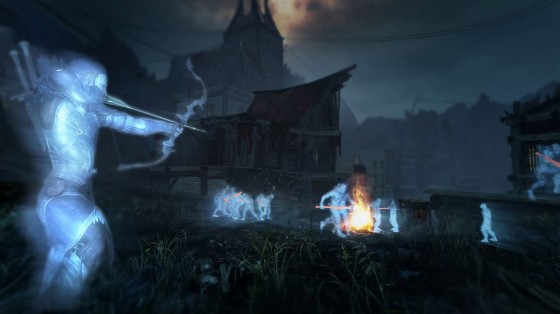 Random events arenâ€™t limited to the aforementioned executions. Far from it – the map screen is usually swamped with challenges, missions and the locations of collectable items. Tests of hunting and survival (in the foraging sense) meanwhile are completed on the fly. This is the type of game were an hours’ worth of play can feel like fleeting minutes, especially if youâ€™re motivated to hunt and kill the Orc Captains to seek revenge. We once felled several Captains in a row; the sensation was one of strength and superiority. Our reward was a far quieter battlefield, as if weâ€™d really made a dent in Sauronâ€™s plans.

Victory was short-lived, as there are always new recruits ready to step into the boots of those who have fallen. This can make Shadow of Mordor feel like a slog at times, as if youâ€™re getting nowhere fast. Optional challenges do however bestow extra XP which in turn helps to unlock new skills slightly quicker. Usually we shy away from optional missions but the ones here are both fun and inventive. Theyâ€™ve genuinely had some thought put into them and this is something that leads us to believe that the last few months of development have simply been spent polishing and refining every element so that everything fits perfectly, much like a custom made suit of armour.

In actual fact, thereâ€™s very little filler here and thatâ€™s despite the 25 hour plus runtime. This console generation may only just be underway but already Monolith are ones to watch.