Well, this weekâ€™s Nintendo eShop line-up is certainly far more interesting than the last few. Thereâ€™s Lone Survivor: The Director’s Cut on Wii U, some Hyrule Warriors DLC and another sizeable sale. This week also sees a double dose of Donkey Kong – throughout October Nintendo are releasing all three Donkey Kong Country and DK Land titles on Virtual Console as part of a â€˜Donkey Kong Country Weeksâ€™ promotion. 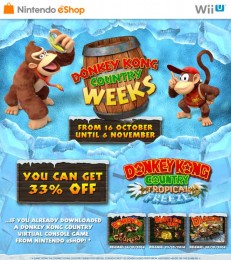 Here’s the dealio: buying any title in the promotion results in money off Donkey Kong Country: Tropical Freeze and Donkey Kong Country Returns 3D. The discounts are pleasing enough – the former on Wii U becomes Â£26.79 while the latter will cost Â£23.44 with the discount applied.

Another retro classic is due to arrive on 3DS Virtual Console this week too – puzzler Adventures of Lolo, at Â£3.59.

If youâ€™d rather play something shiny and new thereâ€™s Lone Survivor: The Director’s Cut from Curve Studios. To be fair though, itâ€™s not all that new – the PS Vita version released just over a year ago. The 2D survival horror went down exceptionally well when it arrived on Sonyâ€™s handheld, bagging 8.6 from IGN and an 8/10 from The Metro. There are no reviews of this Wii U version yet but expect it to fare similarly. 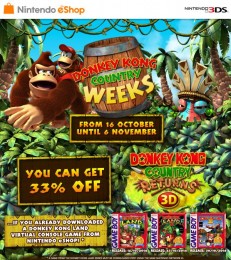 This leaves us with a trio of premium priced downloads and also Survivor â€“ Heroes on 3DS, which appears to be a TV show tie-in. This could actually be a retail release too as itâ€™s Â£27.79. Those other downloads are PAC-MAN and the Ghostly Adventures 2, available on both Wii U and 3DS for Â£24.99, and Winx Cub: Saving Alfea on 3DS, again for Â£24.99.