The handful of new games en route to the Nintendo eShop this Thursday are overshadowed somewhat by two unexpected additions to the Virtual Console library. 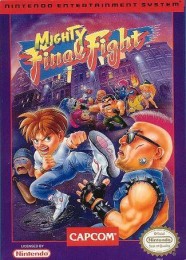 Hot on the heels of last weekâ€™s Street Fighter 2010 comes another curio from Capcom – Mighty Final Fight. Released on NES in 1993 – making it a late arrival for the 8-bit wonder machine – it featured all three characters from the arcade classic Final Fight in comparison to the SNES originalâ€™s two. No witchcraft was performed in order to achieve this – Mighty Final Fight simply featured â€˜chibiâ€™ versions of Cody, Guy and Haggar with tiny bodies and huge noggins.

Oddly, no weapons featured. This was likely a design choice to keep sprite flicker at a minimum and the game running smoothly. To make up for the omission of weapons Capcom saw fit to introduce an XP system that boosted health bars. This system was later carried over to Fight Fight One on GBA.

This isnâ€™t the first time that Mighty Final Fight has seen a re-release – it was part of the GBAâ€™s Capcom Classics Mini-Mix from 2006. Hereâ€™s your second chance to try one of the NES’s best scrolling brawlers, and all for the price of Â£4.49. 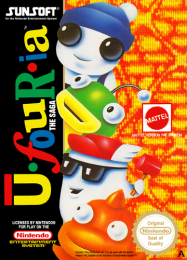 Whereas Mighty Final Fight is due on 3DS, Sunsoftâ€™s Ufouria: THE SAGA is coming to Wii U on Thursday. At Â£3.49 itâ€™s a quid cheaper too.

This colourful platformer from 1991 boasts chunky sprites (by NES standards, at least) and a host of curious critters each with their own strengths and weaknesses. If the lead character rings a faint bell thatâ€™ll be because he went onto to star in the PSone/Saturn puzzler Hebereke’s Popoitto. On a similar fact-packed note, the US release for Ufouria: THE SAGA was cancelled back in the day. It only saw light in Europe and Australia.

The trailer below may whet your appetite for some 8-bit platforming shenanigans:

As for new stuff, thereâ€™s the self-explanatory Painting Workshop on 3DS (Â£3.59), gem smashing puzzler 4 Elements on DSiware (Â£7.19) and 2D platformer Turtle Tale on Wii U (Â£2.49). Those who already own Turtle Tale on 3DS – which has nothing to do with those ninja teens, we might add – can download the Wii U version for Â£1.65. With a Metacritic of just 41% we doubt that many people bought it first time round.

Like always a dollop of discounts round off this weekâ€™s eShop schedule. In addition to a sale comprising of Teyonâ€™s back catalogue, including on-rails shooter duo Heavy Fire: Special Operations 3D and Heavy Fire: Black Arms 3D for Â£2.19 each, three â€˜Metroidvaniaâ€™ titles are receiving a price drop. Those three are the magnificent Guacamelee! Super Turbo Championship Edition (Â£7.79) and Unepic (Â£7.19) on Wii U, along with the apparently pretty good AeternoBlade (Â£6.58) on 3DS. Unepic is pretty good too, gaining a solid enough 70% from the Official Nintendo Magazine.